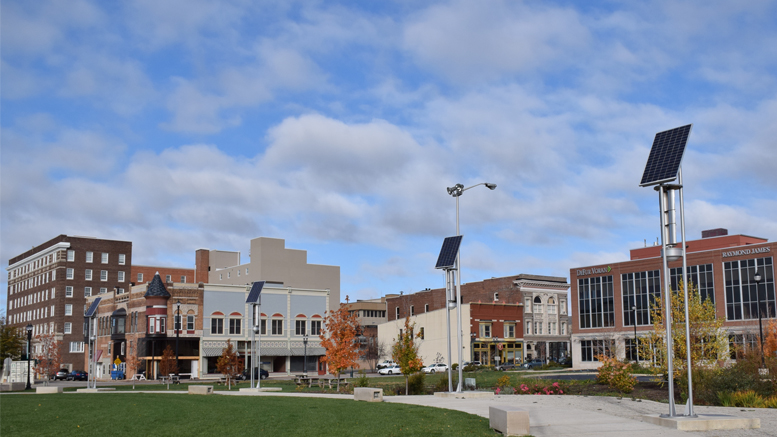 A view of downtown Muncie at the north end of Canan Commons. Photo by: Mike Rhodes

As outgoing president of Muncie Downtown Development Partnership (MDDP), I am pleased to share our 2015 overview of Downtown Muncie. Changes over the past few years have been dramatic.

MDDP is a self-sustained, private, not for profit organization whose functions are only accomplished with the collaboration and support of our many partners. Our development and marketing efforts Downtown only happen with their financial support and on behalf of the MDDP staff and board of directors, we thank you.

Our efforts include acting as a conduit for information and available resources, facilitator/overseer of cooperative community efforts focused on Downtown, including Downtown business recruitment and marketing. MDDP also manages Canan Commons, administers the façade program for the Muncie Redevelopment Commission, co-manages the Muncie Three Trails Music Series, manages over 70 days of our own events and assists with other groups’ Downtown events.

Believing that a City is only as strong as its center or “heart”, MDDP conducts an exhaustive door to door/phone inventory, on an annual basis, of businesses, employees and residents to create and maintain a comprehensive database for potential investors and residents.

MDDP defines the perimeters of the downtown core as: Wysor St south to Victor St and Madison St west to Liberty St. The data gathered is an approximation within the core and changes frequently. Of 258 contacted businesses operating in the defined core, we found that 2,658 people are employed downtown and another 1,097 call that same space “home”.

Possibly more “eye-opening” is the “new” business data. In 2015, downtown welcomed 21 new businesses and 216 new employees. The occupancy rate of developed commercial space continues to hover around 89 to 92%. Available residential occupancy is 98%. MDDP continues to work with other economic developers, and investors to maintain the momentum.

Driving forces behind achieving this designation were MDDP’s approach to development based on a four- point approach: design, promotion, organization, and economic vitality, resulting in a 60% increase in population since 2000.

In 2015, due to the efforts of the City and other organizations working together, Downtown underwent streetscape improvements to become ADA compliant, new construction including the Courtyard Marriott at the Horizon Convention Center, a new parking garage, the Erskine Green Training Center and Walnut Commons. Public/private investment in all 2015 projects combined totaled over $30ML. Downtown also enjoyed the addition of bike lanes and over 300 new, on street parking spots.

The branding campaign is frequently mentioned and complimented by potential investors as being cutting edge and one of the reasons they consider downtown as a location. They are excited that MDDP invests in a successful, reinvigorating marketing campaign. The campaign includes use of billboards, television, newspapers, radio and social media funded by MDDP through Foundation grants and partner contributions.

Development in 2015 didn’t slow down the MDDP events that drew over 40,000 visitors to the area. We want to acknowledge the hundreds of wonderful people who volunteered thousands of hours to ensure our events were successful. We also want to thank the many businesses, building owners and residents who believe in the success of Downtown. And we especially want to thank our partners. Our work can only continue with their financial support.

There is still much to do and we want to invite you to be a part of the fun and excitement that is:
“ DWNTWN The Original Muncie”