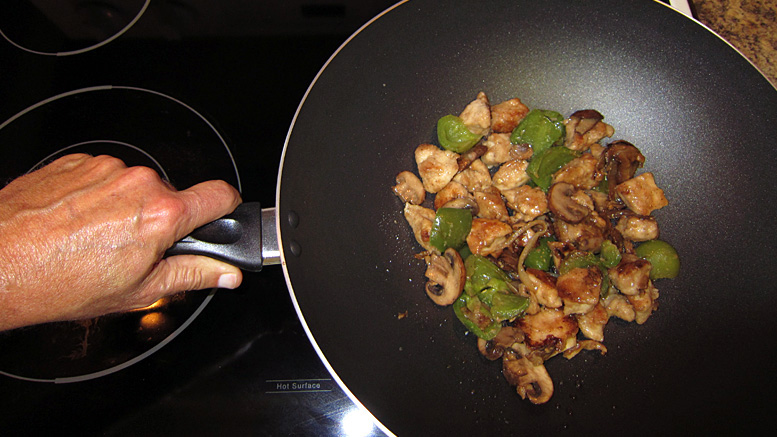 A beautiful new day of health and self-confidence has dawned for me, all without even buying a bunch of Richard Simmons’ workout videos, let alone actually watching one.

What I bought, instead, is a wok.

Well, my wife bought a wok, but I am taking credit for it. You see, we recently took part in a huge, four-family garage sale. What Nan did for this event was gather our sale items, clean them, price them, load them into our pickup truck, haul them to our friends John and Rosanna’s house, unload them, set them up for display and sell them.

What I did was eat doughnuts, drink John’s beer and keep an eye out for robbers.

At first, as you might surmise, I wasn’t all that excited about this sale. But as surprising numbers of bargain-hunters enthusiastically lined up to purchase our cra … excuse me … bargains, I started mentally tabulating my fair share of this unanticipated windfall. After the final accounting, Nan announced we had enough money to go on an overnight getaway to a funky little hotel we love down in Madison, on the Indiana bank of the Ohio River.

True, we’d owned a wok before, but inexplicably, it hadn’t made it to the new house in our last move.

Maybe it was because our last wok’s fate was so murky, but the whole time we were down frolicking in Madison, I obsessed over buying a new one and what it would mean for my future. This came as a surprise because, apart from a casual fling with a Fry Baby in my wilder years, I had never had an intense emotional relationship with a cooking utensil before.

This obsession also had the effect of making me believe that – since I now resolved to eat nothing but healthy stir-fry stuff after returning to Muncie – I should go ahead and clog what space remained in my arteries while I had the chance.

Bypass the lettuce at supper in favor of a yummy blue cheese, cheddar cheese, goat cheese and Bacon Bits salad? You bet!

Extra sausage on that bedtime pizza? Hey, does TV foodie Guy Fieri’s hair look like a startled possum’s? Sure, pile it on!

After eight grueling hours of this cholesterol crunching and marathon munching, it took Nan, the desk clerk and the concierge to waddle me up the stairs to bed that night.

But that’s OK because I now have a wok, and while I don’t want to brag, mine is likely better than yours, the one Nan bought us at Walmart being not only dishwasher safe with a non-stick interior, but also featuring a limited lifetime warranty!

But best of all, everything you cook in it magically turns nutritious. I mean, as I understand it, you can throw in a Big Mac and some Cheez Doodles, whisk them around for a couple minutes, then what comes out is moo goo gai pan or something similar, except it’s orange with special sauce.

Further confirming my new wok’s inherent nutritional properties, is this brief notice I found on its packaging: Made in Vietnam.

Now, I know it’s wrong to generalize about a whole nationality, but when was the last time you heard someone complain, “Boy, those Vietnamese are some real fatsos!” or, “Scoot your butt over and suck it in, Doris, a Vietnamese person is coming”?

That’s because they are slim and trim from cooking on woks, and now I am cooking on one, too. My arteries are unclogging already.

Have a story idea or suggestion for John? Email him at john.carlson@woofboom.com