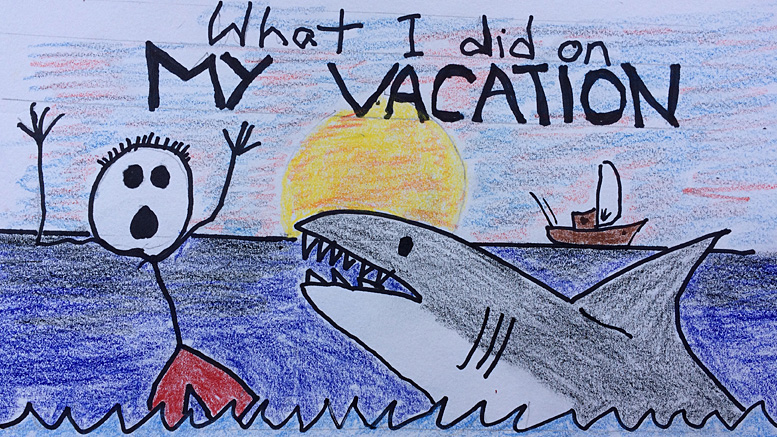 What ruins a fun day at the beach? Sharks! Professional graphic by: John Carlson

Our annual vacation to the Gulf of Mexico is coming up, so naturally I’m getting a trifle twitchy.

I never used to think much about sharks before we started vacationing on beaches adjoining large bodies of salt water. My standard joke was I wouldn’t bother them in the ocean if they didn’t bother me while driving through Clancy’s Car Wash.

This always worked out fine.

But it also sort of explains why my Dad never dipped a toe in the ocean after he was was discharged from the Navy following World War II. See, he never learned to swim a lick, unless you counted straight down. Consequently, when his buddies swam, Dad was always the guy with the rifle on shark watch.

But having shot at sharks back then, he knew better than to tempt fate later, toothy-critter karma being as unforgiving as it is. It’s a fatal fact of oceanographic nature: Sharks hold grudges.

A Caribbean Reef Shark photographed at a depth of 40 feet.  Photo by: Mike Rhodes

My own journey to intense shark mistrust began years later when I foolishly watched a scientific shark documentary. What was its name again?

This was during a matinee at the old Rivoli Theater back in 1976. The place was packed with unruly kids yukking it up, so I resigned myself to a miserable movie-going experience. Then an amazing thing happened.

Nobody had told me that, just to mess with swimmers’ minds, sharks could make extremely scary theatrical noises. But soon as that cute little blonde named Chrissy ditched her bloomers, jumped naked into the water and swam out by the buoy, Jaws elbowed his shark buddies in their cartilaginous ribs and said, “Hey, fellas, watch this!”

Then he went, “Duh-duh,” or something like that, a low and ominous sound that set the horrific tone for the rest of the movie.

Beats me if Chrissy heard it, but from that very first note, not a kid in the Rivoli squeaked. Well, except when Jaws ate somebody, such as Chrissy. In that case the theater echoed with blood-curdling screams, which didn’t bother me much because I was screaming louder than anybody.

It took years to get over my shark phobia. I’d even get nervous watering the lawn. But I finally overcame my fears by the time Dad took our whole family on vacation to the North Carolina coast. You could tell he still thought sharks had it in for him, though. All week long he just stared out at the water, squirming in a beach chair like a man in desperate need of some MiraLAX. It was as if he were waiting for a shark to swagger onto shore, poke him hard in the belly and sneer, “Aren’t you that little jerk with the rifle from Okinawa?”

That was ridiculous, of course. To show Dad there was nothing to fear, one day I set off down our beach for a leisurely stroll. I hadn’t gone fifty yards when I spotted what appeared to be a mackerel bobbing in the waves against the shore.

Then I looked closer. It was a baby shark.

I had never seen a shark in the flesh before. Being dead, this one didn’t scare me … much. Besides, at just over a foot long, even if it had roared back to life and attacked, the most it could have done was nibble at my kneecaps or something. But this was the very same water in which two generations of my-Dad-the-shark-shooter’s offspring had just been flabbily frolicking, as fat and tasty as a crock full of Swedish meatballs.

Had this little shark heard about Dad and come looking for him?

Worse yet, for us?

Shark-wise, you had to admit, it seemed a perfect time for some payback. More importantly, I knew where there were baby sharks, there had to be mommy and daddy sharks anxious to join Junior at the seaside smorgasbord.

But then I thought, get a grip! I’d spent enough hours in Sunday school to believe that Jesus had walked on water. Now, anyone who knows me will agree I am a far cry from Jesus. But deep in my heart, I had faith that were I in the water when a shark fin broke the surface, I would beat Jesus back to shore, miraculously hopping from wave to wave to plant my butt in the safe, dry sand.

Happily, it didn’t come to that.

Hopefully that’ll be true of this vacation, too.