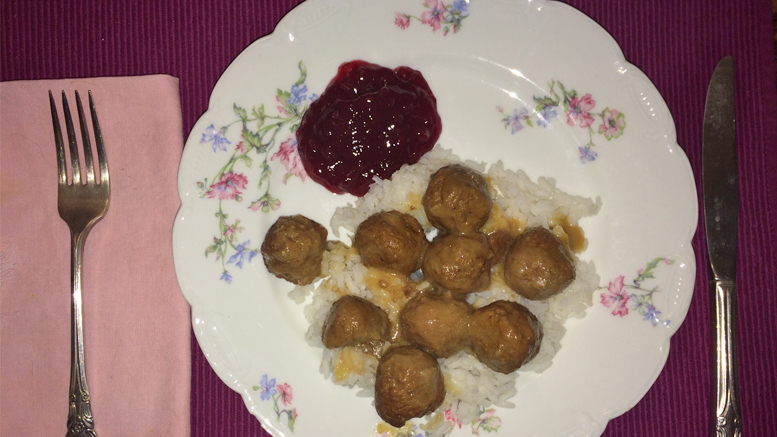 Swedish meatballs on rice with some lingonberry jam. Photo by: Nancy Carlson

Not long ago, my wife met my daughter down at Indy’s new IKEA store for some female bonding while shopping.

Unfortunately, I was unable to join them there amongst the frantic bustling of the excited shopping hordes, mostly because I’d have rather been dead. I must say, however, that included in the load of crap … er … items Nancy hauled back home was one thing even I could use, it being a bag of frozen Swedish meatballs.

As a guy with Swedish relatives and a Swedish flag tattooed on my left arm, my admiration for Swedish meatballs – the meatballs of my ancestors, the Vikings – is probably not surprising. For supper a couple days later, Nancy threw these meatballs into our slow-cooker, then poured in a couple of the fragrant Swedish meatball gravy mixes on which she had also splurged. That evening we ate like Swedish royalty, also enjoying the traditional Swedish lingonberry jam she had brought home.

Tell you what, though. Based on the simple fact we had meatballs, any sort of meatballs, I could have told you beforehand this supper was going to be pretty satisfying, me being what you might call a “meatball aficionado” or “meatball enthusiast.”

I remember growing up on my Mom’s meatballs, which technically my family always referred to as “porcupine balls.” Sure, before you could enjoy them, you had to get past that rather unfortunate word association. But when you realized they were simply meatballs the size of tennis balls, dotted with rice the way quills dot a porcupine’s backside, you were on your way to gaining true meatball enlightenment.

It’s been more than 30 years since I’ve eaten a good old porcupine ball, the realization of which now both shocks and saddens me.

And another observation, now that I think about it. Mom’s porcupine balls were always kind of delightfully lumpy and lopsided, having been rolled into the semblance of balls in our tiny, crowded kitchen by her two loving hands. All those new Swedish meatballs from IKEA? They were perfectly uniform, perfectly rounded, probably having been spit out of some meatball factory’s meatball extruder at a rate of about 10,000 a minute. If Sweden has its own version of the Occupational Safety and Health Administration, I bet Swedish workers by the hundreds are reported wounded on the job each year by flying frozen meatballs.

They resemble nothing so much as big meat BBs.

Which brings up something else. We hear an awful lot about fake news these days. But maybe we should be more concerned about fake meatballs if, like yours truly, deep down inside you believe only homemade meatballs qualify as the absolute real deal.

She’ll probably get all emotional when she reads this, but the greatest meatballs I’ve ever eaten were Nancy’s cocktail meatballs, which are sort of the meatballs equivalent of cocktail weenies. Little? Lumpy? Lopsided? You bet. Most of them looked like they had been rolled by Ronnie Milsap. But having been mixed with grape jelly and my buddy Lathay Pegues’s excellent barbecue sauce, JohnTom’s, we ended up with meatballs that I couldn’t stop eating.

By this, I’m talking to the tune of 20 to 30 meatballs at lunch. I’d eat them until I was starting to groan, then swear that if I never saw another meatball again it’d be too soon. Five hours later suppertime would roll around, and after an exhausting afternoon spent sitting at my desk drinking coffee and typing, I’d be ready to eat 20 to 30 more meatballs.

But hey, rolling a couple hundred lopsided little cocktail meatballs takes time, and even though she’s retired, my wife is way too busy to do so every week.

For right now then, I guess I’ll shut up, finish eating the Swedish meatballs from IKEA and like them. Just don’t expect me go buy them myself.