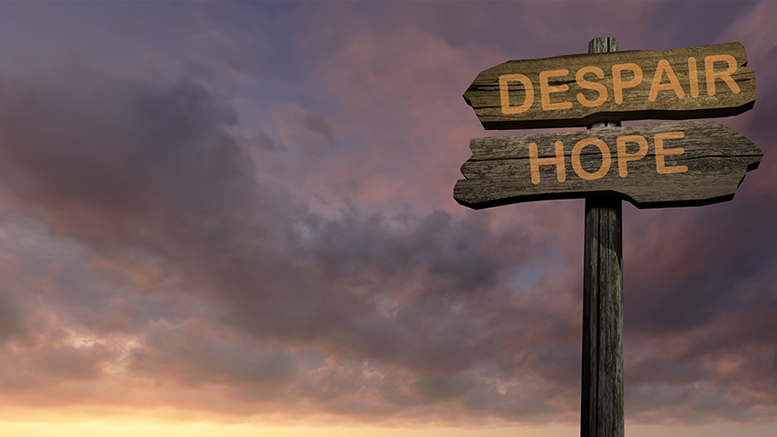 During World War II an Austrian psychiatrist named Viktor Frankl was sentenced to the Auschwitz concentration camp. While he was living in the midst of pure misery, Frankl noticed that his fellow prisoners had different reactions to their circumstances. They were all exposed to the same levels of torment and trauma. Yet, some of them seemed to waste away and die, while others continued to press on and live.

What seemed to stand out to Frankl was a sense of hope. He made the observation that those who had a reason for hope also had a greater chance to live. He went so far as to write that the immune system must be tied to the sense of courage and hope. In his book Man’s Search for Meaning, he wrote that “the state of immunity of [a man’s] body will understand that sudden loss of hope and courage can have a deadly effect.”

I can imagine that the earliest followers of Jesus of Nazareth had a similar loss of hope. For three years they had followed him. They had listened to his teachings and believed that he was going to bring about a revolution. Their country was being controlled by corrupt governments and morality appeared to be at an all-time low. Even those who were supposed to be religious leaders had turned out to be hypocrites.

Jesus began teaching something new. He was bringing about a change that the people in Israel desperately needed. He was challenging those who were in power. He challenged those who had the responsibility to change things, but failed to look past their own selfish interests. It looked like this was really going to happen. Everything was going to be good once again.

In the shadows late one Thursday night Jesus was arrested. The hope of the world was put on trial. His followers could barely even watch as the political powers in charge stripped Jesus of anything that remotely resembled dignity. Hope was being lost in front of their very eyes. Maybe you can relate. Maybe you’ve had to sit idle as the very thing that offered you hope was stripped away by one injustice after another.

For the next few days, his followers tried to make sense of everything that had happened. What should they do now? Where should they go? Jesus said that he was going to bring the Kingdom of God, but how? How could he now that he was dead? How could anything good possibly happen now that evil had won?

As Viktor Frankl discovered, and maybe as you’ve discovered in your own life, hope is never lost. Even in the deepest recesses of the most miserable prison camp on earth, hope lives. Even when the very thing that you thought would save you looks dead, hope is still alive. Those who have hope continue. Those who find hope can thrive.  Hope does exist and it is life giving.

Easter morning proved that hope is never really dead. As Jesus’ tomb was opened and his body emerged from the shadows, all doubt and despair had to flee. Hope stood alive in the risen body of Jesus Christ.

Many people will have big family celebrations this Easter. Kids will hunt for colorful eggs. A magical bunny will make its way into many homes to drop off baskets of candy. People will buy new Easter outfits and find themselves sitting in a church sanctuary. For a moment this will distract us. It will distract us from all of the things that cause us to lose our hope.

That may feel good, but we don’t need to be distracted. We need to find hope. We need to find purpose and meaning. With the new sense of hope we can press on. We can thrive. Our community can be alive once again. That hope is found in Easter. It is found in a Jesus who rose from the grave and is offering a new way, a different way.