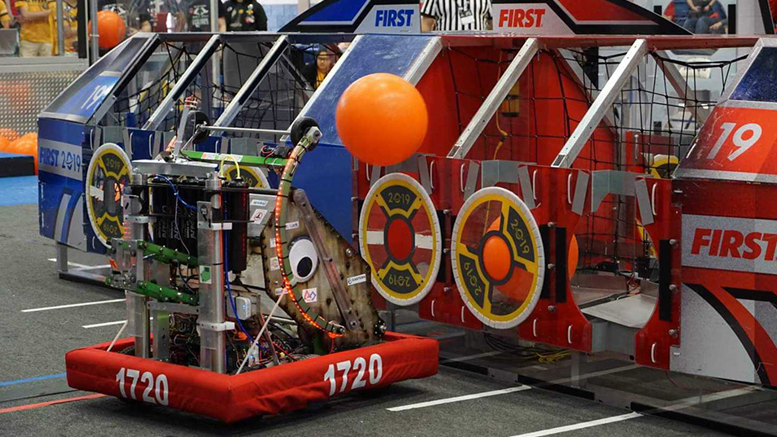 Muncie, IN—Local robotics Team 1720, The PhyXTGears, has had an “out of this world” season. And it’s not over yet.

On Wednesday, April 24, the team will travel to Detroit, Mich., for the FIRST World Championship competition.

The team, ranked third in the state, qualified for the prestigious competition after finishing second (for the third year in a row) with its robot, Space Walrus, at the IndianaFIRST State Championship in Kokomo April 12-13.

This is the fourth time in five years the team has qualified to compete at Worlds.

“Considering how many knowledgeable seniors were on the team last year, and have now graduated, we have done very well this season,” said team member and Burris Laboratory School student Robby Sammelson. “All of the younger members, and new members, of the team really stepped up this year, allowing us to make it to Worlds for the third year in a row.”

The World Championship marks the end of the 2018-19 “Deep Space”-themed robotics season, with more than 70,000 students, coaches, and supporters from more than 70 countries participating in Detroit and Houston.

PhyXTGears finished third at its first district event in Mishawaka (March 8-9) and placed second as finalists at its second district competition in Lafayette (March 22-24).

“This has been an amazing season for our team so far!” said Team President Shawn Van Ness. “We were supposed to be in a rebuilding year with the huge number of new students we have. Their consistency, thirst to learn and enthusiasm has been awesome. I am very proud to lead such a great group of students and mentors! PhyXTGears is doing an excellent job representing Muncie and the surrounding community!”

Top mentor in the state

The award “celebrates effective communication in the art and science of engineering and design” and “recognizes an individual who has done an outstanding job of motivation through communication while also challenging the students to be clear and succinct in their communications.”

Koch, who has been involved with the team more 14 years, was recognized as the top mentor in the state and is now a finalist for the World Championship Woodie Flowers Award in Detroit.

“I was completely overcome,” he said of the moment when his name was announced.

“I do this because it’s part of who I am. I feel like I have so many blessings that I should be giving back and I do.”

He said that as a mentor he is not paid to work with the students, but he is definitely rewarded.

“I get to see these students build their confidence, lift each other up and teach them things they didn’t know before coming here. Seeing them become something you knew they could become but before they came here,theydidn’t think they could become….that’s a great thing to see.”

The team is far out, literally

PhyXTGears is also in orbit right now. Well, sort of.

Members of 1720 recently created a small satellite (ThinSat), capable of transmitting data from a low earth orbit, that was launched April 17 on the Northrop Grumman Antares rocket and Cygnus spacecraft from the Wallops Flight Facility in Virginia. It is currently transmitting data back to Earth!

Team 1720 PhyXTGears (pronounced “fixed gears”) first competed in 2005. This season, PhyXTGears has 29 student members and 17 student and adult mentors from Delaware County and beyond. The team’s home is located in the MadJax building in downtown Muncie.

FIRST is a non-profit organization that focuses on inspiring students in STEAM (science, technology, engineering, art, and math). FIRST, among other things, sponsors an international robotics competition where high school students and adult mentors get a chance to express their excitement about technology and compete in a challenging and fun atmosphere.

For more about the team, go to www.phyxtgears.organd the Facebook page www.facebook.com/frcteam1720