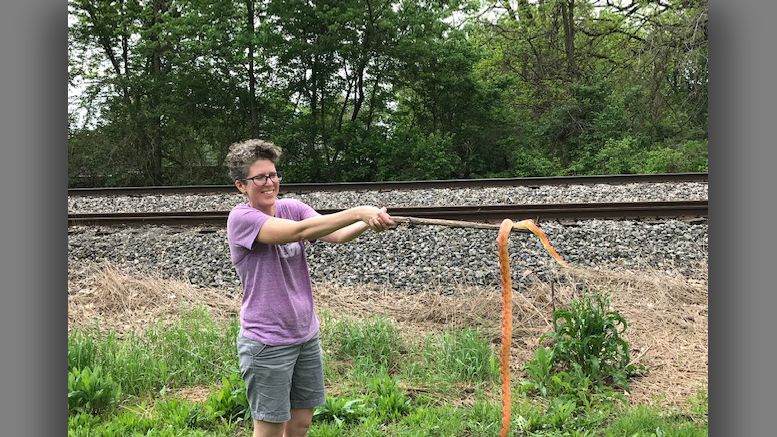 The other day, Nancy was looking at our church friend James Thompson’s Facebook page when I heard her coo, “Awww. Look at that. How cute!”

What she actually cooed was “AAACCCKKK!!! Look at THAT!!! We’re all gonna DIE!!!” This is because she was staring, transfixed, at a picture of James’ smiling daughter Rachel holding a stick, and hanging from the tip of that stick was a big snake.

Specifically, this was a bright-orange snake, one which I would estimate was approximately sixteen-feet-long. Admittedly, I have never seen a snake whose length I didn’t over-estimate by at least ten feet, so in reality this snake was probably more like six-feet-long.

But that still makes what an amateur herpetologist such as myself would scientifically classify as “one long-assed snake.”

Naturally, upon seeing the picture, my mind rifled through images of all the orange snakes I’d ever encountered. Frankly, there weren’t many. However, I decided this must be the rare but extremely deadly – which is even more deadly than just plain old deadly – Cheez-Doodle Viper, so named because it’s the color of Cheez-Doodles.

As Nancy constantly reminds me, there is only one thing in life she fears, and that is snakes. In truth, it is about the only thing that we, as a cranky old married couple, agree upon. I am a total snake chicken, too. But by now she had calmed down enough to inform me this was actually a corn snake. Hearing that, I gulped. Didn’t corn snakes hide in ears of sweet-corn until you were stripping off the husks for a corn-on-the-cob boil, at which point they’d pounce and kill you?

Seemed reasonable … but no, she assured me, corn snakes are harmless.

Of course, as wise people say, “denial” ain’t just some river in Egypt. Therefore, I maintained the picture of this snake wouldn’t normally have bothered me in the least. Instead I’d have simply convinced myself the picture was taken while Rachel was vacationing at a place named Bango-Wango or something, thousands of miles from Muncie on the remotest island in, say, the Golfo de los Mosquitos.

Turns out Rachel had found the little darling just off West Jackson Street. Thus, it was residing no farther away from my home – and more to the point, me – than I can drive a golf ball, which on a good day is commonly about fifty yards, assuming it’s rolling across pavement.

This brought to mind a note I had recently seen on the May 13 square of my official Outdoor Indiana 2019 calendar. Just a couple weeks before, the note reminded me, Brown County State Park had hosted its popular Snake Fest.

Snake Fest? I mulled the thought dubiously.  There’s a fest? A fest for snakes? My initial response was, snakes seemed odd things to hold a fest for. If you could hold a fest for snakes, I wondered, what was coming next? The Pain and Itch of Hemorrhoidal Tissue Fest?  But the DNR asserted that Brown County’s Snake Fest gave inquisitive Hoosiers a welcome chance to “get up close and personal” with snakes.

Googling “Indiana snakes,” I further learned there are thirty-nine native Hoosier snake species. The overwhelming majority are snakes with positive outlooks on life who come from good homes with caring parents, snakes who go to church, enjoy high school basketball and have rosy dispositions. For example, there’s the Chicago Garter Snake, a snake you could conceivably take to a Cubs game. There’s also the Butler’s Garter Snake, which sounds like a perfect gentleman. There’s even the Queen Snake, reportedly named in honor of the late Freddie Mercury.

But our state is also home to some virulently anti-social snakes, like Northern Copperheads, Timber and Eastern Massasauga rattlesnakes and even Western Cottonmouths. The copperheads, being less aggressive, you could at least reason with, this Indiana snake chart hinted. The other three? Not so much. In fact, it warned that they were basically cigarette-smoking, foul-mouthed, switchblade-toting snake punks, which was all the info I needed to spurn their company.

That’s assuming, of course, I haven’t mixed it up with the deadly Cheez-Doodle Viper.