Smoke enshrouds the scene during a cannon demonstration. Photo by: Nancy Carlson

When traveling back in time to Shiloh, a modern SUV has it all over hoofing your way there, or even sailing down the wide Tennessee River in steam-driven paddle-wheelers like thousands of Union troops did in 1862.

Your air is coolly conditioned, for one thing, and the roads are smooth and true. They lead you past barbecue joints billowing fragrant smoke, and beautiful blue-roofed schools seemingly built in the middle of nowhere. It’s also worth noting, the roads lead you past lots more American flags than Confederate ones.

More to the point, though, visit Shiloh these days and, despite official warnings about the potential for venomous snakes in the grass, your chances of dying there are remote.

In 1862, that wasn’t so. Shiloh is that infamous place you learned about in Civil War history, assuming you weren’t screwing around in class. In fighting from April 6-7 of the aforementioned year, forces of the North and South suffered 23,746 casualties, killed, wounded or missing. For the record, that two-day toll of pain, loss and misery exceeded the total casualties for every preceding conflict Americans had fought, beginning with the Revolutionary War.

The trajectories of the battle at Shiloh are expertly plotted in a map they hand you at the national military park’s information desk. They are also presented on-screen in a fine movie, one that brings the true stories of selected soldiers – from generals to privates – into realistic focus. Besides all that, there is a thirteen-mile road that unerringly takes you past sobering points of interest from the battle. A couple are mass graves, left intact after the war, in tribute to the dead who fill them, and the Shiloh Meeting House, from whence the battlefield got its name. Among other sites there’s the thick woods called the Hornet’s Nest, where flying musket balls snuffed the life from hundreds. And there’s Bloody Pond, the small body of water that turned red while soldiers from both sides sought cleansing relief from their gaping wounds.

But this place is as rife with somber atmosphere and mood as it is with the brutal facts of war.

That being the case, don’t bother looking for any Golden Arches outside the battlefield site, nor  convenience stores stocked with energy drinks, candy bars or Battle of Shiloh T-shirts. What you encounter, instead, is a vale of heavy silence, still weighted by what happened here nearly one-hundred-sixty years ago.

You will see neatly welded pyramids of cannon balls, though, and many old cannons like the ones that fired them. You’ll also see poignant memorials to the military units, from North and South, that engaged in the epic battle. They include ones commemorating Hoosier soldiers from the 9th Indiana Infantry, which was formed in Indianapolis and – who knows? – may well have included some men from here. 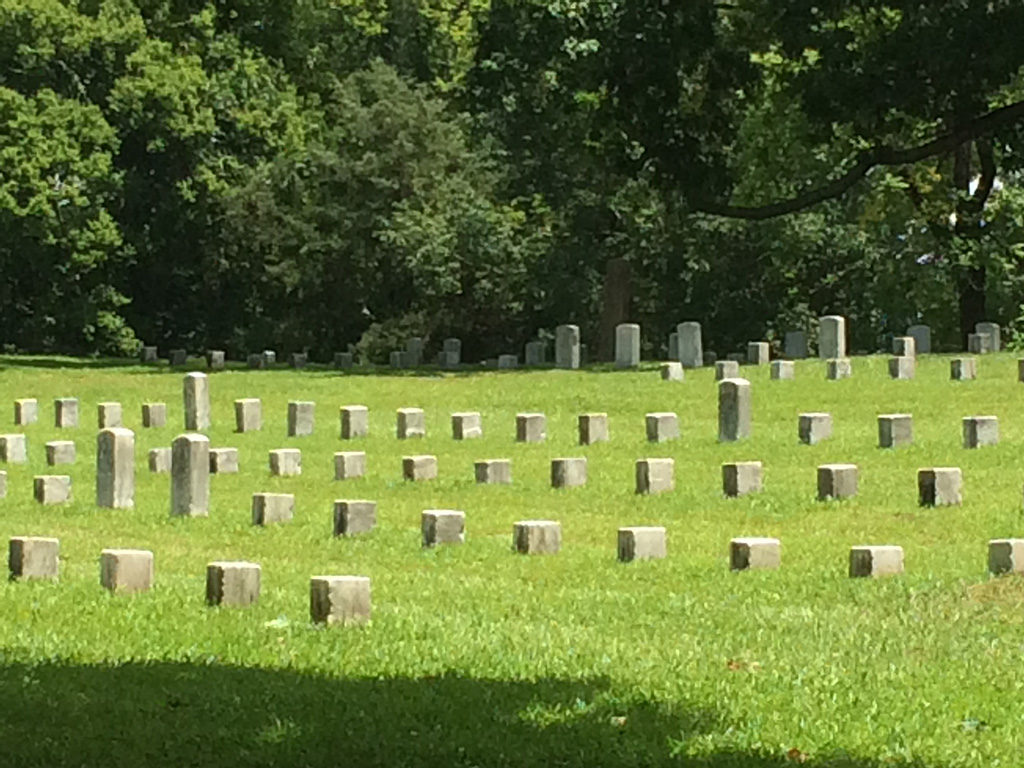 But these days, it’s so quiet the most pronounced sounds come from the birds twittering in the trees, and the occasional low-rumbling Harley-Davidson as it chugs into a spot in the visitor’s center parking lot. That’s true, at least, until the appointed times for the cannon demonstrations. Follow other visitors across a field and you’ll reach where the operation of such weapons is fully explained, then shown.

It is, indeed, a loud, smoky bit of theater that jarringly echoes across the fields, a sound at which you might momentarily jump, then smile at the novelty.

But then, hopefully, you think what that sound would be like, multiplied thousands upon thousands of times over a period of just two days. You also hopefully think, sound is one thing. What the demonstrations can’t capture is the impact those cannon balls wrought to flesh and bone among the soldiers caught in their way. That would be absolutely mind-numbing.

In its own way, the look of your fellow visitors here is striking, too. These folks, yourself included, are modern Americans, products of the plenty we have come to expect as a given, as our natural right. Watching the Shiloh movie, though, you hear about an opening Confederate attack on a Union camp filled with untested troops, and how the Rebels pillaged Union supplies until a furious general ordered them forward.

“But sir,” one soldier reminds the general, who would be dead within hours. “We haven’t eaten in three days.”

Inside the pleasant visitor center, there are Union and Confederate uniforms you may try on, plus hygiene items like a toothbrush – remarkably similar-looking to a modern one – you may hold. There are even pieces of hardtack you can sample, though you probably wouldn’t be tempted to … unless you hadn’t eaten in three days.

The detritus of the battle is collected here, too, including what seems particularly personal items in the form of soldiers’ lost pocketknives, recovered from the field. How many of them, you wonder, had some lovesick boy used to carve a special girl’s name into the trunk of a tree on the way to his death?

Speaking of sharp things, there was also the ghastly surgeon’s kit, filled with tools whose use you’d only ponder in a nightmare. And while it wasn’t in this kit, the indentation for the hacksaw could be made out, too, it being used for severing mangled limbs. Near this kit, meanwhile, was a letter from Sgt. Freedom Gates to his wife, Elizabeth, and their year-old daughter, Ada.

A Buckeye, he had found his way to Shiloh from way up north in Clyde, the town a legendary writer named Sherwood Anderson would later re-christen “Winesburg, Ohio” in his famous 1919 novel.

But Sgt. Gates also had a way with words. Understatement, too. Writing from a hospital, he told his wife he’d been shot through his left arm, “and the sensation that followed was anything but pleasing.” He went on to note that troops of his 72nd Ohio Infantry had acquitted themselves well at Shiloh, but admitted the doctor had already told him nothing would save his arm.

As it turned out, that was a moot point. Not long after writing his wife, he died of his wound, leaving Elizabeth without a husband, and little Ada without a father.

But like a single cannon blast can’t begin to illustrate what the battle for Shiloh sounded like, neither can Sgt. Gates’s story, until you multiply it by 23,746 times, 23,746 tragedies, 23,746 broken lives. Think about that, and then about the traumatic experiences countless other young soldiers took away from the battlefield, way before anyone had heard of post-traumatic stress. You get some idea of the terror and horror, the courage and fortitude, those men invested in a conflict that would claim more than 620,000 soldiers before the Civil War ended three years later.

All of which made the sunny sky above our recent visit to Shiloh seem a bit incongruous. Shouldn’t it have been weeping rain?