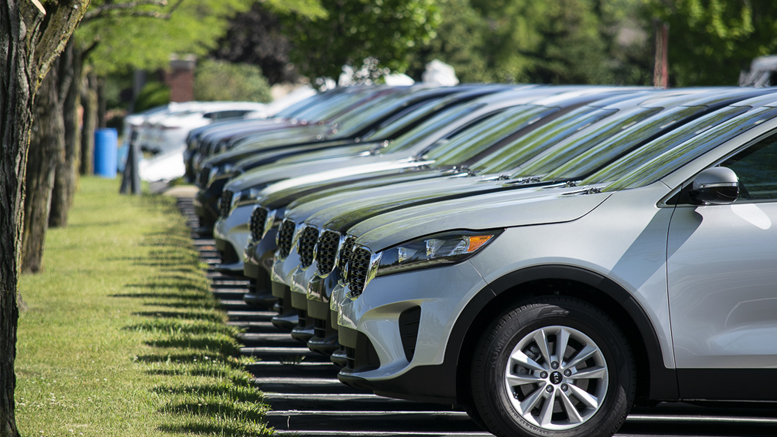 Cars arrive at the Toyota of Muncie tent sale in the parking lot by Ball State's Scheumann Stadium. Photo by: Mike Rhodes

Muncie, IN—Every summer, Toyota of Muncie holds a tent sale in the parking lot by Ball State’s Scheumann Stadium. I happen to live close by.

Every year I ask myself, “How do they get those cars over to the stadium so fast?” It’s like magic. One second the parking lot is empty and the next time I drive by, the lot is full of new and used cars for sale. I’ve often wondered how they do it so quickly. Did they have some sort of StarTrek transport device that would simply “beam” the cars over from one side of town to the other?

Was there some secret Muncie-based black hole, known only to the dealership and extraterrestrials, that would annually suck vehicles into it and drop them like clockwork onto the stadium parking lot?

I mean you never see a 1/2 mile long line of bumper-to-bumper Toyotas and Kias heading up McGalliard and slowing down traffic, right? So how do they get there?

This year I decided to track down Chad Castor, general manager of Toyota of Muncie and find out how the magic happens.

“It’s chaos,” he said. “Organized chaos, but still chaos. We basically get everyone at the dealership except for service to help out. We have past employees, retirees and others that come and help us. Today, we have about 65-70 people helping out moving cars.” Castor said they started moving cars at 6am and would have all cars at the stadium by 1pm.

Moving 700 cars in a few hours may not require magic, but it sure seems like it to me.