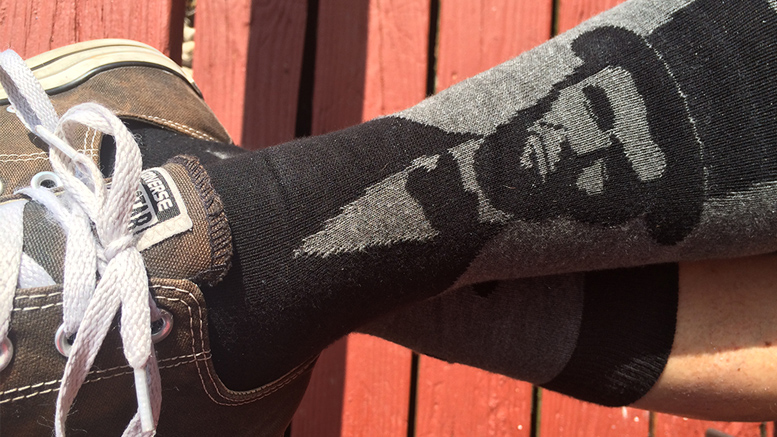 Nothing enhances a foot’s look like an Abe Lincoln sock. Photo by: Nancy Carlson

As a skinny, hairy, elastic-lipped life coach named Steven Tyler notes when singing the lyrics to “Amazing,” one of his band Aerosmith’s big hits, “… life’s a journey, not a destination.”

Actually, maybe it’s both. So it was that Nancy and I journeyed to her family reunion recently in Springfield, Ill.

My favorite part of the weekend? Without question it was getting to know Ben and Abby’s son Will, who was two weeks old at the time. Not having held a baby since holding my own approximately eighty years ago, I was amazed how I took to this little pink guy, even to the point of softly singing him “Louie, Louie.” This worked really well until at one point his eyes popped open, he flashed me a skeptical look that said, “What the …” but then immediately zonked back off to sleep.

As for other attractions in Springfield, keep in mind it is Abe Lincoln’s old stomping ground. There’s Lincoln’s House. Lincoln’s Tomb. Lincoln’s Bank Ledger. The Lincoln-Herndon Law Offices. Lincoln’s Memorial Garden. There’s also Abe’s Hideout, the bar where he’d go to ditch Mary Todd and down some brews with his buddies, though this hasn’t been fully historically authenticated yet.

So how was it? Beats me. I didn’t visit any of that.

As it turned out, my Lincoln experience was largely limited to what I have come to think of as my “Abe’s Feet Tour.” The first stop was at Lincoln’s Memorial Souvenir Shop, where Nancy bought me a cool pair of Abe socks, complete with his portrait woven into the fabric.

I love ‘em, though I wouldn’t have minded getting the “I Miss Abe” T-shirt, too.

The other stop on my “Abe’s Feet Tour” was the site of a cabin maybe an hour’s drive from Springfield, the last place he lived with his folks before heading out on his own. In a double blow during the single year the Lincolns stayed there, the family became ill with ague and depleted their food as nature unleashed an horrific winter storm. With nothing to eat, Abe set off for a cabin two miles away to ask for food, but on his way broke through ice covering the Sangamon River and soaked his feet. By the time he reached the cabin, they were frozen.

For a week, the woman there applied a mixture of “goose grease, skunk oil and rabbit fat” to Abe’s feet, which saved them, though chances are they didn’t smell all that great.

That was it for my Lincoln stuff, but I figure that was a lesson in what kind of guy Abe was, even as a young man.

But there’s more to Springfield than Abe Lincoln.

There are also corndogs.

Leaving our motel en masse one day, about twelve of us made our way to the Cozy Dog Drive In. It’s  kind of a funky little place that was packed with corndog enthusiasts, and more pushing their way in every minute.

You don’t have to settle for corndogs there. You can get chili and burgers and even a dinky little thing they refer to as a pork tenderloin, which is sure to leave any red-blooded Hoosier choking in fits of laughter. But the corndog, aka Cozy Dog, is king. As deep-fried by founder Ed Waymire for hungry GIs  visiting a USO center during World War II, it was originally known as a “crusty cur.” Anyone who’s owned a crusty cur will immediately understand why a more appetizing name was soon called for. Now, the Cozy Dog Drive In is a landmark eatery along Route 66, and was also the site of a “Man v. Food”episode broadcast on the Travel Channel back in 2009.

Maybe I missed it, but I didn’t see anything about how many Cozy Dogs the original host of “Man v. Food,” Adam Richman, downed during his visit, nor whether man, or food, won. I’m pretty sure it was an impressive thing to witness, though.

By the way, if you’re sick to death of arguing about politics these days and figure corndogs should be a safe topic to walk into a bar and begin expounding upon, make sure you’re not in Springfield. Within sight of Lincoln’s Tomb, there’s a dark, somber, rectangular grave marker that reads simply, “Bob Vose, The King of the Korndog.”

All of which leads to my final family reunion food report, this from our last day. Heading to a certain little town with Nancy and her sisters Bev, Margi and Marti, Bev announced we were going to a highly regarded tea shop for lunch. In keeping with the appreciative ooh-yummy hum emanating from my wife and sisters-in-law, I began clapping approvingly.

The whole time I was clapping though, I was praying, “Pleeeease, Jesus! Not a frickin’ tea shop!” And lo, it came to pass that after parking in front of the shop, Nancy announced, “Hey, it’s closed.” Kicking at the pavement, I moaned, “Awww. And I was gonna have a steamy cup of lapsang souchong.”

But wouldn’t you know it? Right next door was an open sports bar with burgers and beer.

So never forget, folks. Where there is life, there is hope.

A former longtime feature writer and columnist for The Star Press in Muncie, Indiana, John Carlson is a storyteller with an unflagging appreciation for the wonderful people of East Central Indiana and the tales of their lives, be they funny, poignant, inspirational or all three.  John’s columns appear on Muncie Journal every Friday