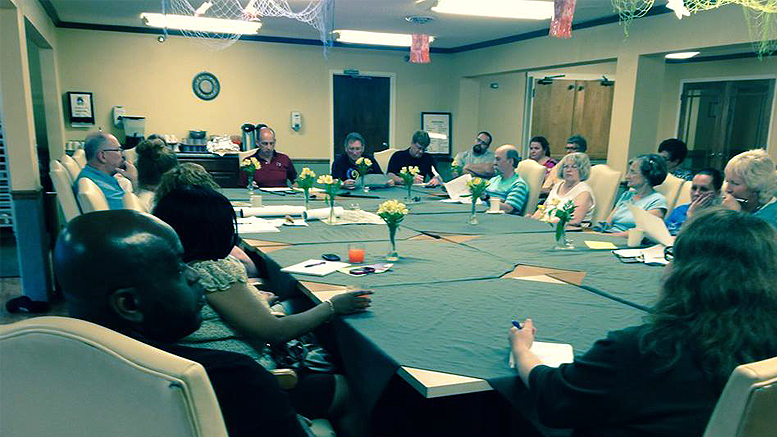 An early meeting of the Ludingwood Neighborhood Association. Photo provided

Muncie, IN—The Ludingwood Neighborhood Association, Inc., accomplished a major milestone last month when it secured the required number of signatures among its residents to eliminate racist language from its covenants.

The Ludingwood Neighborhood Association, Inc., (LNA) was formed in December of 2014. One of its first orders of business was to remove language from the original covenants, written when the neighborhood was established in 1946, that prohibited people from “any race other than the caucasian race” from living in the neighborhood. People of non-caucasian races have lived in Ludingwood for many years, but the LNA wanted to remove the language nonetheless.

Revised covenant language was approved by the LNA in April 2015, and since then various members of the association have been canvassing the neighborhood in an effort to get the required number of signatures to make the change official. The last required signature was secured on July 11, 2019, and the new covenants were officially recorded by the Delaware County Recorder on Aug. 8.

Officers of the LNA include Bob O’Bannon, president; Jason Turnbill, vice president; Larry Ottinger, secretary. Respected Muncie citizen Dick Shirey, who passed away in March, was a longtime Ludingwood resident and one of the primary initiators of the LNA.

LNA is a 501(c)(3) non-profit public charity. It charges no dues and operates solely on donations and volunteerism.