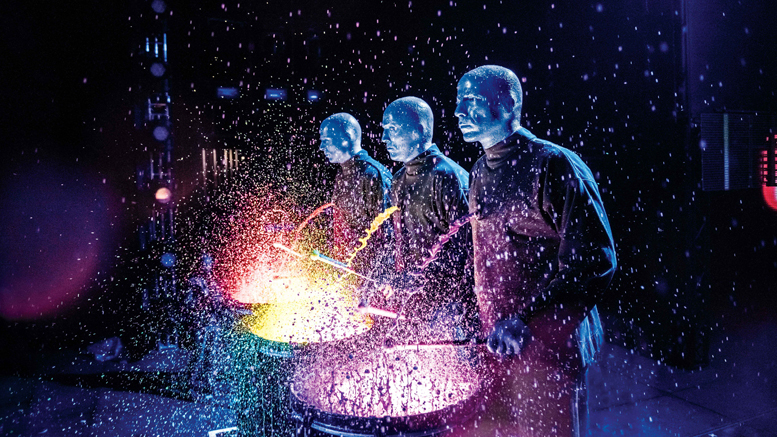 Tickets go on sale to the general public on Friday, September 13th at 10am and are available at Ticketmaster.com, by phone at 800-745-3000 or in person at the Emens Box Office.

Under the helm of visionary director Jenny Koons, in her first-time collaboration with Blue Man Group, the world-renowned bald and blue trio embark on a fresh journey of discovery through this tour, the result of 27+ years spent observing humanity. “By building on the original DNA of Blue Man Group, Speechless will forge a path for future generations of the Blue Man tribe to explore,” said Diane Quinn, Cirque du Soleil Entertainment Group’s Chief Creative Officer. “To further challenge themes of invention, curiosity and human connection, we are excited to work with our new director, Jenny Koons, whose expertise in dissolving spatial boundaries and diverse background in theater and activism, set the stage for us to deliver a transformative Blue Man Group experience.”

Jenny Koons is a New York-based director who comes to Blue Man Group having recently completed productions of Between Us: The Deck of Cards with the Denver Center for the Performing Arts, A Midsummer Night’s Dream with The Public Theater Mobile Unit, The Tempest with The Juilliard School, and Burn All Night with the American Repertory Theatre. Koons was an artist in residence at Philadelphia School of Circus Arts, SPACE on Ryder Farm, and The Invisible Dog Art Center and has developed new work at Ars Nova, Steppenwolf, Joe’s Pub and the Roundabout Theatre Company. Jenny was the 2017 curator of New York City Center’s Encores! Off-Center Lobby Project, co-curator of the 2016 Toronto ThisGen Conference, and co-founder of Artists 4 Change NYC (National Black Theatre). She is a proud 2017 Lilly Award recipient.

“It’s Blue Man Group’s continued commitment to push boundaries, and think bigger and bolder with every new exploration, that excites me most about this opportunity, and I’m thrilled to join the Blue Man Group family to undertake this new show,” said Jenny Koons, Director of the Blue Man Group Speechless Tour. “Speechless will feature material that fosters communal moments, debut the evolution of our tube-based instruments to support all new music, and include large-scale audience participation. It is my hope that this show will deliver on its name and continue Blue Man Group’s legacy to transcend words and inspire audiences through non-verbal connections.”

Working in collaboration with Jenny Koons on the Blue Man Group Speechless Tour is Blue Man Group Creative Director Jon Knight. The tour is produced and promoted in partnership with NETworks Presentations.