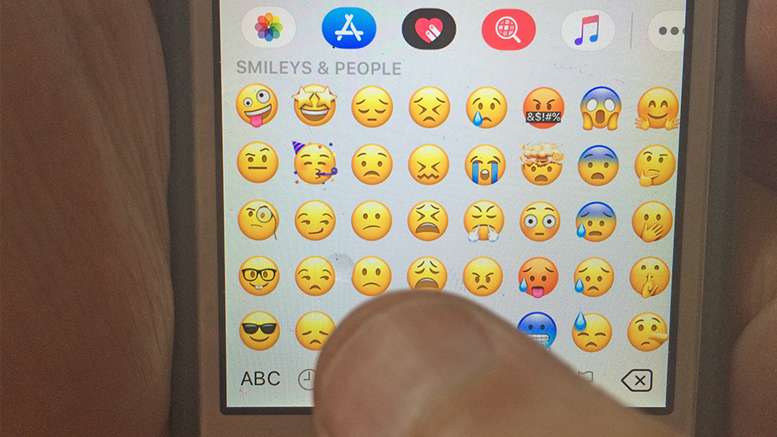 At least scrolling past emojis keeps your fingers nimble. Photo by: Nancy Carlson

That was all I could think the other day when I stumbled upon my iPhone’s trove of emojis.

To preface this, I should note that I am not someone who is “with it” on modern technical advances such as light bulbs, channel changers or using those things that have come to be known as “devices.” Like, not long ago I wrote a post complaining about trying to use my iPhone’s camera to photograph a couple butterflies out back, but the insolent little jerks kept disrespecting me, flying away every time I crept near.

So my good friend Jen Merritt wrote me to say, essentially, “Why didn’t you just use your phone camera’s zoom, you nitwit?”

To which I replied, “Zoom?”

So anyway, I didn’t even understand what emojis – which originated in Japan – were until about six months ago. Before that, for all I knew, an emoji was the site of a groin injury suffered by Japanese guys who toppled to the ground clutching themselves and screaming, “Ouch! I’ve been kicked in the emojis!” But now, knowing what an emoji is, I began contemplating the wonderful, imaginative, creative world of them. My first thought was, “Where do people come up with those circular little suckers?” Then, fingers haphazardly punching my phone screen, I chanced to hit its emoji symbol, instinctively thumbed a quick scroll to the left and almost fainted.

Turns out my phone has emojis out its wazoo.

The more they kept sliding past by the hundreds, the more amazed I became. I had smiling emojis, kissing emojis, even see-no-evil monkey emojis! But that was just on the first scroll. Then came laughing emojis, frowning emojis, goofball emojis. I even had an emoji so buck-toothed it could, as my old friend Mary Hardin used to say, “eat corn through a picket fence.” There was a sweating emoji, too, and a freezing emoji, and a ticked off emoji saying something like “@!^&*%$<,” which I gathered was emoji-talk that I’d be fired for reprinting in English.

There was an emoji with fangs and an emoji who appeared to be seriously upset about his long proboscis. There was a dead emoji with Xs on its eyes, apparently to add just the right sort of  lighthearted levity to your phone message when you were threatening to kill somebody. There was also  a pleasantly smiling emoji that appeared to be a steaming pile of … well, you know. While I suppose it could have been a steaming pile of pudding, I doubt it.

Whatever that emoji was supposed to say, it ain’t good.

And still there were more! There were a bunch of emojis that appeared to be hand signals. Among them was one emoji with a raised middle finger that was DEFINITELY a hand signal, and I don’t mean for “Hey, buddy, you’re number one!” There was a tooth emoji, a nose, an ear, an eye and a brain emoji. Oh yeah, and two lips emojis, plus a tube of lipstick emoji.

There were cop, fireman, astronaut and British-palace-guard-wearing-a-big-fuzzy-hat emojis, to name just a few interesting occupations.

There were animal emojis, from cats and rats to dinosaurs, assorted weather emojis, fruit, vegetable and even bagel emojis, taco emojis and pierogi emojis. I tried to imagine under what circumstances I would ever send somebody a pierogi emoji, but couldn’t. There were emojis for balls (the kind you play assorted sports with). There were clock emojis, heart emojis, menorah emojis, ATM emojis, bikini emojis and an emoji that either represented being violently ill, or else celebrated walking around with a bunch of asparagus spears shooting from your mouth.

There were so many emojis, I was beginning to get very tired of looking at emojis, and began worrying that I would dream about emojis that night in my sleep. This was a fear which, technically, I could have addressed with an emoji, because my phone also had two bed emojis, occupied and otherwise.

Last but certainly not least, there were national flag emojis for every country in the world, including many I’ve never heard about.

Anyway, the more emojis I scrolled past, the more intimidated I became. But then I realized that emojis are nothing more than tiny modern-day hieroglyphics. They represent sort of a congratulatory nod to the ancient Egyptians, who came up with such symbols to convey some very useful messages inscribed inside the pyramids. You know, like “The sun god rocks!” and “Take care of your camels and your camels will take care of you” and “For a good time, call Cleopatra at …”

Nowadays? Sending someone a heart emoji still says it all, an unmistakable message.

As for opposite meanings, I suppose sending somebody the aforementioned poop emoji, despite the fact it’s actually smiling, delivers an unmistakable message, too, especially when paired with that raised  middle-finger emoji.

For me, though, I’m mostly going to stick with these other handy symbols we’ve developed over the years.