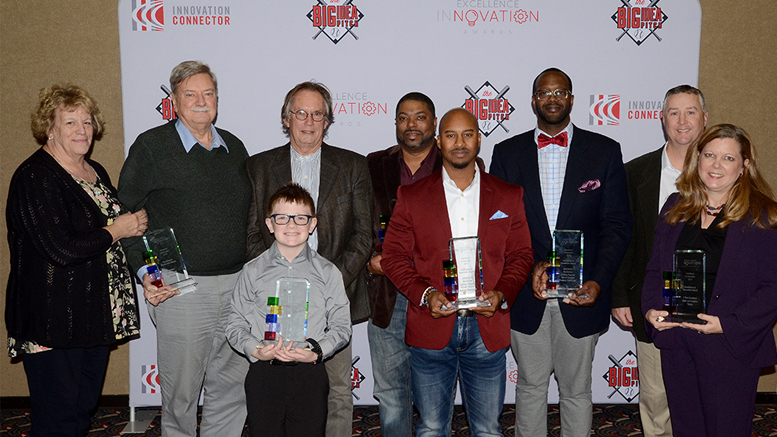 Muncie, IN—The Innovation Connector’s 5th Annual Excellence in Innovation Awards were held on November 13, 2019 at a celebration event at the Horizon Convention Center in downtown Muncie.

The evening’s events lead up to the introduction of the 5 finalists from the Innovation Connector’s Big Idea Pitch Competition. Each of the 5 finalists pitched live, in front of over 350 people in the audience. Ms. Kirsten Smith, Associate Director at the Center for Information & Communication Sciences at Ball State University served as the Master of Ceremonies. In addition, Scott Wise, Entrepreneur and Owner of Roots Burger Bar, was the keynote speaker for the evening.

Wise, former owner of the Scotty’s Brewhouse chain of restaurants, gave an inspiring, often emotional accounting of lessons he learned as a serial entrepreneur. Wise is a Ball State graduate who returned to Muncie after spending time in Texas where he came up with the idea for Scotty’s Brewhouse. “My parents said, ‘Prove it to us. Put together a business plan and show us how you can make the idea work,'” Wise said. So he did—and purchased the original Mugly’s that became the original Scotty’s Brewhouse.

You can listen to the audio of Scott’s keynote as well as the entire awards program below. (Think of it as an extended length podcast.) Recording by WLBC 104.1 FM

While in school during his 4th grade year, Caleb recognized an opportunity to improve parent car pickup at the end of the school day.  This process had students as “runners” who physically ran a list of names from the outside car line to a student waiting area inside the building. Caleb spent several months writing an Android app that would simply and efficiently communicate the same information with handheld devices.  After presenting his app to the school board in May, it was adopted and is being beta tested at Royerton this school year.

Caleb is also a member of Royerton’s Robotics Team and was a member of a team that qualified for the 2019 VEX World Championship. This involved creating, driving, and programming a robot to solve various challenges. He is a member of Cardinal Swim Club, the Youth Sports Performance program at Muncie Crossfit, and Cub Scouts.  He is an avid reader and enjoys playing Fortnite in his spare time. 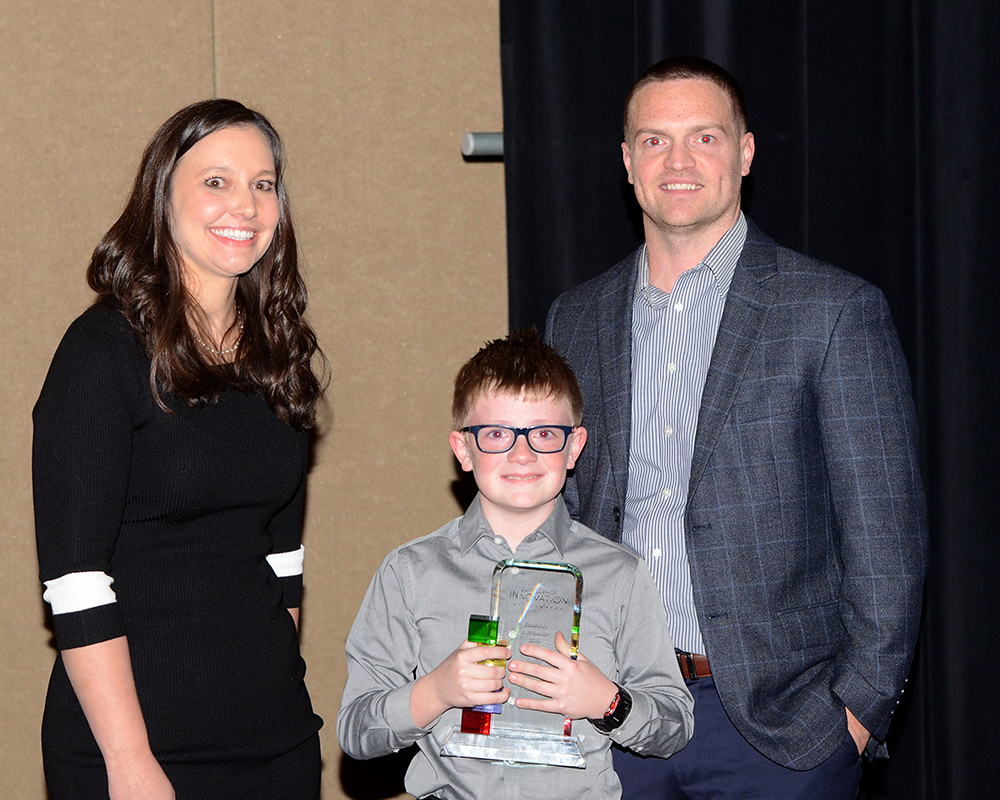 Mentorship comes in many different forms influencing many different people and organizations.  Rick and Lani Wallace are retired from their careers and could be doing the things that retired people are supposed to do. Both Rick and Lani are avid Apple device users and noticed that many people their age and older either do not know how to utilize these devices if they have them or that they are completely afraid ever to try to use an Apple device.  For several years now, Rick and Lani have been mentoring senior citizens on how to use their devices.

Simple tasks such as taking a picture and posting it on Facebook and how to retrieve voicemail, to name a few are taught on nearly a weekly basis.  Also important for Rick and Lani is for their students to be able to identify what phone and internet scams are and how to combat them.  They mentor church groups as well as hosting their sessions at the Innovation Connector. Through these mentoring sessions, many people have been helped to connect with grandkids, their children, and old friends.  Their students also have a sense of being connected to the modern tech environment, and they feel a sense of accomplishment in participating.  Some of their classes are held in the John Fisher Room at the Innovation Connector. Rick and Lani make their classes fun! Even with the door closed, it is common to hear laughter and cheering from the room. Rick and Lani are true examples of mentors making a difference in our community! 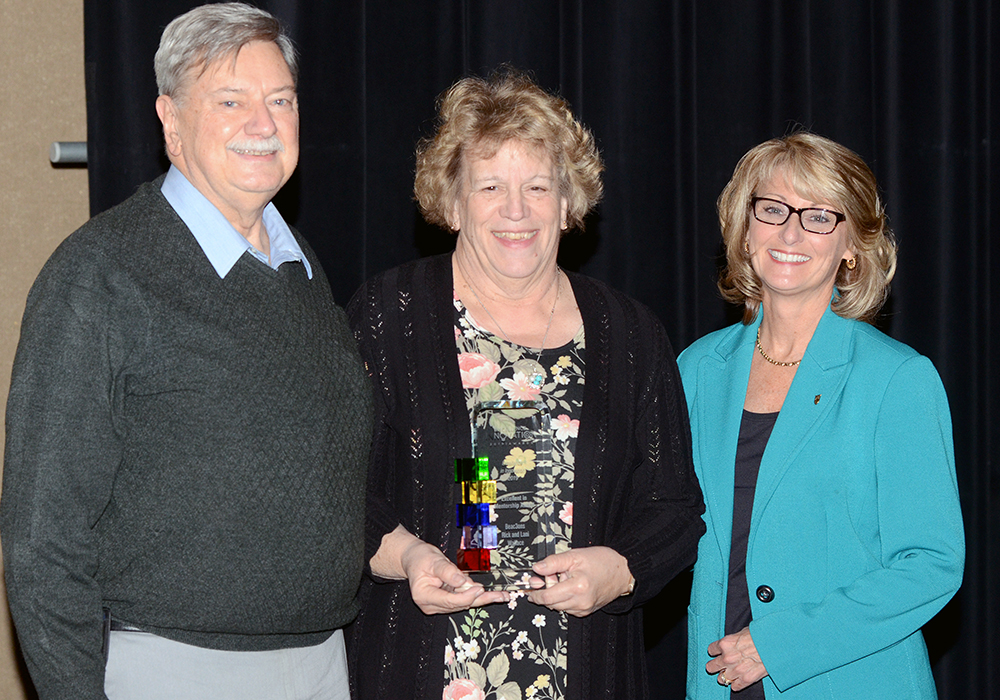 Lathay has continued the legacy of his grandfather in making his grandfather’s recipe of BBQ sauce. Breaking into this competitive market has not been easy.  Besides selling online, John Tom’s BBQ sauce is on the shelf in hundreds of stores in the Midwest.  It is the BBQ sauce of choice for Ball State University’s Food Service and Catering.  Lathay’s alma mater, Indiana University, recently added John Tom’s BBQ sauce to their menu as well. Innovation has happened in this business over the past ten plus years since its beginnings with owners Lathay, Terrell Cooper, and Rodney Robinson.

Starting with very small batches and limited production to meet customers’ needs, John Tom’s BBQ Sauce is produced in larger batches by outsourced companies who can meet their growing needs. There are also the logistic issues that occur during the growth of a business.  Lathay spent way too much time picking up large orders at the production location in Indianapolis and moving them to a warehouse facility across town.  From there, order quantities had to be split up for delivery or pickup from customers and distributors.

Lathay knew this logistics dance had to change. After receiving advice, he decided to move the warehousing and order processing to his home base – Muncie.  Today, Lathay rents an area in the Madjax Makers Space that serves his receiving and shipping needs.  Currently the sauce is sold in more than 100 retail locations as well as 65-70 food services. His business is more streamlined, and now he can spend more time focusing on growing the business and servicing customers.  As an entrepreneur, Lathay is an example of dedication and determination to bring a business to life.  As innovators, JohnTom’s Barbecue continues to be ready to pivot and adjust his business with market needs.  Lathay and team, thank you for keeping your grandfather’s recipe alive and available for all of us to share. 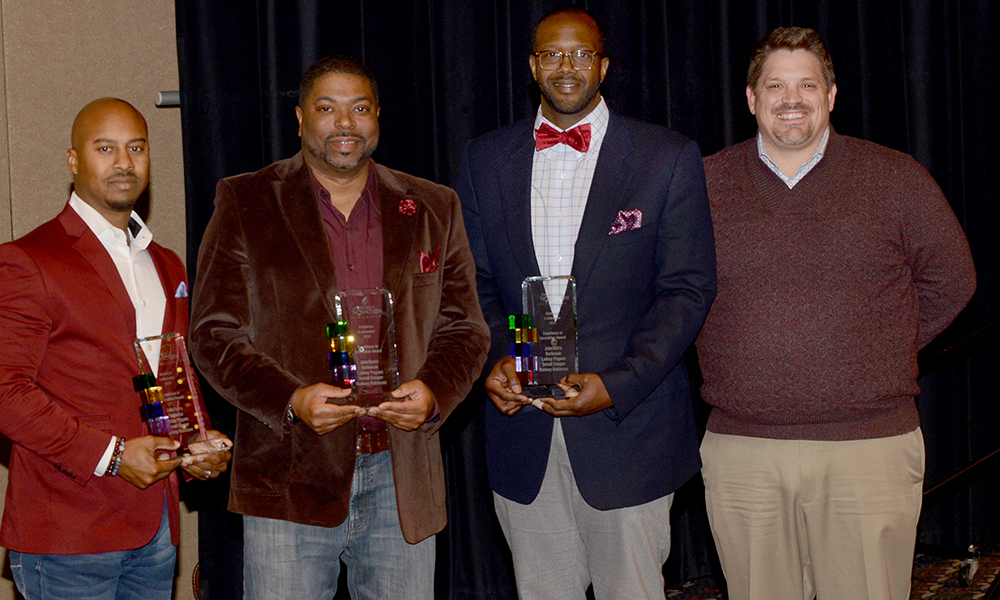 Mark’s professional career in sales, although a steady and secure job, was not fulfilling for him.  Wife, Heather, also enjoyed a challenging career in the technology marketing field. They had accumulated some startup capital as well as earned an excellent credit history. If Mark was going to make a career change, now was the time to do it. Mark loves baseball. Even after his playing days from youth through college ended, Mark’s passion for the sport never died down. Mark and Heather desired to create a place where baseball and softball athletes could develop their skills while fostering a sense of community.

With Mark’s baseball acumen and Heather’s marketing expertise, combined with the entrepreneurial spirit of both, 5 Tool Academy was founded in Yorktown, IN. 5 Tool is making a difference in the region. Several 5 Tool athletes have earned the opportunity to play at the collegiate level and two members were even drafted by Major League Baseball in 2019. Athletes are achieving their dreams of making the team, hitting the home run and making the play while developing even more important life skills. Additionally, nearly 20 highly qualified instructors work with athletes every week sharing not only their knowledge but also their passion for the game while also fulfilling the critical role of mentor in the lives of students. 5 Tool also provides an indoor training facility for approximately 30 teams and through partnerships in the community, 5 Tool manages multiple baseball and softball tournaments that continue to rapidly grow.

Mark and Heather also are community champions for special needs athletes through Challenge League. The league offers special needs athletes the opportunity to experience the thrill of playing baseball on a team of their peers. Each player has a “buddy” assisting the child as needed, enabling area baseball and softball players the opportunity to interact with a special needs athlete. For anyone with a family member or a friend with special needs that has played in the league, it is truly inspirational (and fun) to watch. It is one thing to have a passion for a certain interest in your life. It takes an entrepreneurial spirit and a lot of hard work to make the passion a business. Mark and Heather are doing just that! 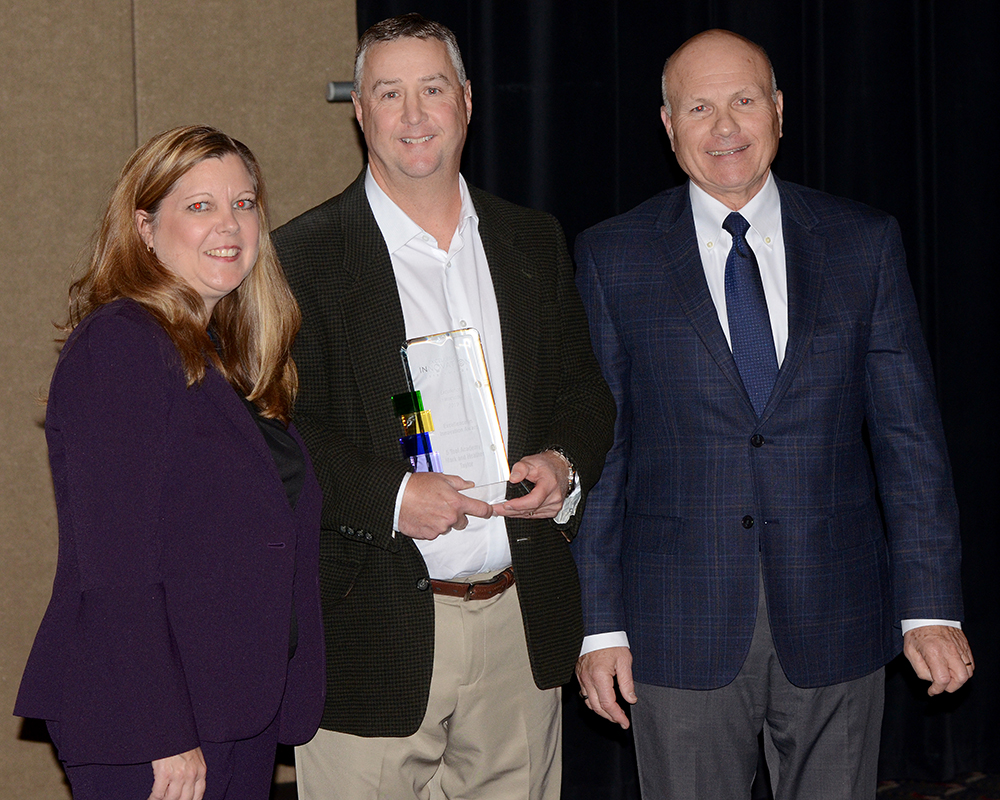 On top of that, additional abandoned homes and homes in need of drastic repair in this neighborhood are being transformed into functional and livable homes once again. The design and ambiance of Elm Street Brewing Co. are unique and impressive. But Elm Street Brewing Co. is more than just a building – it is a catalyst of change to revitalize a neighborhood that needed a lift.  And it serves as an example of change that is possible for all of Muncie and other neighborhoods in our community.  True innovation in business often looks like this – making a difference in the community and place where you are.

Both Bill and Eric are visionaries who not only wanted to start and grow a business; they wanted to impact an entire community.  As posted on their website, this phrase captures the heart and soul of Elm Street Brewing Co: “We pour our heart and soul in every beer we produce and invite you to enjoy a taste and experience that relives the spirit that built this town.”  Elm Street Brewing Co. is a shining example of the difference one business can make. 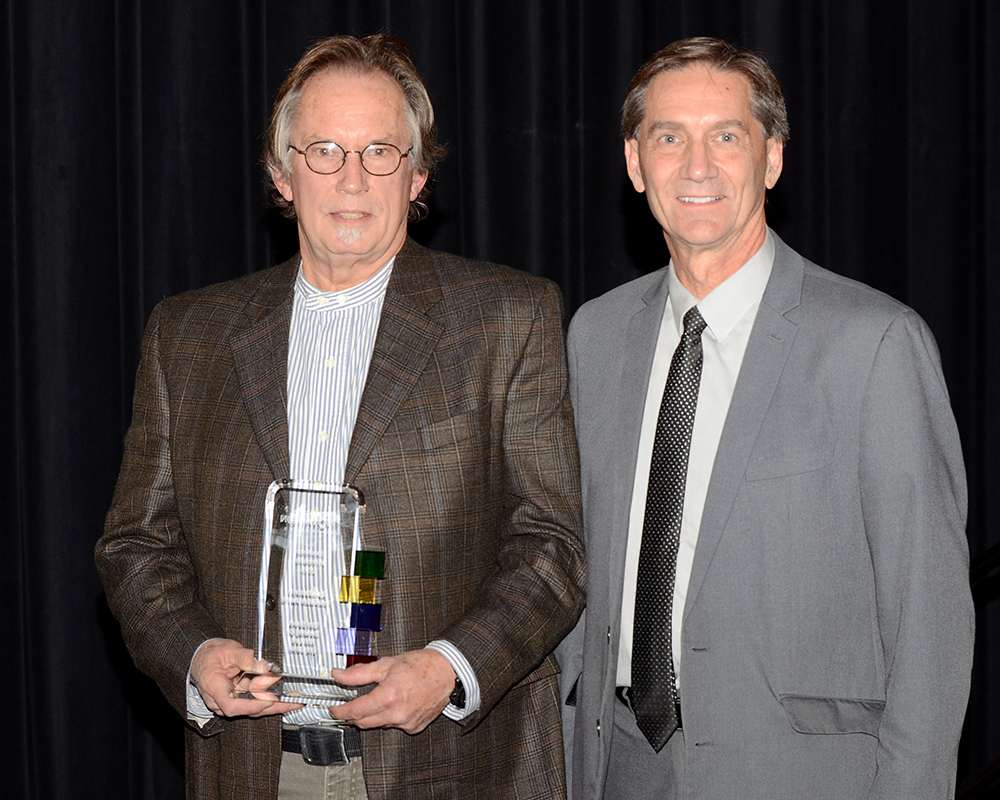 Sometimes, the best innovation is to be in business long enough and be successful enough for societal changes to positively impact the business a second, third and sometimes a fourth time.  American Lawn Mower has been in business since 1895 – that’s 124 years!

Before the rotary lawnmower, this blade turning push mower was what everyone used to cut grass at homes, golf courses, parks – everywhere.  They were featured in the Sears and Roebuck’s famous catalog and many department stores around the USA.  When the rotary lawn mowers were invented and start selling throughout the world, sales for the American Lawn Mower’s product took a significant tumble.  Many businesses that produced similar styles of lawnmowers went out of business and closed down.

But because of an acquisition and continued innovation, American Lawn Mower has been able to survive.  Now enter the environment awareness age as well as smaller lawns on both coasts, their products are once again in high demand, and American Lawn Mower is there to meet the need. A significant part of the innovation has taken place in the area of marketing and branding.  Since the internet has provided an opportunity for a global market, understanding their customers and how to reach them has been a primary focus. Because of this, American Lawn Mower Company continues to serve its customers with its legacy product as well as additional products.  Father and son, Robert and Michael, strive every day to continue this legacy as well as innovate for future changes and opportunities. 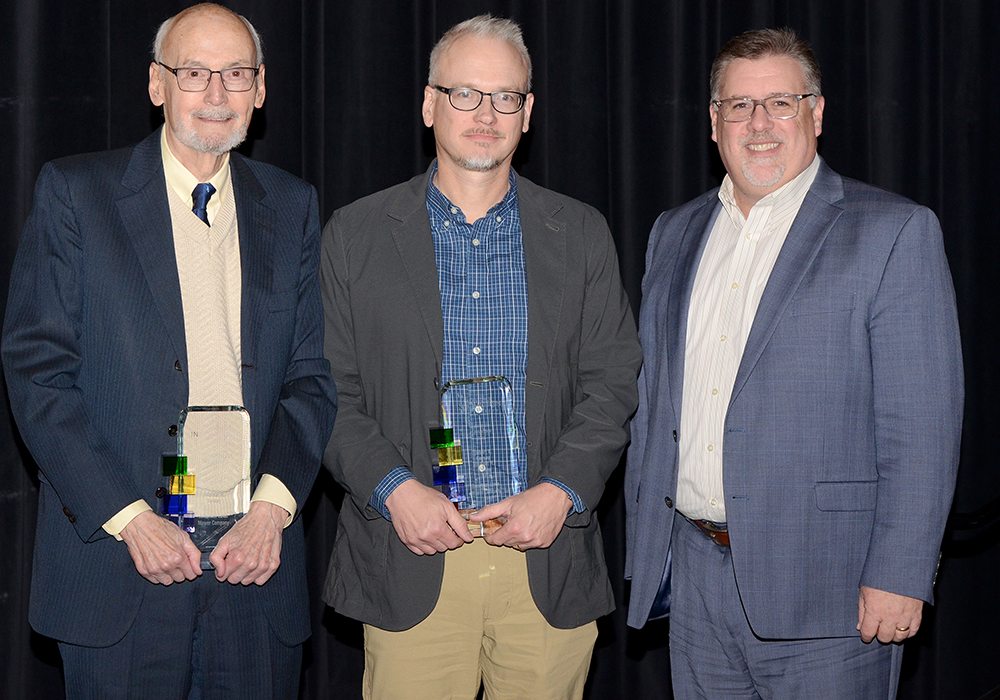 In the spirit of innovation, the five finalists of the 2019 BIG Idea Pitch competition delivered their business ideas in live, three-minute pitches to all in attendance. This year, the audience participated by voting for the winner, and the finalists were awarded first through fifth places later in the evening. These finalists emerged from nearly fifty original ideas during the BIG Idea Pitch training camps and semi-finals. Winners walked away with prize packages totaling nearly $30,000 in cash and services. 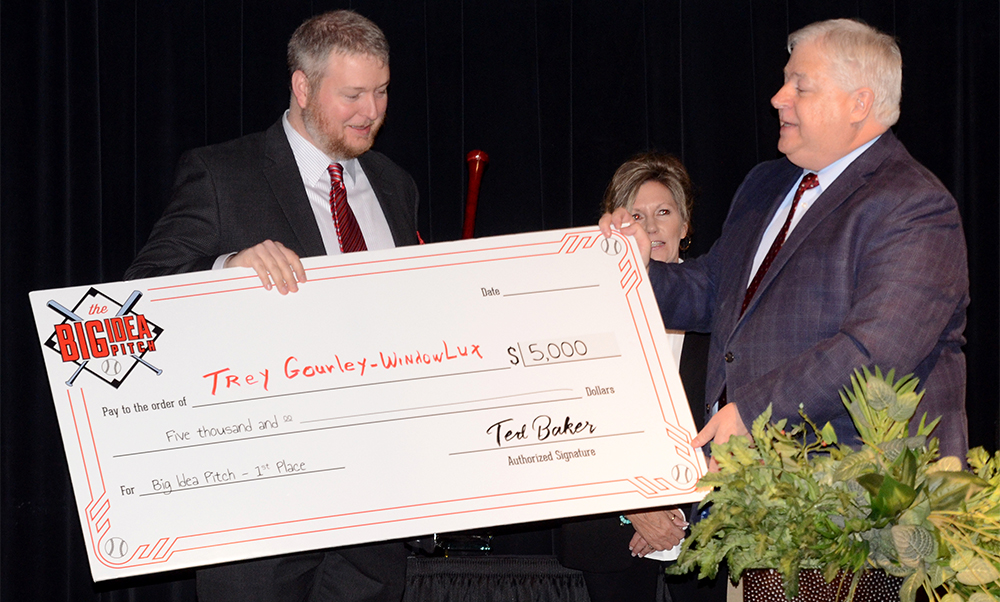 “Our region has a strong base of entrepreneurial and innovative leadership, and it was certainly on display at the Excellence in Innovation Awards. It was energizing to bring together innovators, both young and old, to celebrate the power of the entrepreneurial spirit,” stated Innovation Connector Executive Director, Ted Baker.

“At the Innovation Connector, we want entrepreneurs to get connected to resources and services offered in the community, which is why we create events like this for local entrepreneurs to connect, develop, and grow their business ideas right here in East Central Indiana.”

For more information on the Innovation Connector, contact Alexis Dishman, akdishman@innovationconnector.com or call 765.285.4900.