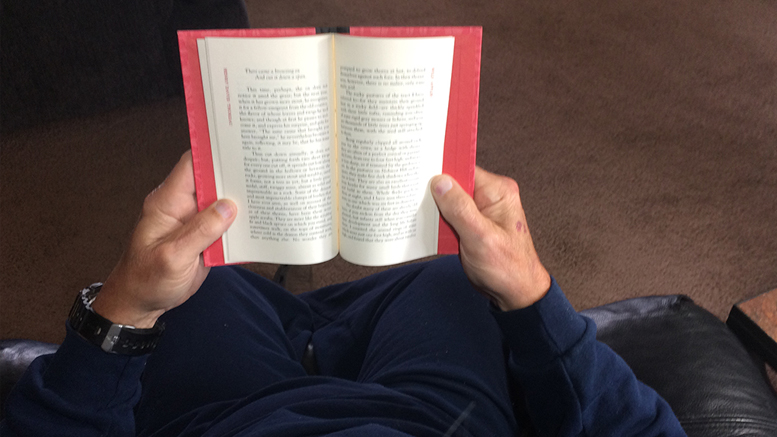 The more reading I do on computers, the more I appreciate books.

Not that, under certain certain circumstances, I don’t appreciate some electronic gizmos as well, you understand. Nancy and I both carry around Kindles. Mine is stuffed with so many e-books, if they had actual pages and covers I’d have to wear a truss.

For example, in book form, writer Ron Chernow’s hardcover, best-selling biography of Union general and former president Ulysses S. Grant weighs in at 1074 pages, counting its index. I’ve tried reading it before, but my arms got tired. In Kindle form, however, I can read “Grant” with just one hand, leaving my other hand free to shove pork rinds into my mouth like it’s a wood chipper.

There’s a simple explanation for this.

In trying to get a book to operate, I have never encountered anything remotely resembling a technical glitch. It’s like, with the mere flick of a finger the cover always flops right over, easy as pie. True, my bookmark may have disappeared, and once a book is open I may not necessarily like the words written on the pages before me. They may even be written in a language I don’t understand. But they are always right there.

On the other hand, I have tried to operate computers before and been thwarted from the git-go. This happens no matter how many buttons I punch, how angrily I punch those buttons or how, in a desperate bid to make it work, I loudly question the legitimacy of its parentage, as if the stupid thing has ears and feelings.

“You miserable, ugly, son-of-a-lady-of-questionable-character!” is generally my introductory remark to a recalcitrant computer. It’s almost as if I think dissing a computer’s mother is going to make one suddenly spring to life, anxious to accede to my every whim. Then if further persuasion is called for, I may follow up with, “I’m about three seconds away from kicking your big-beta-butt, you half-baked, bumbling byte of rebooted bandwidth!”

This never works, either.

Computers are supposed to be so all-fired intelligent, aren’t they? But I have a sneaking suspicion they are intentionally manufactured with hifalutin software programs. These programs convince them they are smarter than people and, therefore, entitled to hand us a load of crap whenever they feel so inclined. Anyway, after two or three endless minutes of moaning, punching and cussing, I will finally get Nancy’s attention.

“What’s wrong now?” she will inquire, drolly, from the living room.

“I’m ready to throw this blasted thing through the window!!!” I will holler from my man cave.

Then I immediately regret it.

That’s because Nancy is one of those disgustingly calm people who thinks there is a rational, reasonable explanation for everything. Therefore, when a computer fails to work, yelling at it is just plain stupid. The application of logic! That’s the way to go, she maintains. Far from joining me in castigating the computer for its obstinacy, she glides into the room with the calming, spiritual presence of Mahatma Gandhi and says, “You know, anger never accomplishes anything.”

This invariably pisses me off.

But then she’ll sit down at the computer and twenty seconds later it will be cuddling her like some lovelorn cat. Then I’ll schlepp off to the kitchen for beer, a handful of compensatory Oreos and a couple quick cuss words.

So yeah, she will smugly figure I’ve learned my lesson once again. But even when it’s up and running fine, I’d say a computer still lacks a lot compared to books.

There are the obvious reasons, of course. You’ve never seen anybody pull a favorite crumpled paperback from a back pocket, sit down for a relaxing read, then holler, “Dang! I forgot to charge this sucker!”

Also, books generally don’t break if you drop them, or even if you throw them at people you don’t like.

But operate a computer while eating a doughnut covered with lots of sprinkles, and you are going to wind up with a keyboard full of sprinkles stuck in its cracks. So you’ll try shaking them out, but the harder you shake the more ticked off you’ll get, until you’re whipping it over your head like an attacking bobcat before losing your grip.

Then it will smack you in the forehead.

Well, get the kind without sprinkles.