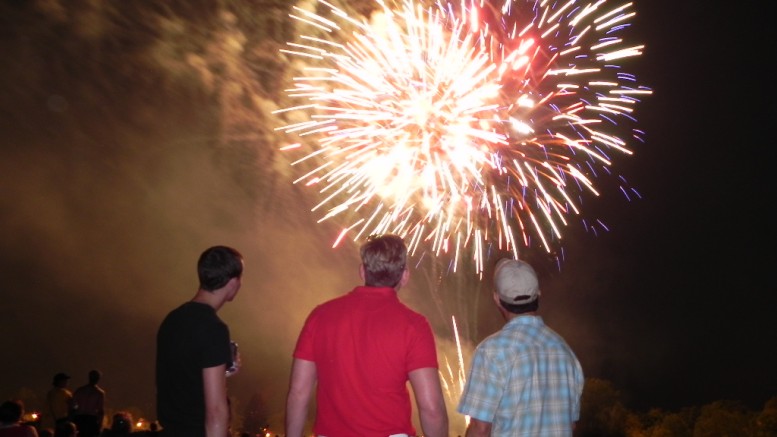 "Set the Night to Music" July 4th Fireworks Display at the Levee behind Muncie Central HS. Photo by: Mike Rhodes

By: City of Muncie Communications—

Muncie, Indiana will celebrate the City and America’s Independence Day with two spectacular fireworks performances by the world-renowned Fireworks by Grucci. The first show will be synchronized to music, aired by 104.1 HD1 WLBC and 104.9 WERK FM and will take place on the grounds of Muncie Central High School at 10pm on Saturday, July 4th. The second show will be displayed at Prairie Creek Reservoir on Sunday, July 5th, at dark.

“The show on July 4th will be another exciting family friendly event.” said Mayor Dan Ridenour. “We are happy to help mark America’s birthday in a single, unforgettable performance. The Gruccis are planning a spectacle featuring specialty pyrotechnical patterns including ‘USA’ Alpha-Grucci shells, Happy Faces, and other effects in a wide array of colors.”

The City of Muncie will be adhering to Indiana Governor Eric Holcomb’s Stage Five Back On Track plan for both shows. Face coverings are recommended, and social distancing is encouraged. On July 4th for those of you who would like to remain in your vehicle, 104.1 HD1 WLBC and 104.9 WERK FM, will be airing the synchronized show music. If you opt to be outside of your vehicle, please practice social distancing stage five guidelines and turn the volume up on your radio. There will be a mix of patriotic favorites with todays family friendly music.

Stage five guidelines can be found at : https://backontrack.in.gov/files/BackOnTrack-IN_WhatsOpen-Closed-stage5.pdf.

Changes at Minnetrista on the 4th

Minnetrista has chosen to cancel the America’s Hometown Band concert this year. In addition, they will not be hosting food trucks and in line with their reopening plan, the main building exhibits will not be open for the public that evening. Minnetrista will not be offering any sort of transit of guests to and from the Fairgrounds parking lot as they have in years past.

Even though  programming has been cut for the evening in attempt to ensure public safety and limit large collective gathering, the grounds are by no means off-limits, and Minnetrista hopes to see the community gathering (at safe distances) to enjoy the fireworks. They will still offer premier parking in the main lot, and continue to have staff on site to manage traffic. Restrooms will be available in the main building and will be monitored, cleaned, and the amount of people allowed at a time will be mediated.

About Fireworks by Grucci: Holders of two Guinness World Records, Fireworks by Grucci is a sixth-generation, family-owned and operated company. Known as “America’s First Family of Fireworks,” the Gruccis have transformed the night skies to the delight of millions across the globe since 1850. They are world-renowned for their pyrotechnic artistry, scientific innovation, and old-fashioned values. The Grucci’s gained the title for the world’s “largest pyrotechnic image” at the Star Spangled Spectacular celebration in honor of the 200th Anniversary of America’s National Anthem. The 600 foot high by 900 foot wide American Pyrotechnic flag was illuminated over Fort McHenry, in Baltimore, Maryland. Fireworks by Grucci remains the top choice for extraordinary performances in and around the world including; Las Vegas, NV., seven consecutive U.S. Presidential Inaugurations; the Olympic Games in Beijing, Salt Lake City, Los Angeles and Lake Placid; commemorations such as the Centennial of the Statue of Liberty and star-studded extravaganzas including the grand opening of the Atlantis Dubai and the Palm Jumeirah Island in the United Arab Emirates. On New Year’s Eve 2013, a stunning performance displaying 479,651 fireworks made its debut above Dubai’s iconic skyline. The Gruccis achieved their “Largest Fireworks Display” title and smashed the Guinness Book of World Record’s preceding mark. Phil Grucci currently serves as President/CEO — Creative of Fireworks by Grucci, Inc. and Pyrotechnique by Grucci, Inc., the manufacturing entity of the Grucci group of companies.