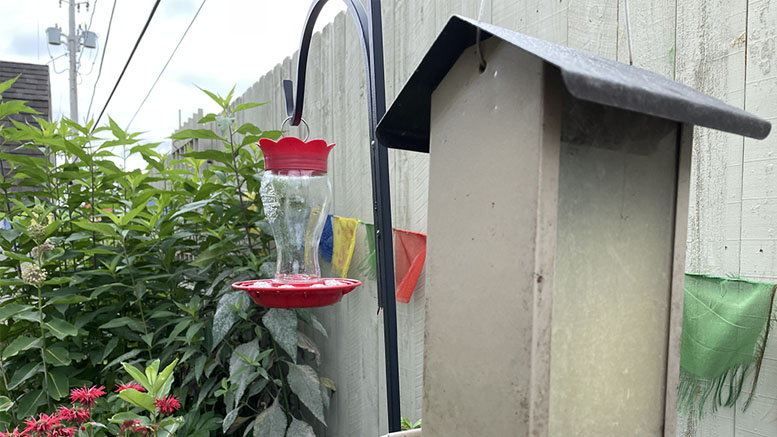 These empty feeders hint at what seems a tough time for birds. Photo by Nancy Carlson

If a guy were to equate the dudes he hangs out with to assorted bird species, many buddies of mine would be be falcons, hawks and eagles. You know what I mean? Nobody to mess with.

Still, I’m beginning to get a little up-in-arms about our bird situation this year, and so is my wife Nancy. Like, earlier this season folks around here were seeing Baltimore orioles, something of a rarity for these parts.

If I recall correctly, the key to attracting them was supposed to be oranges. So we stuck oranges to anything we could frickin’ think of out back. For a while we even considered filling attractive goblets with freshly squeezed orange juice – well, freshly stirred Tang anyway – yet never saw a blasted one of those orioles.

But that was OK, we reasoned. Who cared if a bunch of sophisticated big-city Baltimore orioles thought they were too good to hang with us Muncie hicks? Maybe they were still pissed that Indy stole the Colts. Besides, we comforted ourselves with the knowledge that our little buddies the hummingbirds would soon be returning from down South.

So how many of them have the Carlsons seen this summer?

Oh sure, he’s shown up on several occasions, but Nancy hadn’t kept four hummingbird feeders filled over the years with freshly made sugar water for THAT kind of lame response. Plus I know from Facebook others have seen way more.

Then there’s the word from the Indiana Audubon Society via the Indiana Department of Natural Resources about mysterious bird deaths in many Indiana counties. Is it avian influenza? The jury’s still out. But the stricken species include blue jays, American robins, common grackles, European starlings and Northern cardinals.

Of them all, it’s the thought of dead, crusty cardinals that bug Nancy and me most.

Along with Indigo and Rainbow Buntings, has there ever been a more beautiful bird than a male cardinal? As an airplane nut, to me their bright crimson coloring looks just like German World War One ace Baron Manfred von Richthofen painted his Fokker Dr. 1 Triplane. More than their dazzling color, though, we especially admire the habits of the cardinal couple that hung out full-time in the trees and shrubs of our back yard. It was like we all appreciated the same things about the unpretentious suburban life. Mind your own business. Don’t be jerks. Keep your yard mowed.

Anyway, we and these birds sort of understood each other, like we’re neighbors. If some weird bird malady clipped their wings, I wouldn’t be happy about it. But lately, they seem to have flown the proverbial coop. Of course, under state recommendation spurred by the bird deaths, we stopped feeding them, too, so at best it’s a Catch 22 situation.

There’s another thing this year that bothers us just about as much. The paucity of monarch butterflies. Last year we had enough that Nancy was a monarch mommy on full-time watch for their beautiful caterpillars. Finding them stuck to our milk weed leaves, she would quickly spirit them into our butterfly cage before some other critter could munch them like caterpillar-flavored nacho chips. Inside the cage, a minimum of care would see them through the cocooning and hatching process. Not long after that a gorgeous new monarch butterfly would erupt, telling Nancy, “Lemme outa here!”

Then she would set it free. It was a natural spectacle we enjoyed numerous times.

This summer, we’ve seen a handful of monarchs at our place, and no caterpillars. One of the monarchs flies endlessly past our rear deck, as if trying to convince us all is well, or maybe trying to convince itself that all is well.  Amidst all this comes word that the number of them in California has dropped precipitously.

Then, of course, there are the annual worries about bee populations plummeting, and its effect on pollination.

Anyway, I’ve been thinking about all this natural stuff lately, and its peculiar effects on things with wings, and the word that keeps coming to my mind is dystopian. Well, OK, it doesn’t keep coming to MY mind, because having four syllables and all, I keep forgetting the word. So then I yell at Nancy “What is it again????” And wherever she is, I’m pretty sure she rolls her eyes first, then hollers, “Dystopian!!!!”

Its definition? “Relating to or denoting an imagined state or society where there is great suffering or injustice.” In most cases, I’m sure that means for human beings, but I see no need to squabble over species.

So in this case is it a bad year for birds, butterflies and bees? Seems so. And if it is, are we members of the human race doing something to imperil them, because that would be messing with our world’s very future.

That’s assuming Mother Nature remembers how to make them anymore.