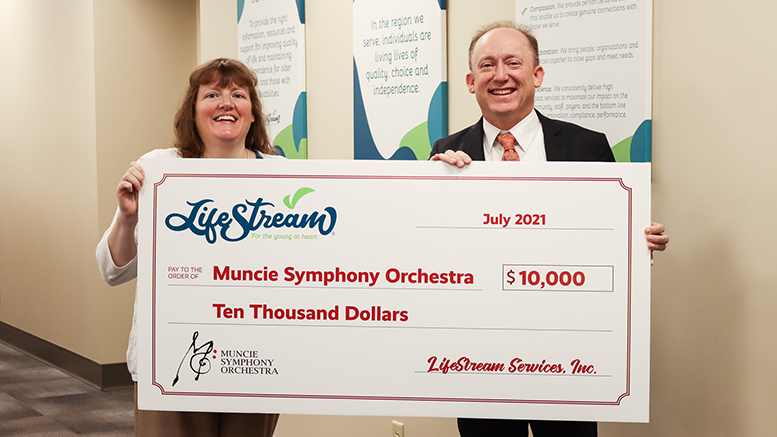 Muncie, IN — Following an extended “intermission” during the pandemic, Muncie Symphony Orchestra’s momentum continues to swell into the new season.

In May, the orchestra announced it had received more subscription revenue in the first three weeks of sales than it had in any of the past 10 full seasons, and in June, MSO rocked a full house at Canan Commons during a free Beatles tribute concert.

In addition to drawing in large crowds this year, MSO is also attracting an influx of sponsorships. Just last week, the orchestra accepted a $10,000 sponsorship check from LifeStream Services.

“We are incredibly grateful to have LifeStream’s support as we begin our new season,” said Scott Watkins, executive director of MSO. “We have already seen first-hand the excitement this community has for the return of live, in-person music, and sponsor support allows us to continue delivering powerful concerts.”

LifeStream was a presenting sponsor for the “Patriotic Pops” concert in downtown Yorktown on the 4th of July—another free community concert that drew a sizeable number of attendees. LifeStream will also be a concert sponsor for “Michael Cavanaugh: The Music of Billy Joel” in September, the first concert of the paid 2021–22 season.

Subscriptions to the MSO’s full season are available for purchase at munciesymphony.org. Pre-orders for single tickets are also now available on the orchestra’s website.

For more than 71 years, the Muncie Symphony Orchestra has worked to entertain, educate, and enrich the quality of life in the East Central Indiana community through meaningful, professional musical experiences. The MSO is made up of professional and community musicians, hailing from Ball State University, East Central Indiana, Indianapolis, Fort Wayne, and Cincinnati. To learn more, visit munciesymphony.org.