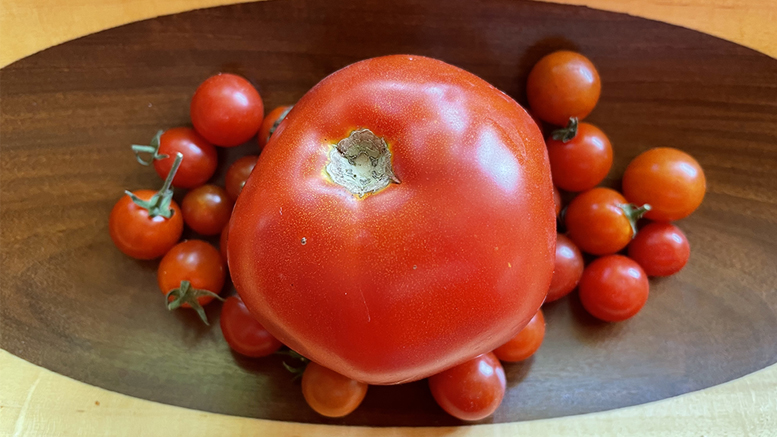 Our tiny tomatoes look minuscule compared to full-sized ones. Photo by Nancy Carlson.

Summer feels like it’s winding down, something we don’t need a calendar to figure out.

Our tomatoes tell the story.

Last year our tomato plants looked like refugees from the set of a science fiction movie. By that I mean the kind of science fiction movie where, far from leveling everything, an atomic blast inspires otherworldly growth in common living organisms. Our cherry tomato plants were a perfect example, lying thickly draped across several yards of ground like some emperor’s ruby-dotted robes.

This year? Not so much.

We’ve had plenty of little tomatoes, to be sure.  But while last year’s possessed the pleasing bulk of a jawbreaker, this year’s plants produced tomatoes the size of Milk Duds, and others were barely Raisinets.

If you know your candy, that’s not saying much.

True, these little suckers were a delight to pop into your mouth for a quick chew. But when our neighbor Brad Slater and friends John and Rosanna Scholl graced us with some of their full-grown crimson beauties, Nancy and I nearly fought each other to see who’d get the first BLT.

Pitiful? I suppose so. And now when Nancy brings in a new haul of our own, it’s barely half-a-handful of off-color miniature ‘maters.

The salvia are becoming off-color, too. Early on we thought they were doomed, the victims of having been planted before spring’s final freeze. Starting out strong, within a week or two they looked dead, or at least dying.

But then we followed my rule for dealing with emergencies, plant-based or otherwise. Sit back, grab some pork rinds and a beer, and let the gods – in this case, the garden gods – take care of it. Before long these salvia were granted new leases on life, and spent most of the summer ramrod straight, thick and flourishing!

That kinda makes the fact they are now succumbing to the passage of summer all the more painful to witness. I noticed this not long ago when their bright crimson blooms began to fade. How do I detail this without resorting to another stupid candy comparison?

OK, here goes. It was like when you’re at the grocery and buy yourself a beautiful stick of boldly colored hard salami, then start wolfing it down on the way back home. But once you’re two-thirds done, you’re like “Whoa! Salami overload!” and stick it in one of your fridge’s cooler drawers, then forget about it for a couple weeks. Then one day you stumble upon it while looking for, say, some string cheese to snack on, notice its once-bold salami coloring is starting to fade, and realize you’d better finish that thing off soon.

It’s like that. Our brilliant salvias are turning the color of middle-aged salami.

If we had an unquestionable success in the garden this year, though, it was the fake prairie sunflowers.

By that, I don’t mean they were fake prairie sunflowers. 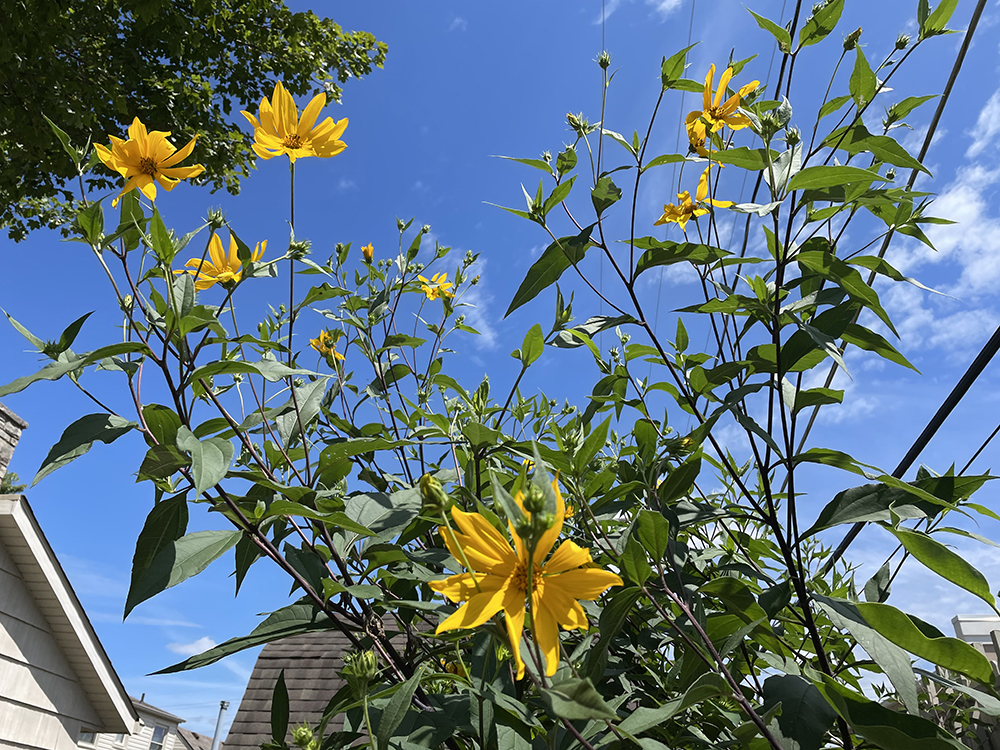 There’s nothing fake about the height of these sunflowers. Photo by Nancy Carlson.

Kind of ugly looking, sticklike, spindly plants for much of the summer, they eventually thickened into a solid wall about six feet across, profusely dotted with bright yellow blooms. Their height? They topped our backyard fence, which stands eight-feet-tall.

These were plants to inspire fantastic thoughts of other places and times, like the prairies of America’s Old West. Could these have grown in profusion for mile after endless mile out there? I bet, though they’d have been a bear to drive a Conestoga wagon through. And regarding bears, these would have been thick enough for bears to hide behind, too.

But observing this wall of sunflower plants from our back deck, I thought of how it could also serve as a magic passageway to another dimension. I mean, in his Narnia stories, C.S. Lewis’s portal to literary immortality was through what … a closet the children entered? What was to stop me from writing about children who charged face-first into the Old West through my fake prairie sunflowers?

Then it came to me: They’d break their noses running into my fence.

Somehow I knew “The Bloody Nosers” lacked the literary cachet Lewis managed to conjure in “The Chronicles of Narnia.”

No magic for me …

As we all know, when autumn approaches and dormancy eventually settles upon the land like a well sewn quilt, gardens lose their magic to the life cycles of most plants.

But then Nancy pointed to a back corner of our garden as if to say, “Not so fast, buster!” There in a strong, healthy clump of dark green leaves, the poinsettia she’s kept alive for years continued to sop up the nutrients necessary to survive another winter.

Was this its sixth year? Its seventh?

The plant came to her one Christmas long ago, and showed an extraordinary proclivity for living. So every spring since, Nancy has hauled it out to our garden, planted it, then dug it up and hauled it back into the house as another Christmas approaches.

“Is that it?” I asked skeptically about the poinsettia, and she assured me it was.

So, hey, summer may be be winding down, but our garden magic remains alive and well.

Meanwhile, I’m starting to think about writing a children’s classic, maybe a picture book called, “The Little Poinsettia That Could.”