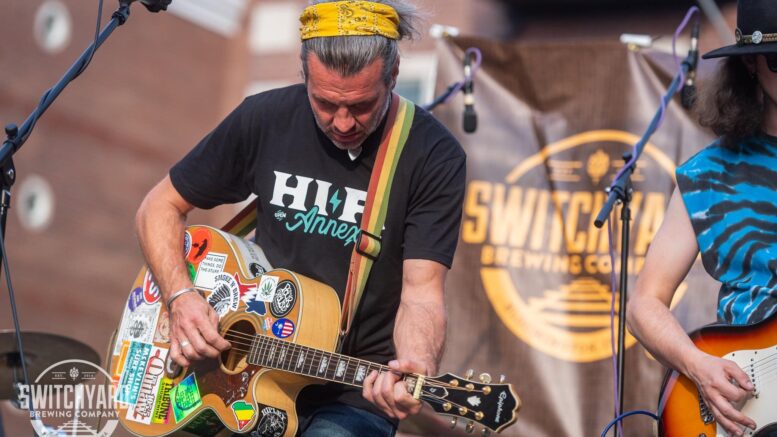 MUNCIE, Ind.—Muncie native and local artisan Mike Martin returns home with a new album of the same name. Martin has spent most of the last decade on the road with his band The Beautiful Mess, making time to come home in the off season to work on what he refers to as his “community punk rock grocery store” here in Muncie, The Common Market.

After being voted ‘Country Americana Band of The Year’ in Charleston, SC in 2018, and being nominated for Song of The Year, Album of The Year, Artist of The Year, and Video of The Year in 2019, Martin was ready to hit the highway for an extensive push of their brand of country music all over the country in 2020. Martin was scheduled to perform at a St. Paddy’s Day festival in Asheville, NC on Tuesday March 17th when they got the call that Covid 19 precautions were shutting down live music for the foreseeable future. This was on Monday March 16th. “I was looking at the reality ahead of us all, and thought man I need to be home with my family right now”, Martin said, looking back on what led to today.

While home with his family, Martin and his family got the news that his mother had been diagnosed with Multiple Myeloma, a cancer of the blood.  “Being home at that moment with my mom, and being able to go to her weekly treatments with her was a huge blessing for us all. We’re a very tight knit family, and our matriarch was for the first time needing the support and not being the endless supply of it. We were faced with the reality that my mom is human; not Superwoman,” Martin said.

“All of the sudden the reality of who I was and where I come from, and the future of what that is wasn’t something I took for granted. Who was I? Who am I and where did I, and my parents, come from? Why do I even sing country music? These were all questions that I thought I knew the answers to,” Martin added.

Martin & his band went to work on a new concept album they simply called ‘Home’. “We started exploring what home really meant to us. We’d been gone so long, and had run so hard pushing for the music that home had become a place we had been, but was now in the rear view in a lot of ways,” Martin said, “Now with live music on hold around the world, and our family seemingly on hold as we awaited what was next with my mom, why we do this was something that I couldn’t get out of my mind. I knew the simple answer. I am who I am today because of my mom, and all of my family. This is why I sing country music, because I grew up in this little country town where my mom still lives. This is who I am.”

In a time that seemed that the whole world was beginning to question who they were, and where they came from, Martin and his band noticed a longing in the American psyche. A longing to get home, to be home. It was a time to be with what is truly important to you. The old saying ‘Home is where the heart is’ really resonated with Martin. The new album ‘Home’ is a meditation on that. It is a musical journey meant to take you back to that place that made us who we are. “Like Grandma’s house on Sundays,” Martin said.

In 38 minutes, The Beautiful Mess wants to take you back home; even for just a small moment in time. Their goal is to tell us all that the world is ok, we’re going to make it. Remember what made you who you are, and what those people stood for, that is the message of home. They will guide us to who we’re supposed to be. Music has always had the power to heal and unite, and that is the goal with ‘Home’; to unite us back to our true selves.

Martin enlisted local artist and recording engineer Stuart Cotton to record the new album right here at home in the Common Market. After the market would close, Martin and a handful of local musicians would gather in the back and record all of the tracks for the new record right here in Muncie. When the world began to open back up Martin took the newly recorded tracks to Folly Beach, SC to work with his longtime engineer Will Evans. There they overdubbed and mixed the new album when the chance of a lifetime came to Martin. One of his musical heroes, Graham Sharp of The Steep Canyon Rangers, comedian and musician Steve Martin’s band, was in town for a two night run at the College of Charleston. Martin had interviewed Graham for his radio show ‘The Outlaw Country Kitchen’, which airs on 105.5 FM in Asheville, and the two had talked about working together because of their love of country music. Graham Sharp is a Grammy Award winning bluegrass artist, and him having time to come record on the new record seemed like a huge ask. But, Martin asked anyway. What could it hurt? To Martin’s surprise Graham said, “Sure, can you pick me up tomorrow morning? I have a couple hours before the sound check today.”

With a 1928 Gibson banjo in hand, that actually belongs to the legendary Steve Martin (“No relation,” Mike Martin jokes), Graham Sharp showed up at Fairweather Studios in Folly Beach, SC to lend his musical talent and grace to Martin’s new record ‘Home’.

The release is supported by two album release shows, one in Martin’s hometown area of Muncie, IN at Elm Street Brewing Company on October 23rd, and one on October 30th at Burns Alley Tavern in Charleston, SC, just a few blocks from where the Grammy Award winning banjo player Graham Sharp was playing at College of Charleston. Graham will join the Beautiful Mess for a co-bill that night to support his new record ‘Truer Picture’, and he will also be a Beautiful Mess for the night on banjo.

“My goal with the new record is just to leave people with a little more hope and love in their heart,” Martin added, “I feel like this is the best thing we can do for people right now. Let them know they’re loved, and they’re not alone.”

Martin and his pals in The Beautiful Mess invite you to join them on a journey of the soul back home. You can find their new album at home.hearnow.com or catch them on the road again. “My mom is in recovery and still my biggest inspiration,” Martin said, “Please sit down and give the album a listen front to back, it’ll take you home even for just a moment. The idea came to me from listening to Willie Nelson’s ‘Red Headed Stranger’, credited as the first country concept album. When in doubt, I ask myself “What would Willie do?”. I believe Willie would say let’s get back on the road again,” Martin concluded, “That’s the only other place I truly feel at home.”