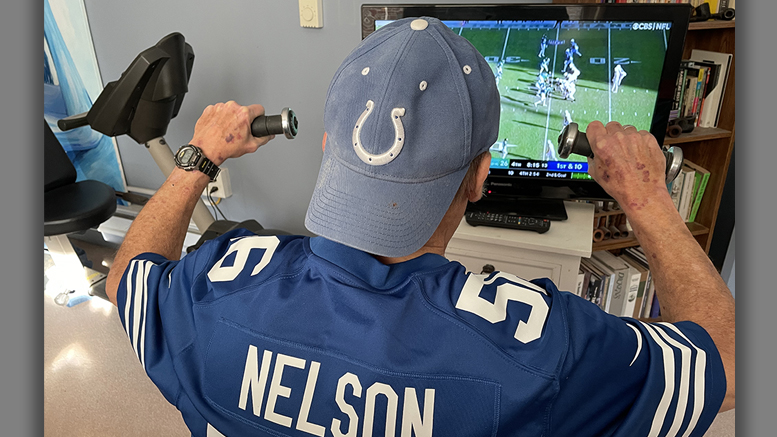 What’s in a name and number? A dynamic new me? Naaaah. Photo by Nancy Carlson.

Last Sunday’s overwhelmingly putrid Indianapolis Colts performance notwithstanding, I still kind of, sort of, in a manner of speaking, like them, but I’m not a guy who owns an inordinate amount of franchise swag.

I’ve got a Colts ball cap, blue with a white horseshoe on it. I bought a Colts sun hat a few years back, too, but graciously gave it to Nancy when I realized it made me look like a bigger dork than I already was. And I’ve got a cool Colts zip-up jacket which my daughter Katie gave me for Father’s Day.

Plus I own an ancient Peyton Manning jersey, number 18, which if I tried to pull it on now would fit me like a girdle, not that – please trust me on this – I’ve ever pulled on a girdle before. And I’ve got a number 13 jersey of T.Y. Hilton’s, which I love just like I love watching T.Y. snag impossible passes out of the sky.

Then for this Christmas, my son and daughter-in-law, Johnny and Stephanie, gave me a Quenton Nelson jersey, number 56.

Of my three jerseys, Manning’s and Hilton’s were acquired to pay homage to a couple of my favorite players. Wearing them was an effort to back My Boys in Blue, plus identify myself as a minor but legitimate part of the Colts Nation. Wearing them did not give me some absurd sense I actually was Manning or Hilton, though there was a day one came close. As I was walking through Indy’s airport wearing my Hilton jersey, somebody behind me hollered, “Hey, T.Y.!!!”

For just a moment or two, I felt Hilton-ish.

Turning around I shushed the guy, like I didn’t want him to alert any of my adoring fans to mob me right there in the airport concourse. After that, undoubtedly convinced I was some kind of imbecile, the guy played along with me, though I suspect I hadn’t fooled him. I mean, T.Y. had dreadlocks trailing way past his shoulders. My head had a big bald spot on the back. Also, T.Y. was lean enough he looked like he had never seen a Hostess Cupcake before. My flabby body looked like I ate a twelve-pack of Hostess Cupcakes for lunch every day. Then, of course, there was the fact that T.Y. is Black, and I’m not. You know, little clues like that.

By the time I got to my boarding gate, though, I realized that, like it or not, I remained me.

But you know what they say. Life is change.

I still wanted to identify as part of the Colts Nation. Then on Christmas morning I realized something incredible. After a lifetime of obscurity, parading around with my new Quenton Nelson jersey made me feel different somehow! It was like, despite the millions of brain cells that have turned to mush since entering my seventies, some mysterious little voice posed a question I would never have asked myself.

Was I Quenton Nelson?

After all, Quenton graduated from the University of Notre Dame. Once I drove past the University of Notre Dame. Quenton was a Unanimous All-American. I have been an American all my life. Quenton is an offensive guard. I was once a Brinks bank guard. Quenton is 25 years old. I had been 25 years old just 46 years earlier. Quenton stands six-feet-five. I stand five-feet-six, an astounding coincidence. Also, Quenton weighs 331 pounds. I weigh 173 pounds. Still, at 3,500 calories a pound, I could also weigh 331 pounds just by gaining 158 more pounds downing another 528,500 calories worth of Hostess Cupcakes.

Most telling of all, though, back at the 2018 NFL Combine, Quenton bench-pressed 225 pounds an eye-popping 35 times. As for me, whenever I encountered a bench, I sat down on it.

These parallels in our lives were uncanny!

My point is, lately as I walk around in my brand new number 56 football jersey, I’ve felt compelled to assume sort of a Quenton Nelson swagger. Never having had a swagger that didn’t involve Budweiser before, this sort of amazes me. But because of it, I keep my eyes peeled for guys changing flat tires who’ve gotten trapped under their cars when their jacks slipped.

Of course, if I ever spot one, that poor chump’s a goner. That’s because, unlike Quenton, no amount of thinking I am the huge Colts offensive lineman could empower me to lift a car off somebody, even if it were a go-kart.

There’s Quenton’s dedication to being the best at his job. While I don’t want to brag, I’ve noticed that since wearing my Nelson jersey, when I write I spend a lot more time picking out cooler adverbs and adjectives than I used to. Plus I check constantly to make sure that if I’m dangling anything, it isn’t a participle.

Then there’s standing up for oneself, like Quenton does on the gridiron every game. As a kid at the beach, I was always the wimpy one whose face the bullies kicked sand in. But now? OK, if it ever happens again, I might not totally dismember the bully like Quenton would.

However, I will scream, slap and kick like a girl.

The point is, I may not turn into another Quenton Nelson. In fact, knowing me, there might be a whole slew of low points in my life where, much as I’d love to, I don’t emulate my new favorite Colt’s example of domineering physical excellence

But, hey, at least I’ve got his jersey!

Now, if only next season we can get God to bless our Colts …