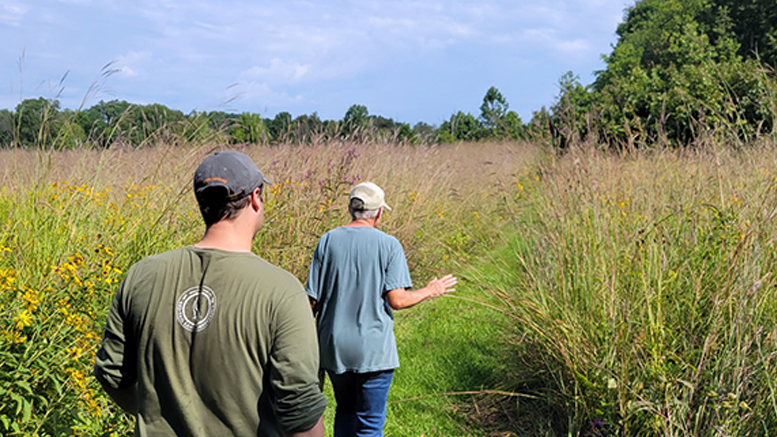 MUNCIE, Ind. – Building on two decades of experience and knowledge, Red-tail Land Conservancy has launched a plan that will guide their work to preserve land in east central Indiana for the next 10-15 years. This Strategic Conservation Plan prioritizes ecological biodiversity, natural area connectivity, water quality, carbon trapping, and public accessibility. Red-tail serves Delaware County and is headquartered in Muncie, IN.

“There is not unlimited money or time to protect the land that is most vulnerable to urban development, habitat loss, and effects of a changing climate,” said Julie Borgmann, Red-tail’s Executive Director. “Having a roadmap in place allows us to act swiftly in response to those rapidly increasing pressures.”

Red-tail’s Strategic Conservation Plan (SCP) was developed over two years based on scientific research and recommendations from area ecologists. Landowners and community members were also interviewed for comment.

Identifying the location and extent of land that would be most effective for reaching Red-tail’s conservation goals used a computer program called Geographic Information Systems (GIS).

SCP’s Priority Conservation Regions extend through Madison, Delaware, Randolph, Henry, and Wayne counties. They include rare wetlands, old growth forests, and all major regional rivers. Some regions border land is already protected, which can create extra space or corridors for wildlife to migrate.

Red-tail has already begun to integrate the SCP into their work. Goals they expect to achieve within a few years of launching the plan include: protecting rare habitats, supporting biodiversity, expanding habitat blocks, improving water quality, restoring forests and wetlands to mitigate climate change, and creating inclusive public access for enjoyment of nature.

“The rivers, woods, wetlands, and wildlife that make up east central Indiana are precious and irreplaceable,” said Borgmann. “National studies have shown that land trusts with strategic conservation plans protect more than twice the land of those without.”

The public is invited to explore the SCP with a highly interactive StoryMap on Red-tail’s website. Visitors can see which areas are Priority Conservation Regions, how GIS mapping works, and take a quiz to see if their land has elements of conservation priorities. The StoryMap can be found by visiting www.ForTheLand.org.

“By being laser focused in the land we protect, we can be sure the most critical habitats are preserved to match the pace of development. With the help of our conservation-minded supporters and partners, nature can be nearby and thriving in east central Indiana for generations to come.”

RED-TAIL LAND CONSERVANCY is a 501(c)3 non-profit organization that protects and connects habitats where wildlife and people thrive. By permanently preserving and restoring forests, prairies, and wetlands, Red-tail Land Conservancy plans for a future where the natural beauty of east central Indiana will exist for generations to come. www.ForTheLand.org