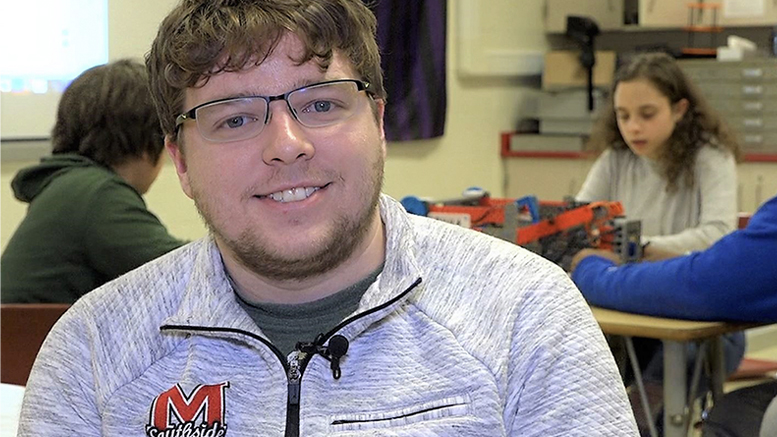 MUNCIE, Ind. – Imagine starting a Division I college basketball program from scratch. Now imagine making the NCAA tournament in that first year. And then again in the second. That’s essentially what Brian DeRome has done as the Robotics coach at Southside Middle School.

The second-year Industrial Technology teacher with a background in robotics started the school’s program last year, and now his teams are two-for-two in qualifying for the VEX Robotics World Championships. This year’s squad is headed to Dallas this weekend to compete.

“It is very rare to be able to make it back-to-back, let alone for a new program,” DeRome said. “This is a really exciting opportunity for these kids.”

The five students on the team – X’Zavier Sevion, Mollie Thorlton, Connor Cross, Bryan Grill and Brayden Whitaker – are all brand new to robotics. They were recruited by DeRome to give it a try, and now they’re all glad they did, even though they had a rough start to the season. 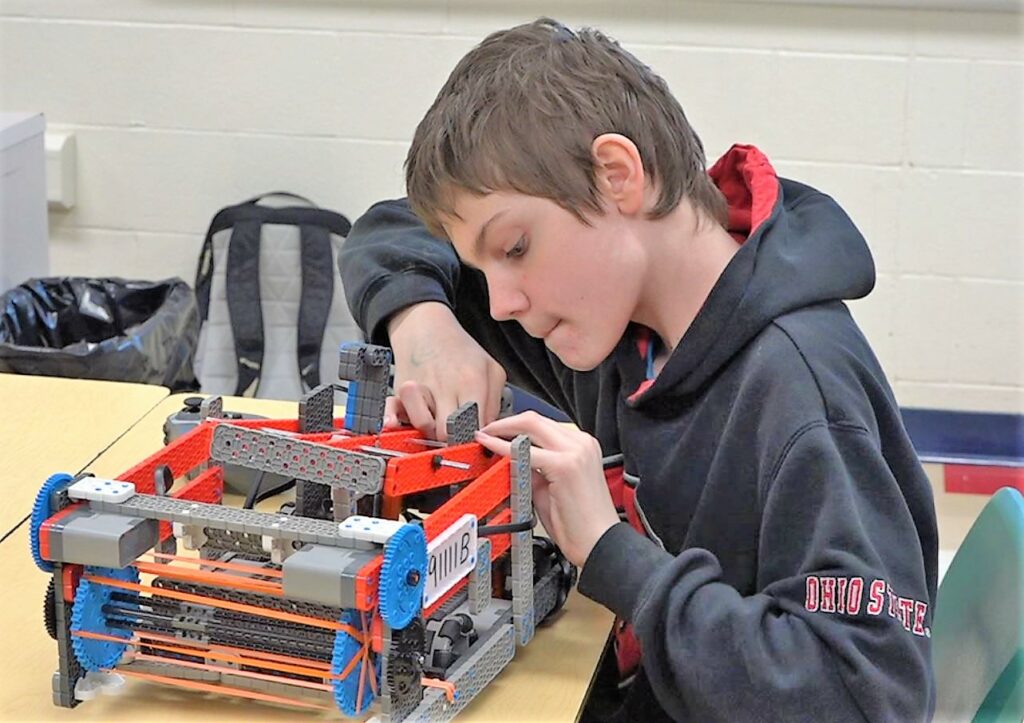 Brian Grill makes adjustments on a portion of a robotics unit. Photo provided

“The robot kept falling apart in the middle of the competition, so we’d have to hurry up and fix it,” Cross, a sixth grader, said. “It was kind of a struggle for us, but we got it together and were able to make it to worlds.”

Now they will be competing against the best teams in the world where about 900 teams have qualified in seven different divisions. The competition requires each team to build a robot that performs specific tasks in order to score points.

In Southside’s division, the object is to drive the robot around the ring in order to scoop up balls and shoot them into a goal. Points are awarded for each ball shot into the goal and also for using the robot’s back hook to hang from a bar on the course.

“I really like how challenging it is because it helps my brain focus a lot,” sixth grader Bryan Grill said.

Focus is what the team will need to equal or better the results that last year’s team had at the championships, which were held virtually. Southside made the finals in their division, ultimately finishing in seventh place. All the immediate success is starting to give the program a big reputation around the school.

“A lot of kids are starting to take notice and I think it will be easier to recruit moving forward,” DeRome said. “We’re building something here and I think we’ve got something special going.”

The upcoming trip to Dallas is already special for this year’s students, one of whom has never flown before. The George and Frances Ball Foundation made the team’s participation possible through a grant that will pay for the travel and accommodations.

Anyone who wants to watch the championships livestream can visit https://www.vexworlds.tv/#/?channel=vekofbxmpfcyjivcicwm.

Southside’s teams are listed as 91111A in the IQ MS Opportunity Division and 91111B in the IQ MS Math Division.

Serving the local community since 1855, Muncie Community Schools (MCS) educates more than 5,000 students at six elementary schools, two middle schools and one high school while also managing several other educational facilities. Through its unique partnership with Ball State University, MCS strives to maximize each student’s potential so he or she can be a positive, productive member of society. Find out more about MCS or Director of Public Education and CEO Lee Ann Kwiatkowski at muncieschools.org.