Members of Community Business Connections recently gathered for their meeting at The Acoustic Room. Photo by: Lorri Markum

Muncie, IN—Celebrating its first anniversary, Community Business Connections [CBC] has grown leaps and bounds since its inception. With more than thirty regular members, this group of local professionals has not only developed a successful networking group, but many true friendships as well. Three key founding members began discussing the need to grow their own business through a network of local professionals, thus, began the groundwork for CBC. One of its founders, Chase Winkle, Owner of Winkle Mowing Service LLC., said, “We wanted to create a group that could be somewhat structured, but also fluid so, it could transform into whatever the group members collectively wanted it to become.”CBC developed as a spin-off from a previous monthly mixer bringing local professionals together, casually to meet once a month during 2013 in the basement of Vera Mae’s Restaurant.

The mission of the current group has remained simple—Develop professional relationships with one another, to help build solid business endeavors. “I would say additional elements have been added to the mission over the past year. We [group] seem to have a passion for helping not-for-profits, and giving back to our community on a weekly basis, which is awesome,” said Winkle. Local not-for-profits the CBC has contributed to include Second Harvest Food Bank, and Hearts and Hands United. Additionally, CBC has an upcoming “field trip” as one of their meetings, to the YWCA and will be having a linen/hygiene product drive to collect necessities to help residents there. CBC is also planning to sponsor a charity during the holidays in November and December. CBC also conducts “meeting field trips”, by holding their meetings at various local businesses to show their support.

“We really focus on positive interactions, positive feedback, and support of one another. That’s what really makes this group cohesive, fun, and growing,” said Kyla Bartle, secretary for CBC. The group has seen a continual growth in membership throughout this year, on average two to three new memberships are welcomed each month. 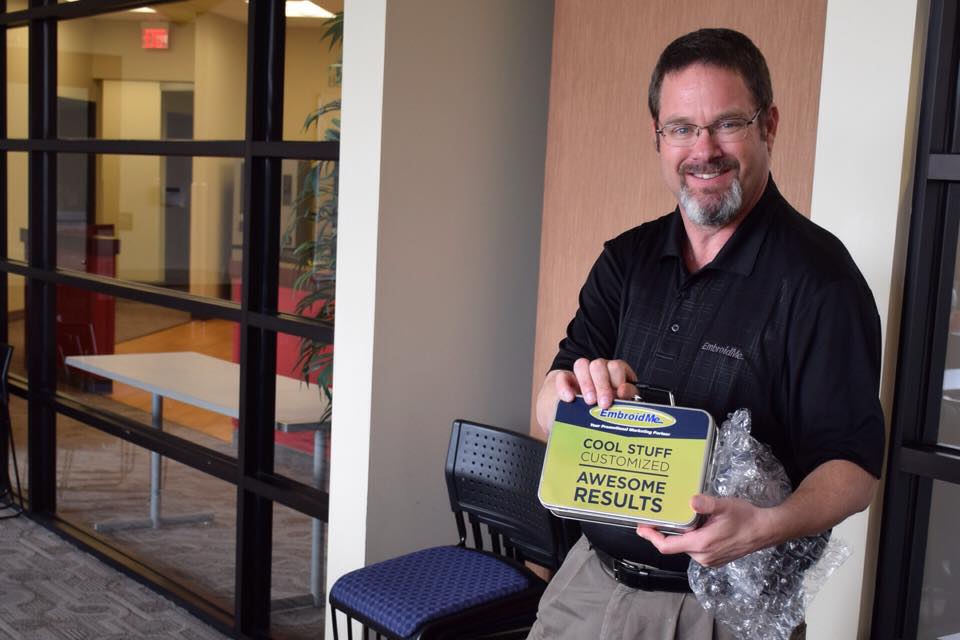 Jay Smalley shows off some of his “cool stuff” at a recent CBC meeting.

The members as a whole, drives the direction the group progresses in. At noon every Wednesday each week, more than 30 members and their guests gather together for regular meetings at Innovation Connector. Members discuss individual business needs, share and express gratitude for new professional leads and contacts, and join one another for lunch. There is an established structure to each CBC meeting. A casual call-to-order is addressed, then new group information is shared with members, a welcome is extended to non-member guests in attendance, and each current member provides a 60 second introduction and announces professional endeavors they are seeking. Typically, each meeting has an established presenter, or a sponsor, who provides a ten-minute presentation to the group.

Attending a meeting provides immediate insight the members of CBC are more than just local, professional, business owners, or representatives, they are also friends. This is not a stuffy, structured environment. These professionals are very comfortable around one another, and provide a warm atmosphere to any guest brought to the meeting by a current member. A no-compete guideline is followed to assure each professional line of business is stand alone, and not duplicated within the group. One-on-One gatherings are encouraged to allow members to get to know one another beyond the Wednesday meetings. Winkle said, “One-on-Ones allow members to know one another better, which in turn, allows each person continual confidence, and trust in referring one another to fulfill business needs we hear about outside our group.”

CBC keeps a record of referrals, and successful business conducted, but does not pressure members to fulfill any level of quotas. They keep it casual, which seems to work well as their numbers indicate very successful growth in their respective businesses.

Any local professional is encouraged and welcome to attend a CBC meeting. Meetings are every Wednesday at Noon at Innovation Connector, 1208 W. White River Blvd, in Muncie. Brown bag lunches are encouraged as most members bring theirs to the meetings. Anyone may be a guest, though due to single representation for each line of business, membership may not be able to be accepted if another current member is in the same line of business. Membership is simple, if you represent a business not currently represented by a member of CBC, then filling out a simple provided form, and returning it to a group member is all it takes. One requirement the group upholds is attendance. Members may not miss more than four meetings in a continual three-month period.

For more information on CBC, contact the Innovation Connector at 765.285.4900