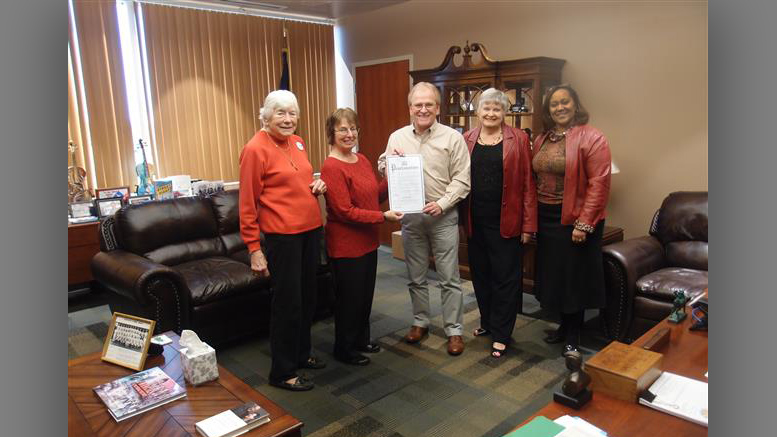 Mayor Dennis Tyler met with representatives from the Muncie Branch of the American Association of University Women (AAUW) to issue a proclamation designating April 12, 2016, as Equal Pay Day in the City of Muncie. By this action he encouraged Muncie’s citizens to recognize the full value of women’s skills and significant contributions to the labor force. The proclamation also encouraged businesses to conduct an internal pay evaluation to ensure that women are being paid fairly.

Tuesday, April 12th, symbolized the time in 2016 when wages paid to American women caught up to the wages paid to men from the previous year.   According to the U.S. Census Bureau, women working full time, year round in 2015 typically earned 79 percent of what men earned. In Indiana, AAUW statistical data shows that women earned 75 percent of men’s earnings.   A lifetime of lower pay means that women, especially minority women, have less income to save for retirement and less income counted in a Social Security or pension benefit formula.

As a national observance, Equal Pay Day calls attention to the Equal Pay Act of 1963 and calls upon Congress to now pass the Paycheck Fairness Act that would close loopholes and improve the law’s effectiveness. Fair and equal pay strengthens the security of families today and eases future retirement costs while enhancing the American economy.