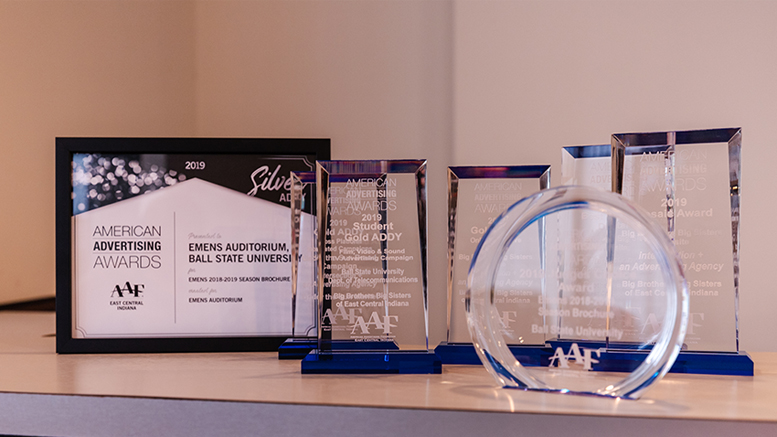 “The American Advertising Awards celebrates the creative talent in East Central Indiana,” said Allison Robbins, executive director of AAF ECI. “We were excited to showcase the advertising arts that happen in Muncie and the surrounding communities.”

This year’s submissions for the ADDYs were judged by three out-of-market advertising professionals in a blind judging process.

“The judging panel was impressed with the level of both student and professional work,” Robbins said. “AAF ECI is proud to host this local competition, as these entries are forwarded to the District 6 judging and hopefully onto the national stage in June at the AAF national conference.”

Every year, the judges also choose Best of Show awards, and each judge has the option to choose a piece to receive their Judge’s Choice award.

“Our philosophy of team, trust, and continued improvement continues to work in conjunction with our creative team ECP, our clients, and the great sales team that continues to grow and make business better,” Joe Cielinski, sales manager at Burkhart Advertising, said. “Put that in the great community of talent in our AAF district, and you have success. We are honored to serve among these forces.”

The Mosaic Award, which is given to a project that highlights diversity, was awarded to Intersection Advertising Agency in recognition of its work with the Big Brothers Big Sisters of East Central Indiana (BBBS ECI) website.

“We have been intentional to show full representation of the Bigs, Littles and future volunteers so that everyone feels a sense of inclusivity and is empowered to reach their full potential,” said Amanda Price, senior account manager at Intersection and board member for BBBS ECI. “Big Brothers Big Sisters of East Central, while the smallest in the national network, is doing remarkable work to impact our community.”

A complete list of the 2019 awards is available on the AAF ECI website. The ADDYs accept all creative pieces, including works in print, digital, radio, television, copywriting, design, event promotion and more. AAF membership is not required to submit. To learn more about how to enter in the 2020 ADDYs, visit aafeci.org.

AAF ECI is the premier resource for advertising, marketing and communications professionals in East Central Indiana. To view all of the award-winning creative works from the ADDY’s, visit https://www.aafeci.org/2019-addy-winners