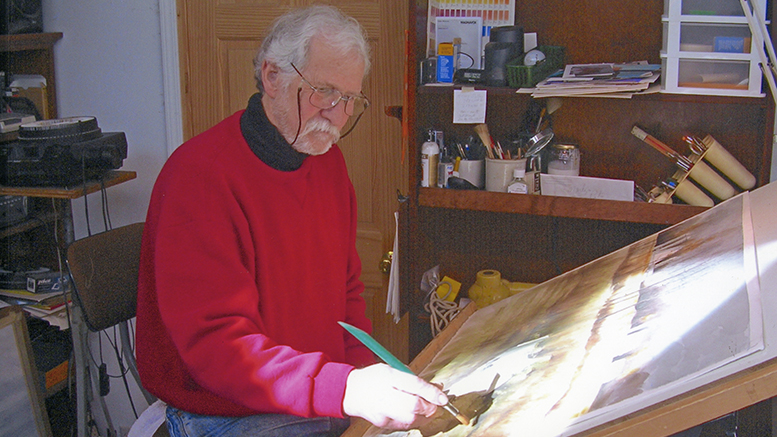 Muncie, IN—Jim Faulkner’s dedication, sensitivity, and skill as a painter for more than 50 years made him one of the most revered artists in our region and state. In a 2006 article, Jim said “I’ve always loved Indiana and it’s change of season, and I had missed it when I was gone . . . Indiana is as beautiful as any place in the world.”

Jim Faulkner passed away at 86 in January.  A public reception celebrating Jim Faulkner will be held Thursday, May 6th from 5-8 at Gordy Fine Art and Framing Company, 224 E. Main Street in downtown Muncie.

Born in Kentucky, Jim moved to Delaware County at the age of seven.  While attending Yorktown High School, Jim joined the U.S. Air Force, serving in Japan and Korea. While enlisted Jim studied at the Bryant School of Art in Virginia.  Following his discharge and completion of a GED, he received both undergraduate and master’s degrees in Fine Art at Ball State University. Faulkner taught at BSU for thirteen years following a two year stint at Boise State University. During this time, he taught, drawing, print making, and contemporary abstract art.

In the late 70s, Jim decided to become a fulltime artist. “I taught and practiced contemporary art for about 15 years. Around the end of my college teaching in 1977 I began a return to my background of realistic watercolor and sculpture.”  His ability to transition to a full time artist, he always credited to his wife of sixty-two years, Eleanor (Crawley) Faulkner.

They lived on Eleanor’s family farm, known as Falcroft, west of Muncie.  She was known to many as she trained dogs for 18 years and boarded dogs for 30 years. That experience was  charmed for many, they felt they were dropping their dog-kids off at camp, instead of the typical kennel situation.

Beautifully maintained, the farmhouse, kennels, and barn were all part of an idyllic country scene. Jim’s studio in the barn was the envy of other artists. He just seemed to do everything “right.” Painting scenes of Indiana was one of those right things. Jim set up in fields and alongside country roads to paint old barns, farmhouses, rolling fields, less-than-tidy barnyards. He painted them in a way that let you know he loved them – just the way they were. And then, you loved them too. 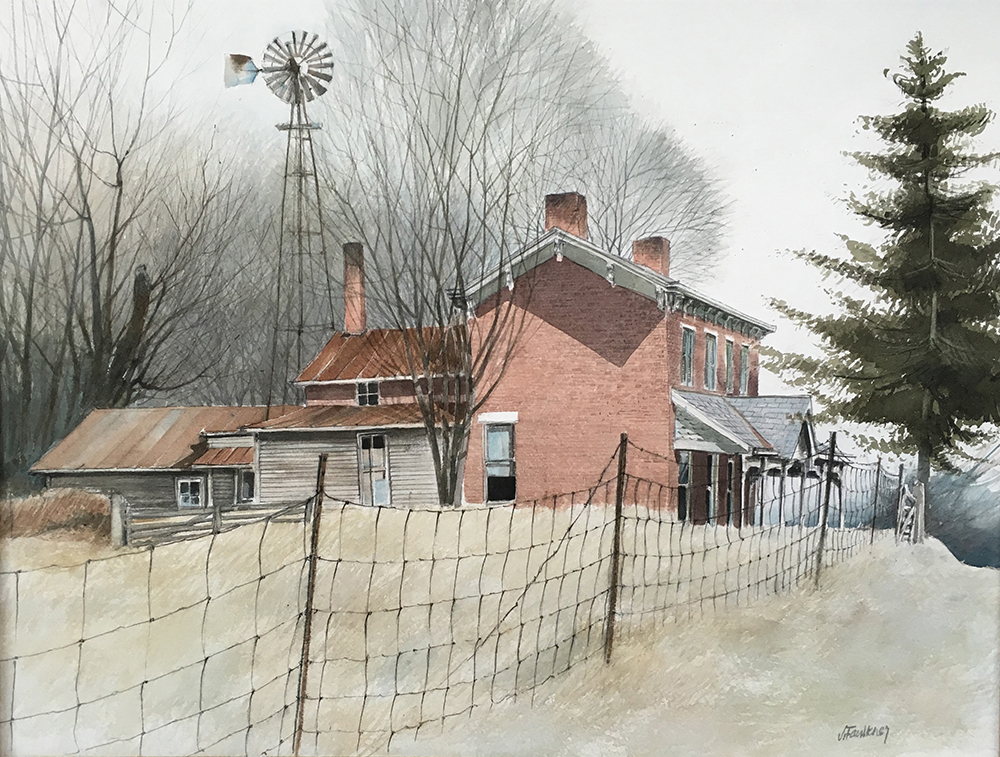 I am very taken by the constant change taking place in everything.  The new that decays, becoming the old. In the natural world, both new and old seem to hold my interest. I paint the meadows, woods, homesteads, towns, and people of the mid-west, trying to find meaning in the stillness of an abandoned farm, or the quiet of a snow-covered wood, or even the aging of the human face.

Many of his paintings are housed in offices throughout Muncie as he took on commissioned work much of which was through David Dale Design. These watercolors capture the history and story behind such Muncie mainstays as Muncie Power Products, Ontario Systems, Muncie Children’s Museum, and the Community Foundation of Muncie and Delaware County.

Jim also painted and documented the landscape beyond the farmland of our region.  He and his close friend and fellow artist, David Dale, chronicled their experiences over 15 years, 500-miles and in four seasons along the winding course of the Wabash River. In 2006 and 2007, this journey culminated into a major traveling exhibition, River Odyssey: Two Artists Follow the Wabash, featuring landscapes and river town scenes from each of the counties bordering the river.

He received numerous awards throughout his painting career and is one of the most collected and well-known artists of east central Indiana. His artistic excellence and contributions to Muncie’s cultural vitality were honored with a 2015 Mayor’s Arts Award where Faulkner was recognized with the award for Artist in the Community.

As Genny Gordy, Muncie arts educator and artist, stated best in a 2013 blog post, “I hope that others recognize how lucky we all are to have an artist like Jim Faulkner in our midst. He is an exceptional teacher, friend, and human. Soft spoken – generous with teaching, time and favors, Jim has demonstrated to those of us who adore him, that kindness, tenacity, talent, good humor, and a steady, consistent pace will lead to a Life Well-Lived. He is the one who keeps at it, never quits, encourages others always, is very kind to humans, dogs, and undoubtedly, other beings, and has given us all a life to aspire.”