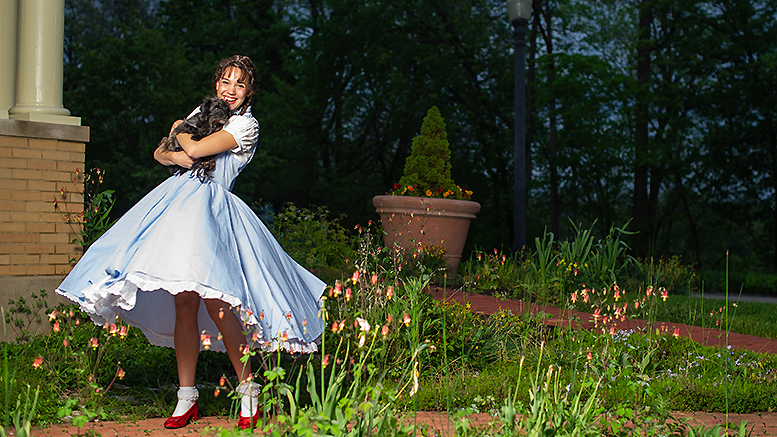 Muncie, IN—Follow the Yellow Brick Road – or Walnut Street – to Muncie Civic Theatre’s production of The Wizard of Oz June 17-20 at Canan Commons in downtown Muncie.

The family fun – which will include food trucks, a hot air balloon and a book giveaway – will begin each evening at 7.pm

This is a “Wizard of Oz” production like none other, according to director Bridget Duggleby.

“I like the challenge of taking a well-known story and finding ways to surprise the audience,” she said before letting us in on just a few of her plans. “The audience will be equipped with various tools to help them become part of the show by holding up elements for our scenery, getting up close and personal with the witch – unless you used lots of witch repellent – and even participating in an audience sing along.”

Civic veteran Amy Leffingwell is the witch. The Wicked Witch of the West, to be specific. This is her second time getting witchy with Civic. The first time she donned the green makeup and pointy hat there was in 2015.

But her connection to the witch goes way back. “My friends and I in the mid ‘70s started reenacting the iconic musical that was broadcasted once a year on network television,” she recalled.  I always played the witch because I could do the laugh and the voice. Truth be told, I loved being the villain – who doesn’t?!”

She also plays the part she lovingly refers to as “WWW” with The Spirit of Oz, a travelling acting troupe sanctioned by Warner Brothers. “In fact, The Spirit of Oz was invited by Warner Brothers to take part in the 75th anniversary of the film in Hollywood,” she said. “Our characters were on the red carpet next to notable munchkins and family members of the original cast. That inspired me to portray my characters as close to the original movie as possible, as a tribute.”

Both Leffingwell and Duggleby, who is also Civic’s Education Director, are thrilled to be back on stage in front of live audiences, even if it’s not in the beautiful historic downtown theater. An outdoor production does pose some challenges.

“With an outdoor show there are many things to troubleshoot,” Duggleby said. “We really wanted our production to feel like an immersive experience. In lieu of lighting, curtains, and large sets, we will be using two stages and lots of musical transitions to move characters from one scene to the next.”

Duggleby says Muncie Civic Theatre is her “dream job.”  “I just love it so very much,” she said. This is the sixth show she has directed for Muncie Civic. Her past credits include “Willy Wonka,”  “The Velveteen Rabbit,”  and “The Miraculous Journey of Edward Tulane.”

For “Wizard of Oz,” her hope is “that everyone just has the most fun that they’ve had all summer,” she said. “I anticipate people will come opening night and then need to come again. There really is so very much to see and catch. Our cast is simply wonderful and will have you laughing and crying at the same time.”

Muncie Public Library and Classroom Connections of ECI will be distributing free storybooks to children and youth from 6 p.m. to showtime at the June 18-20 performances.

For tickets or more information, call (765) 288-PLAY or go to www.munciecivic.org.