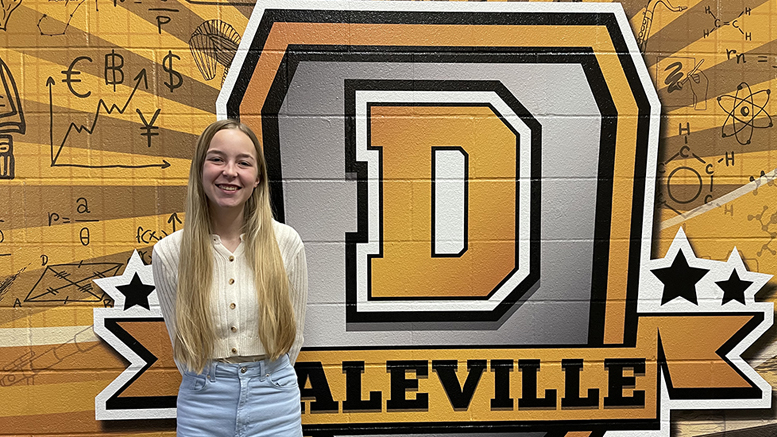 MUNCIE, Ind.—Editor’s note: The Future Leaders of America series profiles high school seniors who display leadership qualities in their school and the community. The series is brought to you by Pridemark Construction.

Focused is one word that describes Daleville Junior/Senior High School senior Lillian Haley. She decided on a career in first grade and has spent her high school career focusing on academics and school involvement.

Haley has been on her school’s academic team since ninth grade and placed in first and second places in the state in fine arts, science and social studies. In fact, Daleville Junior/Senior High School’s team is now ranked second in the state overall, which makes Haley proud.

Outside of school, Haley put her academic prowess to use by tutoring neighbors and elementary students.

Her interest in school paid off when she recently won first place in an essay contest from the Chesterfield Optimist Club.

“I’m not much of a writer, and it gave me the ability to be vulnerable in my writing, where you can’t really do that in school,” Haley said.

But academics aren’t the only facet of Haley’s life. She’s been on the varsity softball team since ninth grade and plays tenor saxophone in the band. This year, she’s on the band’s leadership team and has had success in solo and ensemble competition, placing gold during both her freshman and sophomore years. Haley has also worked with her grandma at a food pantry in Richmond.

Balancing everything can be challenging, but Haley has learned to break tasks down into pieces and plan her time well.

“When I feel overwhelmed with what I have to do, I am able to step back and actually look at the amount of stuff I have to do and rationalize that it isn’t as much as I was thinking it was,” Haley said, mentioning she doesn’t schedule extra activities when she has a lot going on with her studies.

And her studies will take her to college next fall. Right now, Haley is leaning toward Ball State University where she plans to major in biochemistry. She plans to become a flavor maker and eventually earn her PhD in food science or a related field.

As she is looking forward to her future, Haley has also advice for those coming up behind her.

“It looks a lot scarier than it is,” Haley said. “People always talk about how the workload is so much, and sometimes it is, but if you actually listen to the teachers when they tell you to break up your studying and don’t cram it, it makes your life a whole lot easier.”