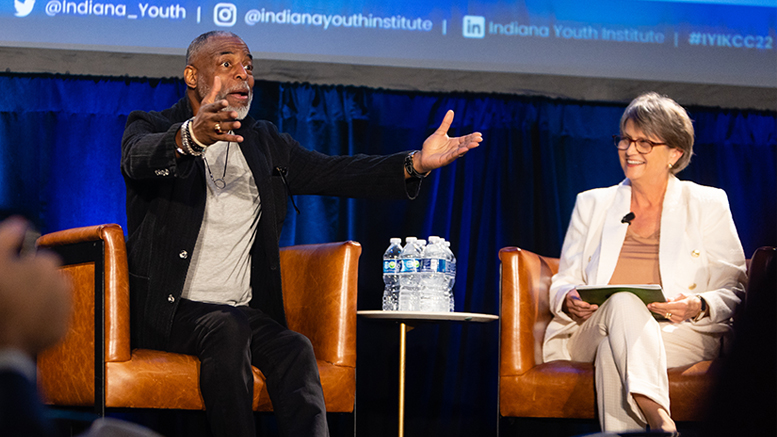 Read to your kids this holiday season

INDIANAPOLIS—For LaVar Burton, his earliest memory of reading came from his mother, an English teacher. “You were going to engage with a book,” Burton told youth workers at last month’s Kids Count Conference in Indianapolis. “You either would read one or be slammed upside the head with one; but you would engage.”

It was a parent’s insistence that set the course for young Burton, who by age 19, landed the groundbreaking role of Kunta Kinte in “Roots,” the television mini-series of the 1970s.

He went on to achieve further global acclaim as Chief Engineer Geordi La Forge in the iconic Star Trek: The Next Generation television series, portraying a person with a disability – another in a series of groundbreaking roles for Burton.

But it was as host and executive producer of the beloved PBS children’s series, “Reading Rainbow,” that secured LeVar Burton’s place among a certain generation. He was in his early 20s at the time. His love for reading – which he attributes to his mother – is inspiring even today. Reading Rainbow was not only one of the longest-running children’s television shows in history, but also one of the most acclaimed, earning more than 200 awards including multiple Emmys and a Peabody.

From slavery to intergalactic travel to reading, Burton has led the conversation.

Getting children to read remains a primary focus for educators and youth workers in Indiana. But they need our help.

A child’s ability to read, and understand what they are reading, by the end of third grade is the greatest predictor of community success. We’ve heard about this from Jenni Marsh, the President, and CEO of Heart of Indiana United Way. She says, it is this pivotal time when children transition from “learning how to read to being students who read to learn.” Heart of Indiana United Way has made literacy a primary focus.

Marsh says reading success begins well before third grade and is so much more than learning ABCs. Reading begins at birth when brains are making connections at a rapid rate.

Research shows that 70 percent of brain development happens before the age of 3. So, “when we talk to our babies, sing to them, and read to them, the neurons in their brains make important foundational connections and shape their future success with words,” Marsh says.

In fact, by the time children are 5 and are starting school, 90 percent of their brains have developed. Family members are a child’s first and most important teachers.

I thought about Jenni and the words I’ve heard her use to describe what is at stake as I prepared to interview Burton, whose Indiana connections run deep. His wife is from Fort Wayne.

Burton said he is often asked “how do I get my kids to read.”

“I always ask, what are you reading?” “Are they seeing you read?”

Children need to see it to be it. This holiday season is a great time to read to our kids.

Burton remarked youth workers, who are the frontline soldiers in afterschool homework, are at “the point of purchase.” “You are doing heroic work where the rubber meets the road, in the trenches, where the work really is.”

No matter our occupation, we’re all youth workers at some level. IYI is the agency that brings the oh-so-important context to the work that needs to be done. Burton raised the visibility of that work. Nothing less than the economic and social wellbeing of our children is at stake.

Juli Metzger, an educator, journalist, and publisher, serves on the board of directors for Indiana Youth Institute.