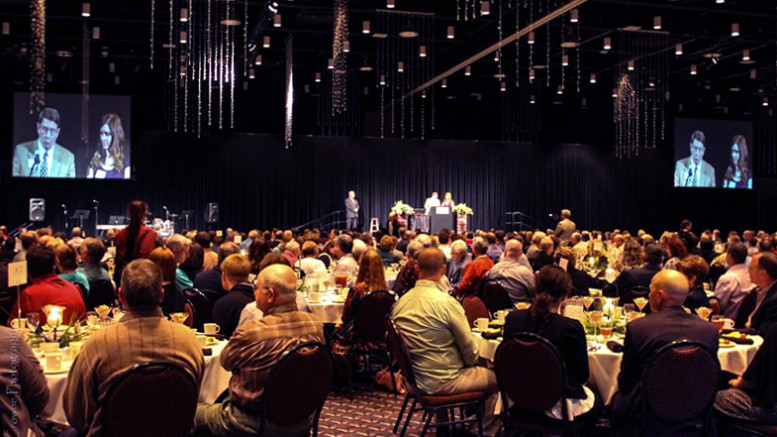 A scene from a past year's FCA banquet. Photo provided.

The Fellowship of Christian Athletes of East Central Indiana is very happy to announce that WNBA Superstar, Tamika Catchings will be the special guest for the 2016 FCA Banquet Thursday April 21st at the Horizon Convention Center. As a young girl with both speech and hearing impairments Tamika chose basketball and her faith as tools to help her overcome her obstacles. After an incredible high school career she played under Pat Summit as a Tennessee Volunteer. Her legendary collegiate career included an undefeated NCAA national championship season. She was a first round draft pick by the Fever in 2001. Tamika Catchings is one of the best to ever play in the WNBA being named: WNBA MVP, 11 X ALL WNBA, 5 X defensive player of the year. She led the Fever to the 2012 WNBA Champions and is a 3 time Olympic gold medalist. We look forward to hearing an inspiring message from Tamika.

For more information or to register as a sponsor, table host, or to attend the banquet go to: www.indianafca.org/munciebanquet.

To become a sponsor and help underwrite the cost of the banquet contact: Bill Peckinpaugh @ bill@peckinpaughfinancial.com (765) 288-1967.

All major sponsors will be invited to a VIP reception and photo opportunity with Tamika.

To register as a table host or to attend the banquet go to www.indianafca.org/munciebanquet.