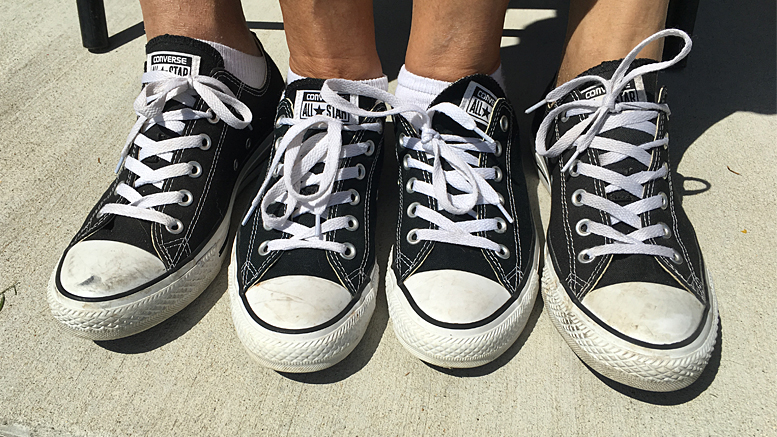 In All Stars as in life, four beats two. Photo by: John Gordon Carlson

Nan and I are often told we have adorable feet.

Well, OK, maybe not “adorable,” per se. As a couple having reached senior-citizen status, after 65-plus years of hoofing it, our feet are more likely merely “normal” for our age, meaning bunged-up and weird looking.

And while I used the word “often,” we were actually told that “once,” and not at some prestigious “adorable feet-judging contest.” It was at Nan’s family reunion, a gathering of genuinely nice people who are always cognizant of others’ feelings. They would be shocked were Aunt Gertie to spot our feet, slam down her Bud Light can and blurt out, “Where’d you losers trap those ugly puppies?”

So to be perfectly accurate, Nan and I were once told by her kindly relatives that we have semi–adorable feet, but only when they’re covered by our matching black Converse All Stars.

These being your classic rubber-toed tennis shoes – something akin to the sneakers many of us wore as kids – they look retro-cool. Take a guy with really ugly feet like, say, The Elephant Man of 19th Century London. Even his feet would have looked spiffy in Converse All Stars, if he could have jammed them past his grotesque calcified bone spurs.

Still we, or at least I, don’t wear my All Stars solely for their outrageous sex appeal. In aging, I often find the performance inherent in a trusty pair of sneakers remains vital to maintaining my quality of life.

For one thing, in my All Stars, I can stop on a proverbial dime. Back in my athletic prime, this was important on the court during high-stakes, elementary-school basketball games, allowing me to out-maneuver opponents up to 4-feet-tall before launching another stinkin’ air ball.

Some might say quick stopping is less important at my age. It’s true that on few occasions since retiring two years ago have I moved faster than ketchup pours from a fresh bottle of Heinz. Still, in the senior game of life pitting man against bladder leakage, quick stopping is vital, when overshooting the bathroom door – even by a couple inches – can mean disaster.

And another thing. With my All Stars laced tightly to my feet, I pretty much avoid the loose rubbery slap my Crocs make crossing an uncarpeted floor. If Nan is lurking near the kitchen, this can mean the difference between success and failure when sneaking another celery stick, some yummy broccoli or a couple handfuls of cheesecake.

Also, while I’ve already explained why nobody ever nicknamed me Speedy, when the kids finally ship us off to Shady Acres, the traction will help me elbow past the duffers racing me to the cafeteria’s bacon station.

Still, I think my wife and I both agree that the best thing about wearing our black matching Converse All Stars is what they do for our image. These shoes say we are sharp, vital, “with it” senior citizens, the kind who shysters can’t scam into paying $3,000 to blacktop our cement driveway.

That’s a good feeling, you know. One of empowerment. It’s like, walking past crowds, we can practically read on people’s admiring faces what they are thinking. “Wow, look honey! I just hope we’re half as cool as those two hipsters when we’re in our mid-60s!”

Although, I suppose there is an outside chance they’re actually thinking, “Wow, look honey! Two delusional geezers stumbling around in their Converse All Stars, pathetically lost in their second childhoods.”