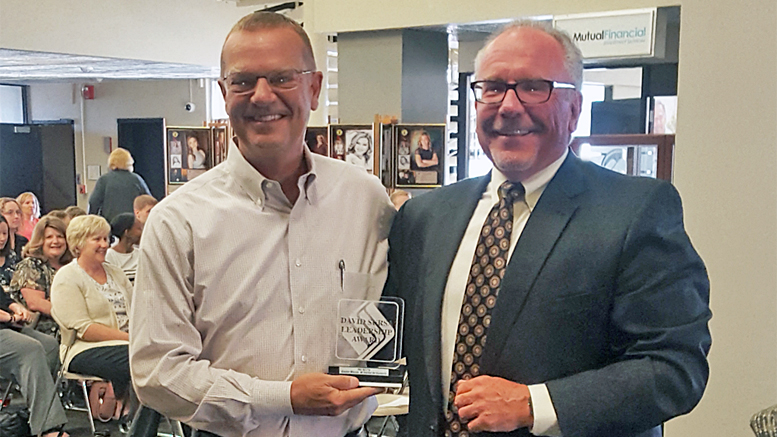 Pictured (L-R): Pat Botts is presented the 2017 David Sursa Leadership Award by Jeffrey R. Lang, Chairman of the Board of The Community Foundation. Photo provided.

Muncie, Ind. – The Community Foundation of Muncie and Delaware County, Inc. has announced that Pat Botts has been awarded the 2017 David Sursa Leadership Award to recognize his dedicated service to Greater Muncie, IN Habitat for Humanity.

Botts was nominated by Habitat for Humanity, where he served on the board from 2002 to 2016. Over the years he served as Chair, 1st Vice Chair, and 2nd Vice Chair. He also served on the Finance, Budget, and Executive Committees.

“Pat Botts has dedicated well over a decade of his life to Muncie Habitat for Humanity’s Board of Directors!” wrote Habitat CEO, Lindsey Arthur. “Pat was recruited to join the Board of Directors in 2002 and from ‘day one’ gave it his all.”

Arthur specifically noted Botts’ focused dedication to bringing long-lasting financial health to Muncie Habitat. Botts, who is the President and COO of MutualBank, has an expertise in banking, mortgage lending, and financial services. He readily shares his depth of professional knowledge, insights, trends, and cutting-edge ideas to challenge and encourage other board members and staff.

Botts was selected for the David Sursa Leadership Award because of his longevity, breadth of service, and his impact. This was illustrated by his involvement with creative fundraising including the Accelerated Asset Recovery program and the launch of the ReStore. He was also engaged in the development and implementation of three strategic plans which led to expansion of services beyond new construction, expansion of services into three county towns, and increase in the number of families served with homeownership annually. He also was instrumental in the selection of the target location for the Neighborhood Revitalization efforts.

Botts was surprised with the award during a MutualBank staff meeting on July 25, 2017.

The David Sursa Leadership Award was established in memory of the Foundation’s first leader. As Founding President, David Sursa blazed the trail for The Community Foundation.  His visionary leadership contributed significantly to the success of the Foundation and to the generous support it has provided to our community.  The annual program rewards, recognizes, and encourages extraordinary nonprofit leadership by a board member displaying the characteristics and commitment to community expressed by Mr. Sursa during his lifetime.

Additionally, in David Sursa’s honor and to commemorate the award, The Community Foundation of Muncie and Delaware County awarded a $1,000 grant to Greater Muncie, IN Habitat for Humanity.