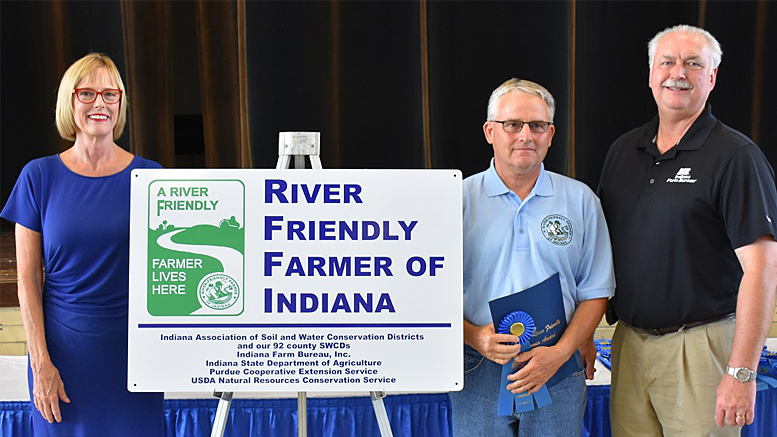 Muncie, IN– Out of 58,000 farms in the state of Indiana, one farm in Delaware County received the statewide award of River-Friendly Farmer at the Indiana State Fair on Farmers’ Day August 16.

Mr. Larry Shreve was among 49 farmers who received the River-Friendly Farmer award from the Indiana Association of Soil and Water Conservation Districts (IASWCD) for the work he did on his land to protect Indiana’s natural resources.

The Delaware County Soil and Water Conservation District nominated Mr. Larry Shreve for the award based upon his farm management practices that protect Indiana’s rivers, lakes, and streams.

The River-Friendly Farmer Award has been presented by the IASWCD and sponsored by the 92 local Soil and Water Conservation Districts, and Indiana Farm Bureau, Inc. since 2000. This year’s group of award winners brings the total number of River-Friendly Farmers in Indiana since the awards beginning to 912.

For a complete list of this year’s winners along with a short bio and photo (if provided), go to: http://iaswcd.org/river-friendly-farmer-award/.