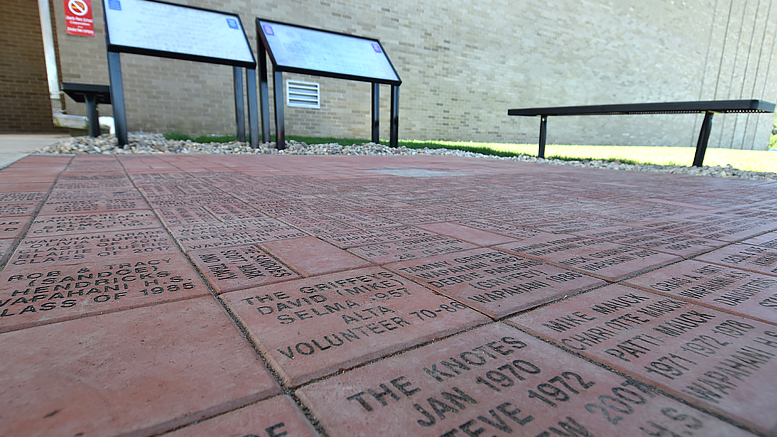 The idea for an alumni engraved brick walkway for Liberty-Perry schools began in February 2016 at a breakfast meeting with 1977 Wapahani graduates LPAA president Richard Morris II and LPAA vice- president Bob Vandevender. Bob had the idea of producing an alumni engraved brick walkway as a fundraiser for the LPAA. One thing lead to another and through utilizing all local businesses for supplies and installation, bricks began selling on August 4, 2016. Over 200 engraved bricks has been sold, engraved and installed into the walkway with several small and large sized bricks still available. A Muncie Chamber of Commerce Red Ribbon Cutting Ceremony for the alumni walkway is scheduled for 1:00 pm August 23, 2017, to kick off Selma Bluebird Days. A very special thank you to all those involved in the production and installation of this historic alumni engraved brick walkway. Those local businesses are Dogwood Builders, Tri-County Builders Supply, First Merchants Bank, A-1 Graphics, Thompson Welding & Steel Fab, Inc., Short’s Glass & Plastic, LLC and Awards Plus.

The Liberty-Perry Alumni Association (LPAA) is a 501©(3) non-profit organization that serves Wapahani, Center and Selma high school’s alumni. Established in 2008, the LPAA currently has two scholarships that are given annually to graduating Wapahani Seniors. The LPAA also produces the annual Wapahani All Classes Reunion. 2017 marks the 4th annual All Classes Reunion which will be held on Sunday, August 27, 2017 at Vera Mae’s Bistro. With the immense success of the alumni walkway brick sales, the LPAA is eager to increase its scholarship amenities and produce a high quality all classes reunion in preparation for 2018, when the first Wapahani graduating class of 1968 will celebrate its 50 year class reunion.

Alumni engraved brick walkway details and brick order form can be found on the LPAA website, along with news, gallery, scholarships, reunions, donations and webstore. www.libertyperryalumni.com