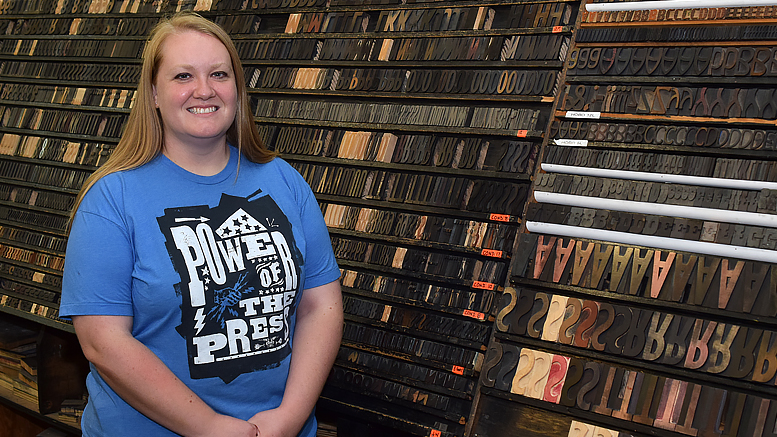 Kim Miller, owner of Tribune Showprint, is pictured in front of the "type wall" inside her shop at MadJax. Photo by: Mike Rhodes

I work in a factory in Muncie, Indiana. Not many people can say that these days.

In fact, many believe that Muncie’s best days–our factory days–are behind us. Our schools are going through budget and transportation issues and a third of our citizens live in poverty.  There’s a lack of hope that we can’t be more than our struggles. That we can’t thrive without factories.

I don’t work on a factory line, but I do make things. I create stories.

For the last ten years I’ve traveled around the world to meet the people who produce many of the things in our lives that we take for granted. I’ve worked alongside coffee farmers in Colombia, befriended young women who made blue jeans in Cambodia. I’ve crafted their stories to share with the world.

I’ve created The Facing Project, a community storytelling nonprofit, along with my co-founder J.R. Jamison and the hundreds of other folks in Muncie and thousands of others across the nation who’ve participated.

Outside wall of the offices of The Facing Project and Farmhouse Creative.

I’m proud to be a maker in a factory of makers.

The factory was an industrial laundry first operated by Midwest Towel and then Cintas. It’s my understanding that they washed uniforms and carpets at the facility. With a decline in need of factory uniforms and carpets, maybe they didn’t need 100,000 square feet (or whatever the size of the cavernous building is). So it sat empty like so many other industrial buildings in Muncie–a shell of a building, echoes of labor long forgotten. A city-block-sized reminder of what was and of what we were.

But no longer. The building has new tenants.

Tribune Showprint makes fair and concert posters using steel behemoth printing presses. Kim and Rob Miller walk around with inky hands that are always ready to help a fellow MadJax member. They printed posters for a Facing Project fundraiser, printed our T-shirts, and Kim even brought me over a surprise cupcake made by fellow Muncie maker Amanda Reninger at her business Sea Salt & Cinnamon. 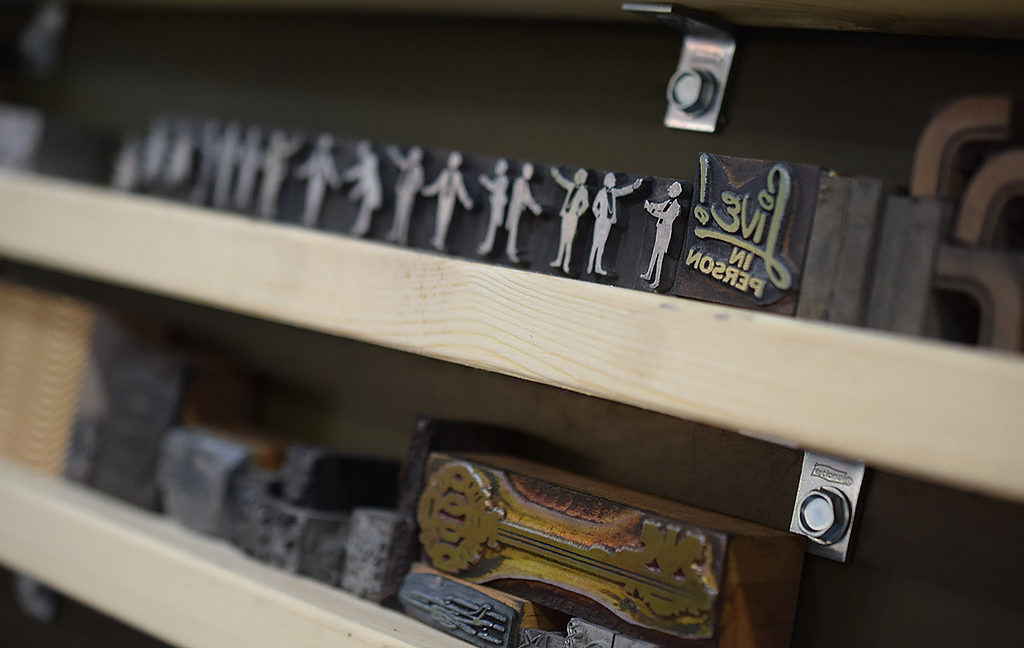 A collection of “dingbats” at Tribune Showprint. A dingbat is a typographical device other than a letter or numeral.

In the hallway Debra Dragoo’s art is for sale. Some of it hangs in the work stations of those who work in the Co:Lab where my office is with The Facing Project. Next door is Farmhouse Creative owned by Angie Howell. Angie has designed and printed thousands of Facing Project books. Angie was a writer for a Facing Project. 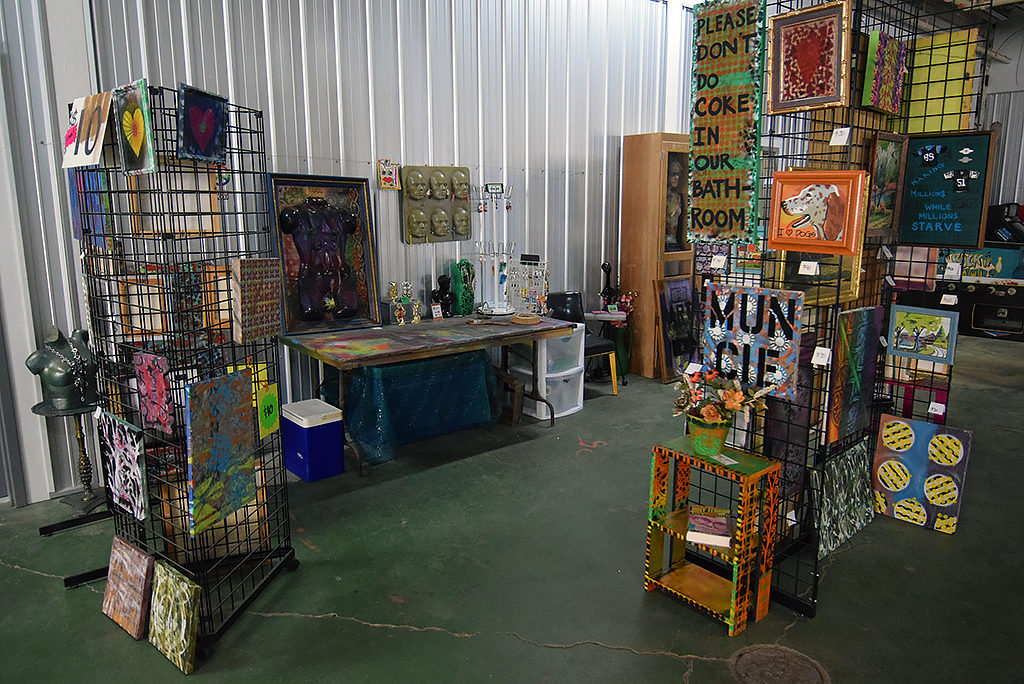 There is also a co-working space where Facing Project board member Stephanie Fisher works for SpinWeb. Shane and Jake are programmers with business sense always willing to bounce ideas around. Marissa works for BY5 promoting child literacy and will get fired up about the needs of our community. Melanie Howe of Addison Avenue Marketing is always ready with a DIY marketing tip. She brings an enthusiasm for the day that makes you want to get shit done and have fun while doing it. I talk Kung Fu and writing with Ken Ring and fair and clean food with Alyssa Harmon. Brad Daugherty of Hoola Technology, and a founding member of the Co:Lab, regularly offers advice on how to keep our computers from exploding. And Jennifer Greene manages our community and makes sure we have a fun, efficient, and clean place to work.

Out my window I can see the giant assembly hall where actors from Muncie Civic Theatre rehearsed Facing Project stories every Saturday in June, and Ken Ring teaches martial arts at night. Upstairs, students with PhyXT Gears make robots to compete and often win national competitions. Soon Guardian Brewery will be open and we’ll all (except the students) be able to grab a pint without walking outside.

We have a foosball table, a ready-to-be assembled pool table. I’m trying to convince Jennifer that we really need a basketball hoop.

A few months ago, Ben, a twenty-something transplant moved into town. I think he was unofficially crashing at his girlfriend’s dorm at Ball State and didn’t have anywhere to work. He found MadJax. He’s a smart, creative dude who had launched a kickstarter that funded a $40,000 journal for baristas and bartenders. After that he started a content business. The Facing Project was his first client. He does amazing work sifting through our 1,000+ stories to find inspiring and poignant content to share. Someday he’ll be a tech billionaire or president. 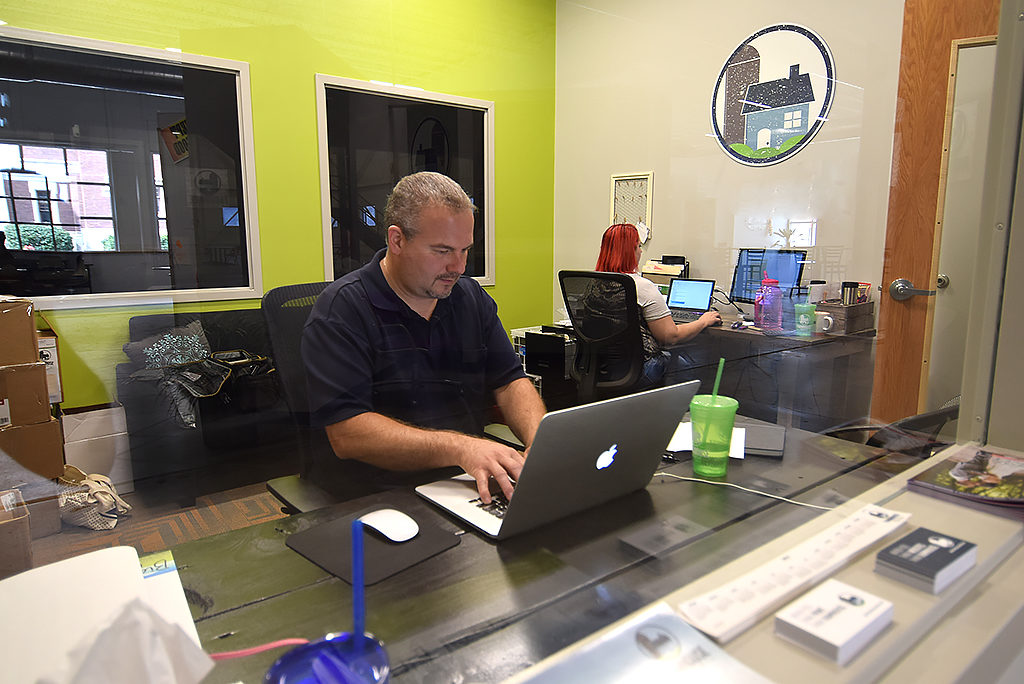 The offices of Farmhouse Creative.

MadJax isn’t about what was, but about what will be. At MadJax there’s hope and possibility and belonging to something that is moving forward.

Lately, the local paper has focused on the cost of MadJax as the city council decides if it is worth it. I’m not trying to convince them it is. I think many people in Muncie have no idea what MadJax is, where to park, what happens in there, what the community is like. The intent of this article is to answer those questions.

Some community leaders who love our community wanted the space to be something else from the beginning. That’s fine. I appreciate their passion and dedication.

Some of the most creative forward thinking minds in Muncie that I know, who helped create what MadJax could be, are no longer directly involved with the project. I admit, I’m bummed that they aren’t. I looked forward to having them as active members of our community.

No doubt there have been bumps and hiccups. I’m sure budgets have been exceeded and for sure timelines have been delayed. The idea of MadJax has always been fluid. But the space itself has been shaped by those who have filled it.

Some argue that there are no “makers” in our makerspace. Makers as they define the term use saws, digital printers, and potter wheels. From my understanding there are still plans to create that space and community. When they move in our community of makers will be ready to greet them and talk art, community, business plans, websites, and stories. I’m sure we’ll learn from them and they’ll learn from us until there is no us and them. That’s how community works.

MadJax can be hard to explain, maybe that’s why there’s confusion about it.

Recently, a piano randomly appeared in our community space. Someone has been playing it at different times throughout the day.

Music echoes in a space that once required ear plugs.

Kelsey Timmerman is the co-founder of The Facing Project. He’s currently in Nairobi researching his 3rd book– Where Am I Giving: A Global Adventure Exploring How to Use Your Gifts and Talents to Make a Difference.