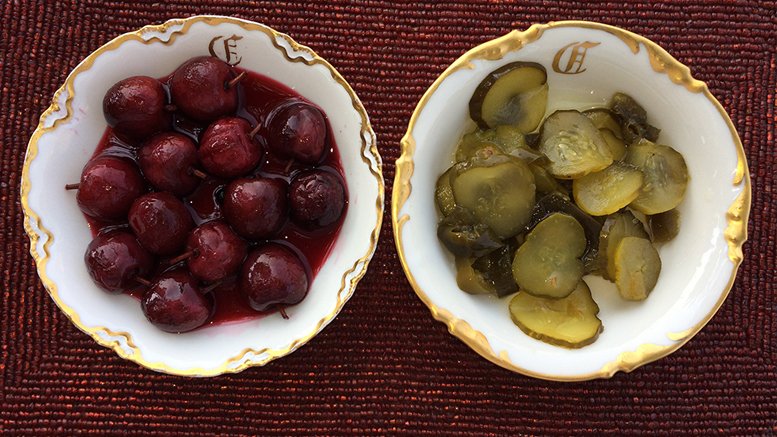 Pickled cherries and hot Amish pickles are cause for hope. Photo by: Nancy Carlson

In a week or so my wife, Nancy, will be joining her sisters on a trip to Europe, leaving me alone to wallow in a morass of self-despair while struggling against long odds for simple survival.

Not that she should feel guilty about it or anything.

It’s just that, before she goes, we must stock up on some basic necessities I will require to get by while left to my own devices. This is so that when she returns, she will still recognize me – though barely – in the gaunt, gray ghost of the man who once was her chubby hubby, hopefully without my having resorted to eating our neighborhood’s chipmunks to survive.

For one thing, I’m gonna need a case of Hostess Ding-Dongs.

I’m also gonna need fresh Fritos, and lots of Payless pimiento cheese spread for them to scoop into my gaping maw.

And while I guess I’ll say it anyway, it goes without saying I’ll need several packs of Hebrew National hotdogs, some of Fisher’s Meats’ fine braunschweiger, a gallon of deli baked beans, several prepared meat loaves, Cheezits, big olives, pork rinds with three bottles of Frank’s RedHot hot sauce to pour on them, garlic bagels with a huge brick of cream cheese, plus a couple hefty cheesecakes, preferably of the chocolate-caramel variety.

At this point, I can already hear those in my inner circle of friends talking earnestly about this extraordinarily unusual diet.  “John,” they are saying. “That seems like a remarkably mature and sensible grocery list! But aren’t you forgetting something?”

If by that they mean pickles, the answer is, “Nope.”

As a guy who has always considered pickles as much a major food group as St. Elmo’s shrimp cocktail sauce, my fridge has remained stuffed with them. Not the cheap, crappy ones, either, but real good pickles.

They say a guy always remembers his first girl, but what I remember is my first giant dill. As a northern Ohio kid, on hot summer afternoons we’d carry our precious quarters to Isaly’s Dairy up on Cleveland Street. While my friends bought ice cream cones, I was always the dork with his nose pressed against the glass protecting the pickle bucket.

Granted, I was smaller then, but for my 25 cents, the counter guy invariably handed me a pickle the size of an NFL-regulation football. While the other kids smilingly slurped their drippy sugar cones all the way home, I’d be wolfing down that sour sucker with an appreciative grimace, and loving every hackle-raising bite of it.

But as I aged, I learned life could be fickle, pickle-wise.

Somewhere along the line, American pickles became those limp things characterized by noodle-like flaccidity. They tasted less like deli dills and more like some poor cucumber that had been waterboarded within an inch of its life with gallons of polysorbate 80.

In short, it was a pickle I wouldn’t have fed my dog.

Sad as that was, though, in exploring other pathways to pickle pleasure, it opened me up to a brave new world of pickling.

As I write this, my fingers appear to be bleeding. That is because I am grabbing the cherries directly from the Ball jar my dear friend Jen Merritt pickled them in. I’m also thinking maybe, just as a little joke on Nancy, I will use the blood-red juice to scrawl “day 13 … running out … of … pork rinds …” on the kitchen wall right before she gets home.

Then I’ll pretend to be dead.

Yeah, that’ll teach her to go to Europe without me.

But how do these pickled cherries taste?

With just a hint of sweetness contrasting with the tart pickling, all I can say is, they ain’t no stinkin’ maraschinos, mister. They are darned good.  Also, I am reliably informed by lowlife friends who imbibe beverages from the devil’s distillery that they stand up well to a stiff Manhattan, or even several stiff Manhattans.

While I am pretty sure Jen isn’t Amish, her pickled cherries would fit right into the Plain People’s pickle palate. I only mention this because, in between pickled cherries, I’m also downing some Sweet Flame Pickles from Fountain Acres, the Amish grocery store.

Face it, it’s not as though most Amish folks are out there living life in the fast lane, drag racing their buggies and making out behind the corn crib at barn-raisings.

At least, I don’t think they are.

But they do seem to make up for their staid lives in crazy pickle production. These pickles really perk up a toasted-cheese sandwich. Even more to the point, my tastebuds are hollering “hot dang” over the last three forkfuls of Sweet Fire Pickles I’ve just shoveled into my mouth, all in the quest for literary inspiration.

For pickle patrons, then, these and Jen’s pickled cherries are signs of a better day coming for the terminally pickle-addicted.

I saw another sign of hope the last time I shopped at Lahody’s Meats. There in the shop’s pickle place rested containers full of huge dill pickles, pickles that harkened back to the dill days of my pickled youth.

All I could do was shriek, “Eureka!”

That, and buy myself some big honking pickles.