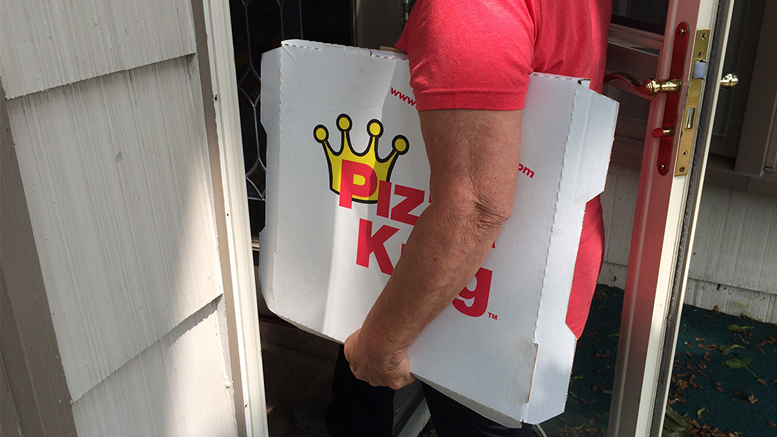 This is how NOT to carry a Pizza King pizza into your house. Photo by: John Carlson

After moving into a smaller place going on four years ago, Nancy and I put up an eight-foot fence out back, which is great.

For one thing, we can just let the dogs out, instead of walking them around the yard until they finally get the urge to … well, you know. Our fence also serves as a nice backdrop to our beloved little birds, bees and butterflies garden. Plus, when the weather is nice and depending on the time of day, I can sit out there sipping my coffee wearing my boxer shorts decorated with the funky frolicking dachshunds motif, though perhaps the less said about those the better.

Our plain tan fence’s appearance bores me witless, though.

After all, before it was built, from my back deck I could see my neighborhood’s Golden Arches located across from our old  Burger King. While I couldn’t see Victor’s Pancakes and Gyros, per se, I knew from the warm delicious glow it was just down the street. So was the Chinese fried dumpling place, the sushi place, the Mexican eatery and margarita purveyor Puerto Vallarta and, way up at the corner, Timber’s, with its magnificent creamy coleslaw and tasty Whitey Burger.

As a chubby guy with the topic of food consumption almost constantly on my mind, I was greatly comforted by all this.

Even more comforting, though, I could see my neighborhood Pizza King, and close my eyes to fantasize about the delicious goings-on there. Being a true believer in the redemptive power of its 16-inch sausage pizza with extra cheese, I adopted Pizza King as my sort of pizza Mecca, the site of many gastronomic triumphs in my otherwise ho-hum life, all in the form of some freaking killer pizzas.

And, alas, it was also the site of some extremely depressing pizza defeats.

There was the time early in our marriage when Nancy – her thoughts perhaps frivolously occupied by paying our utility bills or figuring how to eventually put our kids through college – absentmindedly walked into our house carrying the Pizza King box straight up and down under her left arm, like a book.

Of course, anyone could be forgiven for one such foul up, so I decided to forget about Nancy’s foolish faux pas after only twenty years or so. But then …

This other pizza tragedy took place back in my cigarette-smoking days, and once again involved a 16-inch Pizza King sausage pizza with extra cheese, which you might guess by now is my personal favorite. But back to the story. Between Nancy, our sweet baby Katie and I, we’d only eaten half of the pie before we were stuffed. Having left our table to pay the bill and fetch a carry-out box, I smiled to see Nancy suddenly standing alongside me at the cash register, holding our adorable daughter.

What she wasn’t holding, I suddenly realized, was our adorable leftover 16-inch Pizza King sausage pizza with extra cheese.

“Noooooo!!!!” I screamed, like somebody watching a line of baby ducks trying to cross McGalliard Road down by the mall during Christmas-shopping season. Knocking over chairs and old people, I tore back to our table, just in time to see our waitress dump my ashtray crammed with Marlboro cigarette butts directly onto the leftover pizza, which she understandably assumed we had abandoned.

Later, I was told that none of the employees had ever seen anybody cry that hard inside the place before. Not a guy, anyway.

It’s funny, but in the 35 years since that tragic evening, Nancy has never forgotten the incident, mostly because I still yell about it at least once a week.

Anyway, back to our boring fence. I’ve pondered painting it with a groovy outdoor beach scene from our favorite vacation getaway, just to liven it up. Crashing waves. Cavorting dolphins. Wheeling pelicans. Or maybe crashing, cavorting, wheeling beach bunnies in skimpy bikinis. These would include the tall one with the long raven hair who strolls seductively past us in the sand twice a day, a parrot intriguingly perched on her beautiful, though what must occasionally be white-splattered, shoulder.

Yeah, that’d make a pretty picture, even with the guano.

But I don’t know. Recognizing my life’s true passion, I may just paint a Big Mac on there, and a nice plump gyro with feta cheese, tomato and onion. Then again, maybe I’ll add a couple hefty burritos surrounded by a mess of golden brown Chinese dumplings and some sushi rolls. And perhaps, topping it off in homage to Timber’s, a beautifully seductive Whitey Burger with an enticing side of slaw.

But, of course, I’ll also paint a 16-ounce Pizza King sausage pizza with extra cheese. Then maybe I’ll add a message for the little Pizza King guy pictured on the carry-out box, one that captures the special place he holds in my heart, like: “You’ve added immeasurably to my joy and satisfaction in this life, little Pizza King guy. And that’s why, as long as I have breath in my lungs and measurable brain waves emanating from whatever it is that’s stuffed between my ears … I’ll love you, man!”

Or maybe I’ll just add rocker Henry Rollins’ immortal pronouncement that I found by spending a half-hour searching on the Internet for “inspirational pizza quotes.”

“Pizza makes me think that anything is possible,” he said.

Sniff. Kind of brings a tear to my eye.