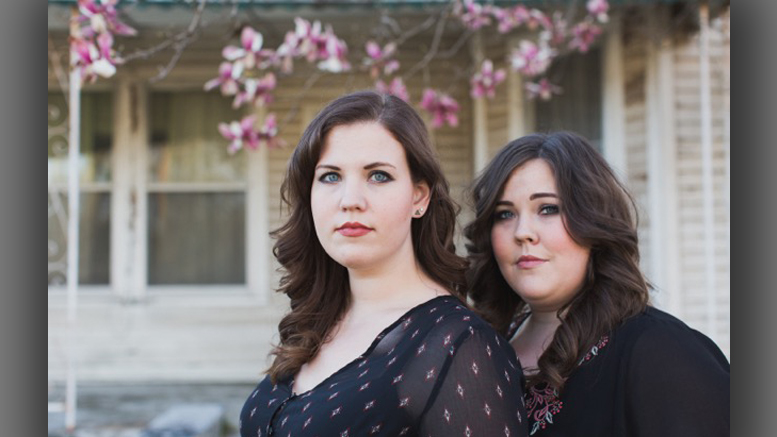 Muncie, IN –Folk/country group and New West recording artists The Secret Sisters will be performing in a FREE outdoor concert as part of the 2018 Muncie Three Trails Music Series. This concert is sponsored by the Community Foundation of Muncie and Delaware County and will take place at 7:00 PM on Saturday, September 1st at Canan Commons (500 S. Walnut St.) in the heart of downtown Muncie, IN. New folk duo Von Strantz will open the show.

The Secret Sisters have had an interesting journey leading to their Grammy-nominated 2017 album, You Don’t Own Me Anymore. An open audition in Nashville in 2009 lead them to a major label deal and a debut record produced by T-Bone Burnett and Dave Cobb, followed by a tour with the legendary Levon Helm from The Band.  From there, they were invited to open tours for Bob Dylan, Willie Nelson and Paul Simon, appeared on numerous late night shows and released a second album with Burnett. However, after their second album, Put Your Needle Down, didn’t perform according to their label’s expectations, the duo was dropped, leaving them with barely enough money to stay on the road and keep making music. So they retreated home to Alabama, scraping together whatever they could while trying to embrace what seemed to be a future without music. But then fellow artist Brandi Carlile volunteered to help them produce their third album, and everything fell into place. The resulting songs on the Grammy-nominated You Don’t Own Me Anymore are about life when everything you think defines you is stripped away: from “The Damage,” as gorgeous as it is haunting, that speaks directly to those that did them wrong, to the first single “Tennessee River Runs Low,” that imagines the willful flow of a powerful river. These are journeys as poetic as they are confessional, always anchored by the timeless, crystalline ring of Laura and Lydia’s voices in sweet unison.

The Muncie Three Trails Music Series is a non-profit partnership between Muncie Downtown Development Partnership, Muncie Arts and Culture Council, and Rick Zeigler, series founder and organizer. The mission of the series is to bring critically acclaimed, national recording artists to perform at Canan Commons, Muncie’s premier outdoor performance venue, located in the heart of Downtown Muncie. A second mission is to promote the many recreational, artistic, and cultural attractions located along, or in close proximity to, Canan Commons and Muncie’s popular “Three Trails” — The White River Greenway, Cardinal Greenway, and Muncie Arts and Culture Trail. We hope attendees will heed our slogan, “Explore the Trails, Enjoy the Music.” Complete information about the Three Trails series can be found at www.munciethreetrails.com.