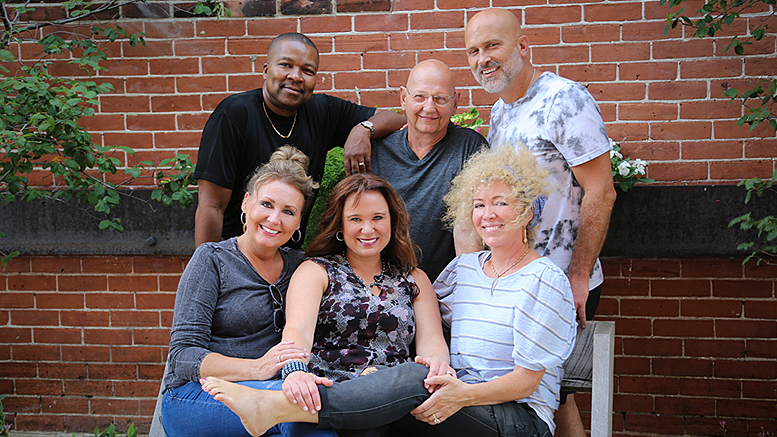 Muncie, Indiana—There was magic in the air Monday night as five area musicians, all with their own demanding schedules, came together for a marathon rehearsal – the first of several planned — for the upcoming Voices (Re) United concert in downtown Muncie.

It’s been 11 years but it felt like just yesterday, they said. Musicians picked up where they left off in 2007, which was the last time Cook and Belle, Jennie DeVoe, Keith O’Neal, Jennifer Stanley, and Carl Storie performed together for a cause they all believe in – helping battle generational poverty by supporting United Way’s focused plan to have all third-graders reading at grade level by 2024.

“United Way is a champion for struggling children and families. To be part of Delaware County’s most important fundraising effort is not only a gift to others, but to all of us who get to share our talent for such an important cause,” said DeVoe, a Muncie-native and Voices United artist. “We hope everyone wants to be part of the United Way solution.  We want to inspire others to lend a hand, their voice, and their money to those who fall on hard times and struggle,” she said.

Storie, who is battling non-Hodgkin lymphoma, wanted to be back for the concert because he knows, more than ever, the importance of lifting up those who can’t do it on their own. Even though chemo treatments take a toll, Carl is determined to be standing alongside the other artists in support of the community.

Voices United, established in 2004, ran for five consecutive years, played to sold-out houses at Emens Auditorium, and raised more than $250,000. But even more important, the performances raised awareness for the cause.

“At the time, we thought five years was enough,” said Casey Stanley, the Voices United mastermind and husband to artist Jennifer Stanley. “It’s a lot of work for all of them, including nights, weekends, and many hours of preparation. But we think the cause is important. Each genuinely believes in the cause.”

On the second Thursday in September (Sept. 13th) in downtown Muncie, there is no cover charge to come watch Voices (Re) United kick off the annual fundraising campaign for United Way. In fact, the artists hope what you might have paid to get into a concert could be the inspiration for an annual payroll deduction or one-time contribution to United Way.

The concert will include two sets – the first an opportunity to feature each artist more individually and the second which includes classic tunes by your favorite artists, performed together as the Voices United team. The musicians are singularly talented, but it is their combined performance that makes the magic, that makes great things happen.

“It’s like United Way itself,” Casey Stanley said. “United Way, by purposefully working with 28 nonprofit programs to address early childhood education, are able to move the needle for a single, great cause: end generational poverty by addressing third-grade reading level attainment. Our community, rallying together through United Way, can accomplish big, bold things.”

Today, nearly half of Delaware County households live in poverty or are one crisis away from it. In Muncie, the numbers are 6 in 10. A new statewide report shows Delaware County is home to more children living in poverty than any other county in the state.

“The community’s future is at stake,” said Jenni Marsh, president and CEO of United Way of Delaware County. “But we have a plan toward a prosperous future for Delaware County. With a bold goal of having all third graders reading at grade level by 2024, we are already making great strides.”

Since 1925, the Delaware County community has given more than $275 million (in today’s dollars) to the United Way to provide a lifeline to its neighbors in need.

“Voices United is not only an opportunity to sing and play some great music, reunite with great friends, and allow us to help raise money for educating our young people, but it brings our community together to focus and celebrate the bright future that’s in store for all of us as we unite our hearts, resources, and efforts to live united,” said Bishop Keith Oneal, the lead pastor at Destiny Christian Church and a new member of the Muncie Community Schools Board.

Last year’s event drew more than 2,000 to the downtown. Once again, local brewers, The Heorot, Elm Street, and The Guardian Brewing Company will be on hand.

This is the only kind of event like this they ever play. But they do it because the work is transformative.

Organizers say be prepared for something even more at the Sept. 13 concert. They’ll only say, it’s “a surprise,” or expect a “memorable musical experience.”

“We loved the first five Voices United concerts, but we feel like this will be even more fun,” said Michelle Cook, half of the Cook and Belle duo who is performing. “On Walnut Street, we will be so close to the people, it will be a serious party!”