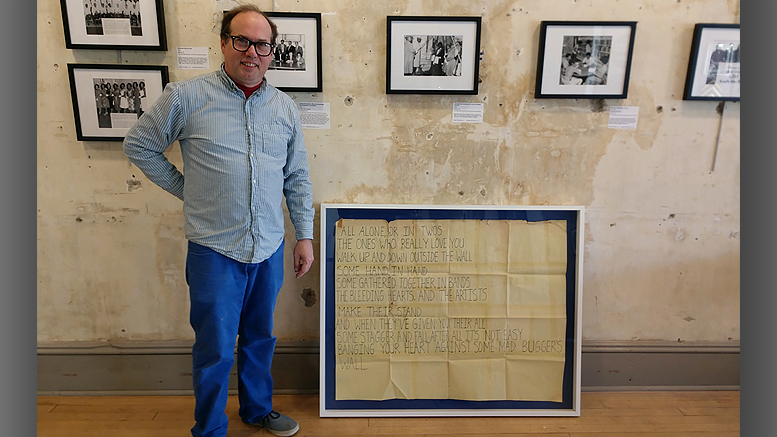 Mark Perretta works at Gordy’s and had the opportunity to frame a number of original pieces of memorabilia from the classic rock group Pink Floyd.

Russ Castillo is a former Muncie resident who recently moved to Santa Monica, CA. Castillo worked in the recording industry during the creation of Pink Floyd’s “The Wall” album and before moving to California, he had an open house during the Old Washington Street Festival. Perretta attended the open house at Castillo’s home and the two men struck up a conversation about some of the audio equipment in the home. The conversation then moved to a discussion about how Castillo had worked at the Producer’s Workshop in Los Angeles during the recording of Pink Floyd’s “The Wall” album.  A few days later, Castillo showed up at Gordy’s with a few one-of-a-kind Pink Floyd pieces to have framed.

The story behind the artwork 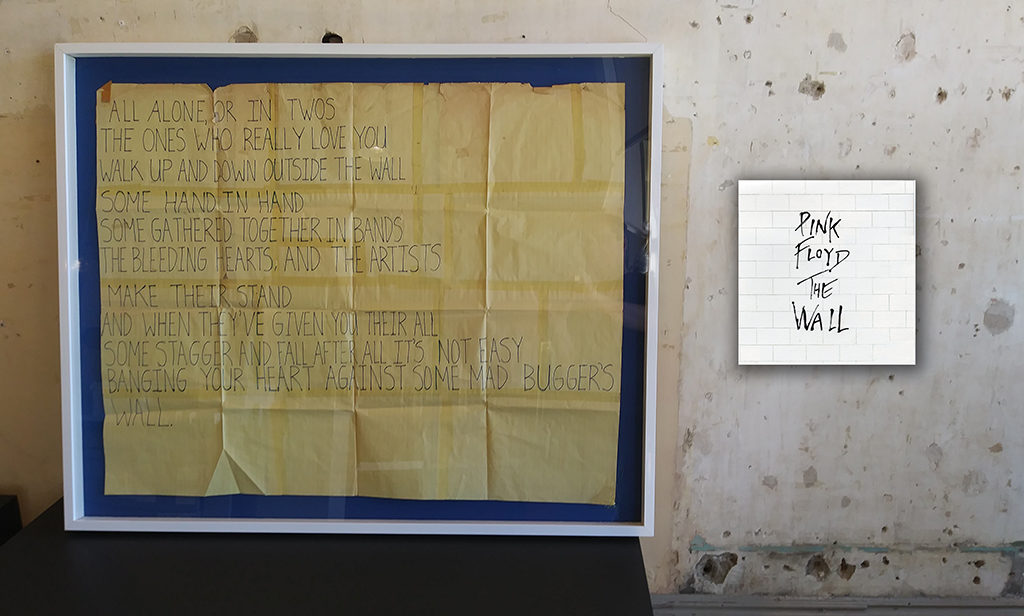 Roger Waters’ handwritten lyrics from “The Wall.” 40″x 50.”  “The Wall” album cover is depicted on the right. Click the image for a LARGER view.

Castillo was in the studio during the recording of Outside the Wall, the final track of the album. Roger Waters, co-founder of Pink Floyd had gone to a local hospital and selected a few nurses to come to the studio to do background vocals for the track.  The nurses needed some assistance in seeing the lyrics, so Roger Waters grabbed some legal paper, taped a bunch of sheets together, and then wrote the lyrics in large handwritten lettering so the nurses could see the copy as they recorded. He wrote:

All alone, or in twos
The ones who really love you
Walk up and down outside the wall
Some hand in hand
Some gathered together in bands
The bleeding hearts, and the artists
Make their stand
And when they’ve given you their all
Some stagger and fall. After all its not easy
Banging your heart against some mad bugger’s wall—Roger Waters

As Castillo came back to Gordy’s to check out the progress of the lyric sheet, he invited Perretta back to his home to see a few other items he wanted framed.

The artwork below is the master metal lacquer plate of Side 1 of “The Wall.” The master lacquer is created to make certain the recording will work without errors. For example, strong deep bass lines had a tendency to make the needle on a record player, “jump or skip.” The mastering engineer from the recorded master tapes “cuts” this lacquer plate. One the lacquer is approved, it gets plated and then the stamping process can begin for volume LP duplication.

The band members scratched their names into the master lacquer using some sort of sharp instrument. On the other side, (pictured) David Gilmour, lead guitarist and vocalist for the band, signed his name. 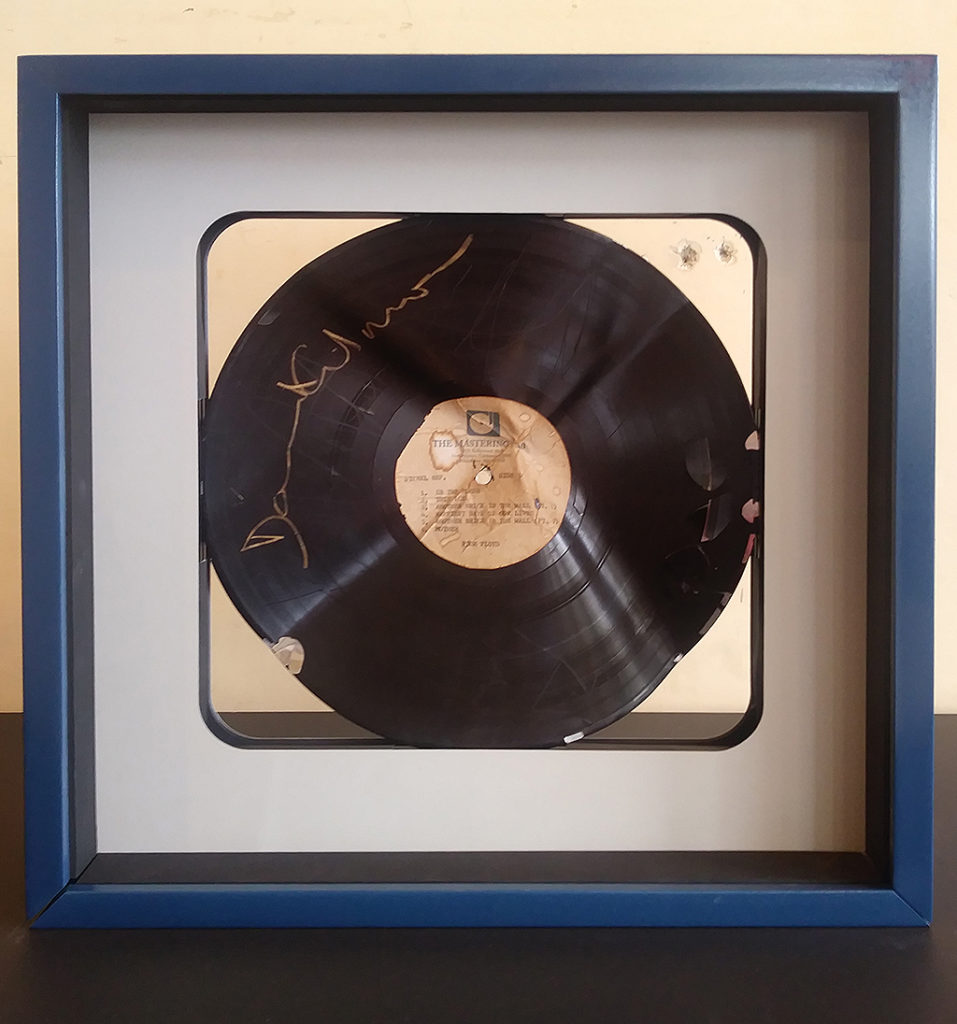 The Youtube video below features Outside The Wall and the nurses who sang the lyrics as backup singers.

According to Wikipedia, “The Wall” was a commercial success, reaching number three on the UK Albums Chart and topping the US Billboard 200 for 15 weeks. It became Pink Floyd’s second best-selling album, one of the best-selling of all time, and one of the most well-known concept albums of all time, and was adapted into a feature film.  By 1999, the album had sold over 23 million RIAA-certified units (11.5 million albums), making it the third-highest certified album in the United States. It produced three singles: “Run Like Hell”, “Comfortably Numb”, and the band’s only number-one single “Another Brick in the Wall, Part 2”. In 2003, Rolling Stone placed “The Wall” at number 87 on its list of “The 500 Greatest Albums of All Time“.