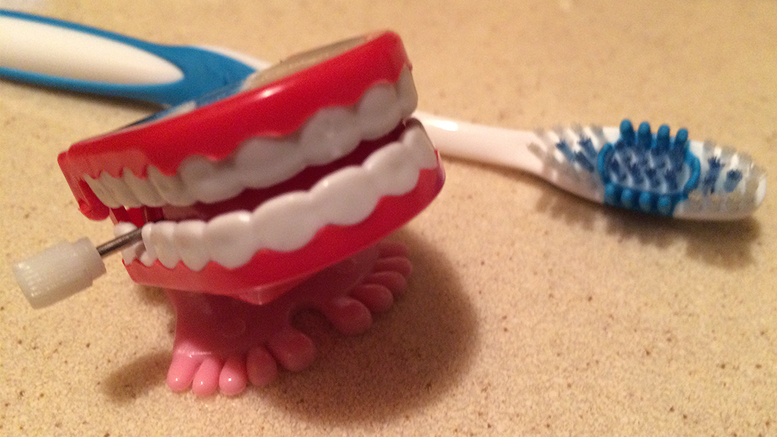 There’s no tooth tartar on these pearly babies. Photo by: Nancy Carlson

Just the other day I was lying in a dentist’s chair when an intriguing question came to mind: How did the stuff they scrape off your teeth wind up with the same name as the stuff they slather on fish sandwiches?

This is the kind of thing that keeps me wide awake nights.

It’s like, I hate tooth tartar, because it’s a hassle to have removed in the never-ending quest for dental health. On the other hand, I love tartar sauce. When I eat a fish sandwich, I want the tartar sauce practically dripping out the sides in thick, white globs that land on my pants.

What all this boils down to is the tooth-related conundrum many of us older folks grew up facing. Sure, we wanted nice teeth. But at what cost? When I was a kid, getting a dental checkup was absolutely the worst thing I could imagine. This was because back then, the dentist’s office reminded me of nothing less than a medieval torture chamber. The needles, hooks and other scary doohickeys were bad enough, but what really got to me was the drill.

I can still picture the drill, hovering above the chair like some hungry vulture waiting for its dinner to die. It was attached to a pulley-system that looked right out of a Frankenstein movie. It wasn’t hard to imagine the pulleys were extended to some sort of stationary bike down in the dark, dank  basement. When the dentist was ready to bore gaping holes in some poor kid’s teeth, he’d flip a switch to signal his hunchbacked assistant, Igor, to start pedaling.

That is why on frequent dentist visits, I would refuse to open my mouth. I don’t mean for a minute or two. I mean for the entire appointment. Mom would plead. She’d cajole. She’d try to bribe me with offers of new model airplane kits. With that drill in sight, however, nothing could make me open my proverbial pie hole.

Eventually, she resorted to having Dad take me to the dentist. Admittedly, he knew a thing or two about dental pain. Too poor to have received much dental care as a kid, after the Navy and college, he eventually needed a bunch of teeth pulled to be fitted for dentures. To save money, on at least one occasion he did it without that wimpy newfangled pain-killer called Novocaine. I still remember him shakily recalling how half-way through the procedure, the leery dentist asked if he wanted the pain-dulling shot yet? Dad, gulped, shook his head and maintained his pride.

Compared to him, I was an obvious wussy. But sometimes even Dad’s attempts to tan my hide in the dentist’s chair, cut off my supply of Chunky chocolate bars, or sell me to passing Gypsies couldn’t get me to open my mouth.

The time came, though, when as an adult, I decided to visit a Muncie dentist myself. The question was, would I open my mouth? I hoped so, seeing as I was paying for this visit myself, but there was no guarantee.  Upon entering the dentist’s office, however, my mouth dropped open and stayed that way. My old dentist’s hygienists looked like King Kong’s little sisters in scrubs. My new dentist’s hygienists  were not only nice, they were, for lack of a better description, “dental babes.”

It suddenly dawned on me that screaming, kicking and refusing to open my mouth for this guy might reflect poorly on the aura of machismo I was attempting to cultivate. Besides, it turned out my dentist was practically a comedian. He’d be drilling away and joking about all manner of stuff, as I was keeping  my mouth open from laughing my butt off. He made it fun! When he was finished, I was like, “Done already? You sure I don’t need some root canals?”

I could hardly believe it.

It turned out dentistry had undergone major changes in the years since I began neglecting my teeth. The chief one? No longer trained by psychotic Nazi spy interrogators, modern dentists were dedicated devotees of the “Have a Nice Day!” school of dentistry.

These days I go to another cool young dentist who is also a very nice fellow. Furthermore, the hygienists who work for him are also friendly and attractive. The end result is, I’m no longer afraid of having my molars messed with, nor any of my other teeth.

In fact, these days when someone says tartar, my first thought is about the tasty white stuff dripping onto my pants from my fish sandwich, not that gunk that used to be stuck to my teeth.