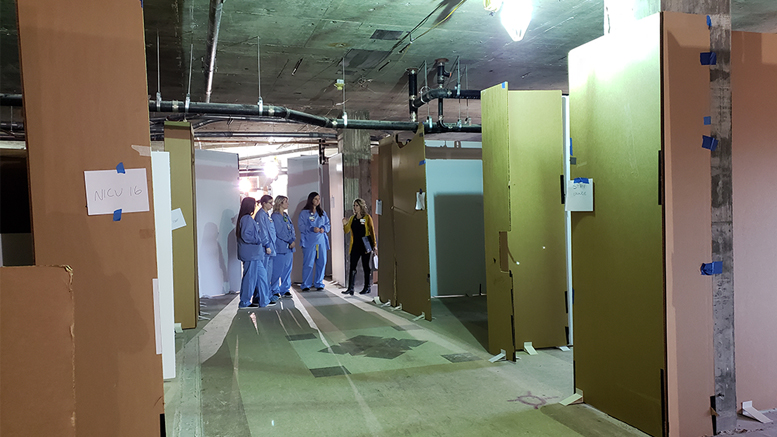 Muncie, IN—As remodeling continues at Indiana University Health Ball Memorial Hospital, recently five skids of cardboard stood floor to ceiling outlining the gutted 5th floor of the North Tower. This Cardboard City replicates the under construction 10thfloor of North Tower that will soon be the new location of Pediatrics and Women’s Services (PAWS) and the Neonatal Intensive Care Unit (NICU).

IU Health uses cardboard cities to test the designed layout, and workflow of staff and patients, before finalizing construction plans. 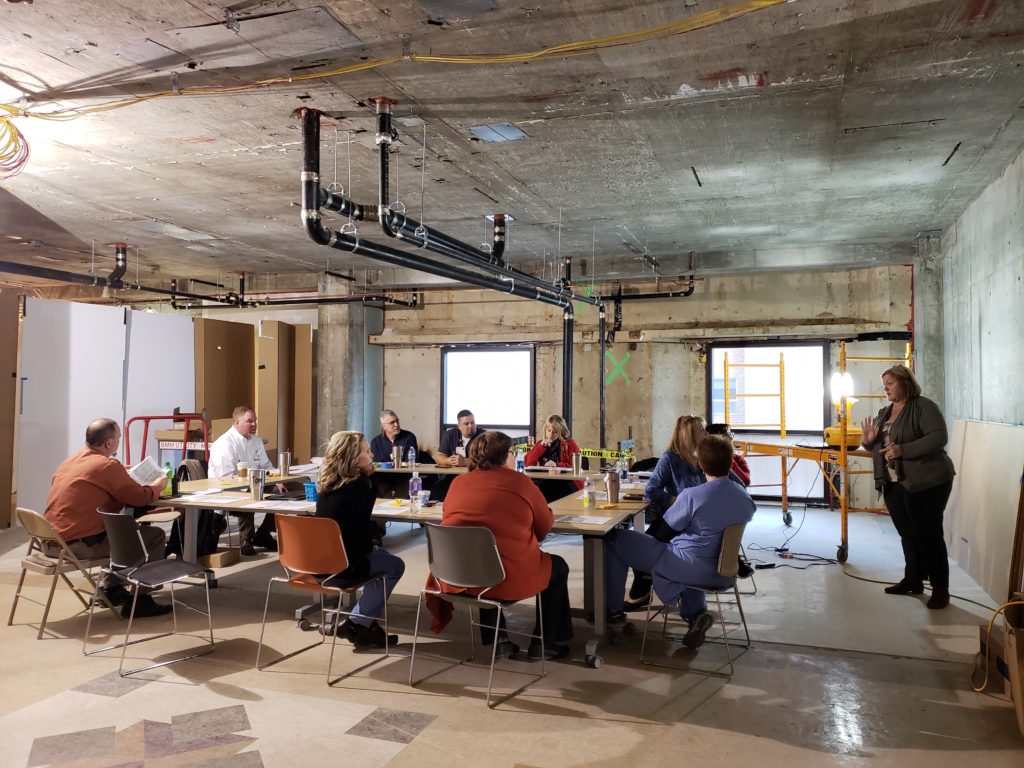 “It costs a lot less to test the layout with cardboard than to build and realize part of the design does not work,” said Ryan Herdegen, Senior Design and Construction Project Manager at IU Health Ball.

Herdegen said that after looking at a floor plan, it can be difficult to determine the shape and size in real life. Building it 3-D gives everyone a better idea of the space, and it opens the floor to feedback for concerns and what improvements to make to the design.

Using this cardboard city ensures the layout will allow team members to offer the best care for patients and intuitive.  This cardboard city also demonstrates how NICU and PAWS, currently located on the North Tower 4thfloor and East Tower third floor respectively, will merge in the new space.

Dana Fluhler, Administrative Director-Women and Children Service Line at IU Health Ball, said these patient-centered changes should make it easier for people to heal and loved ones to visit. Here is what will change:

All patient rooms on the 10th floor of the North Tower will be private rooms that have access to windows, which will provide natural light.

The NICU will go from having 16 beds for babies in one open bay on the fourth floor of the North Tower to 21 beds for babies throughout 12 private rooms and 6 private bays on the 10th floor of the North Tower. Three of the rooms will have two beds setup for twins, and four rooms will have parent bathroom and shower facilities. All private rooms will have a designated family area with sofas, recliners, cabinetry and televisions that will allow families to spend more time with their loved ones comfortably.

Fluhler said IU Health Ball will be the only Perinatal Level 3 facility in East Central Indiana, which means the facility will be able to care for higher risk maternal and infant medical conditions, including preterm patients under 32 weeks gestation.

IU Health Ball team members are still discussing what unit will be on the third floor of the East Tower.

“The remodel will be a huge asset to our hospital, community, and region, allowing families that need higher levels of care to stay closer to home,” Fluhler said.

Herdegen said actual construction of the 10th floor of the North Tower will start this May, and the plan is to have it completed by the end of 2019.

IU Health Ball Memorial Hospital serves as a tertiary referral center and teaching hospital for East Central Indiana and part of Indiana University Health. IU Health Ball Memorial Hospital is accredited by the Joint Commission and maintains 1.2 million square feet of facilities. It is part of an elite group of hospitals with Magnet designation for nursing excellence. More than 17,700 patients are admitted every year and more than 300,000 outpatient procedures are completed annually. Jeff Bird, MD, is President. Learn more at iuhealth.org/ball-memorial.