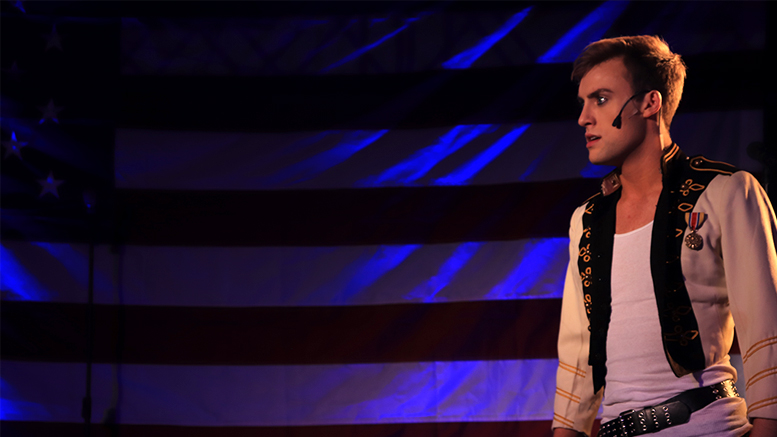 Muncie, IN—You are not going to find this stuff in your history books.

Muncie Civic Theatre will present the musical “Bloody Bloody Andrew Jackson” in the Casazza Family Studio Theatre Feb. 15-17, 21-23. Shows on Thursday, Friday and Saturday will begin at 8 p.m. and the Sunday matinee will begin at 2:30 p.m.

Director Jonathan Jensen said the irreverent musical “details the long and complicated life and legacy of Andrew Jackson in about 90 minutes.”

“I’ve always been a fan of the music in ‘Bloody, Bloody’ and the style of storytelling Alex Timbers and Michael Friedman used to write the musical,” he said. “The world they created is extremely heightened and delivers a complete experience as an audience member. I had listened the score numerous time and seen the production once about 5 or so years ago.”

Melissa Buckler is taking on a presidential role in the show, but not Jackson, our seventh POTUS.

“I play James Monroe, the fifth president of the U.S.A.,” she said. “He is one of the elite in Washington, and doesn’t approve of Jackson’s threat (his growing popularity) to the current administration.”

She prepared for this role by  “watching any video I could find where a woman tried to pass as a man.” “Thank you, YouTube,” she added.

Buckler said she was drawn to the musical “because I love the idea of retelling history in a new way, and reminding people how America was really founded is important.”

She called it a “dark (sometimes raunchy) comedic look at the life and presidency of Andrew Jackson,” adding that he was “emotional, unhinged, and his treatment of the Native Americans was appalling.”

But she wants audiences to know that “we take all of it seriously. Even the parts where we are laughing on stage. This story is important and valid today.”

Jensen, who is co-directing the show with his wife, Jessica, agreed and said those planning to see the show (and you should) need to “buckle up.”

“You won’t see this on the History Channel,” he added. “More importantly, the story is still, albeit unfortunately, very relevant to the current challenges we are facing in modern times. The show may be masked in comedy and a hyper-stylized depiction of the 19th century, but beneath the surface there is a nuanced examination of America’s evolution and progress (or lack thereof) as a nation.”