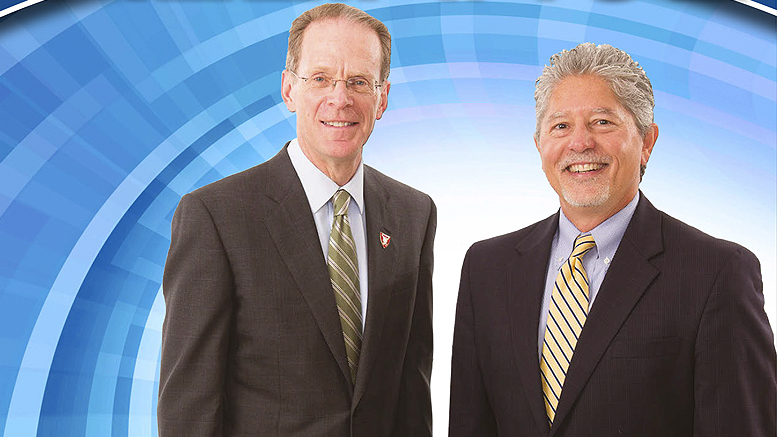 Editor’s Note: The following is an excerpt of an article that appears in the Fall 2018 Edition of Alliance Magazine, published by the Muncie-Delaware County Economic Development Alliance. A PDF of the entire article and full Fall Edition of the magazine can be viewed from the link at the very bottom of this article.

Muncie, IN—That’s a question officials have been mulling over this year. Their ponderings led to a new ad hoc group whose aim is to answer them. They’re trying to establish a robust and vibrant vision of the “Next Muncie”—a future city nurturing a vibrant core, where everything’s connected and options for education, healthcare, local travel, work, recreation and culture all happily collide.

Next Muncie is a hand-picked, 10-member group representing this area’s private, public and philanthropic sectors. Their aim, via Next Muncie’s Central City Leadership Team, is to leverage the community’s already robust sense of place, existing infrastructure  and leadership. With that lever, they plan to boost a few key projects that will help further redevelop and revitalize Muncie’s central city connecting the campuses of its two largest employers, Ball State University and IU Health/Ball Memorial Hospital, with the rest of downtown.

“(Next Muncie) is kind of a brain child of a few community leaders,” Bird told Alliance. “Geoffrey Mearns and I began getting to know each other and spending more time learning who each other are and the roles we’re playing. Eventually, we decided to approach the Mayor and other leaders of local economic drivers … So we sat down with Muncie Mayor Dennis Tyler, Jud Fisher of the Ball Brothers Foundation and just talked about how we might be able to add some leadership in order to help coordinate some of the great work going on around here.”

The four men chose six others from the Muncie area, rounding out the Central City Leadership Team. They soon formulated a vision statement to guide Next Muncie’s efforts. That statement reveals their goals: “Muncie will emerge as a vibrant city that attracts and retains residents and visitors by providing high-quality employment opportunities; by revitalizing neighborhoods that offer healthy lifestyle choices; and by fostering an innovative culture of entrepreneurship, education, healthcare, arts, entertainment and recreation.” 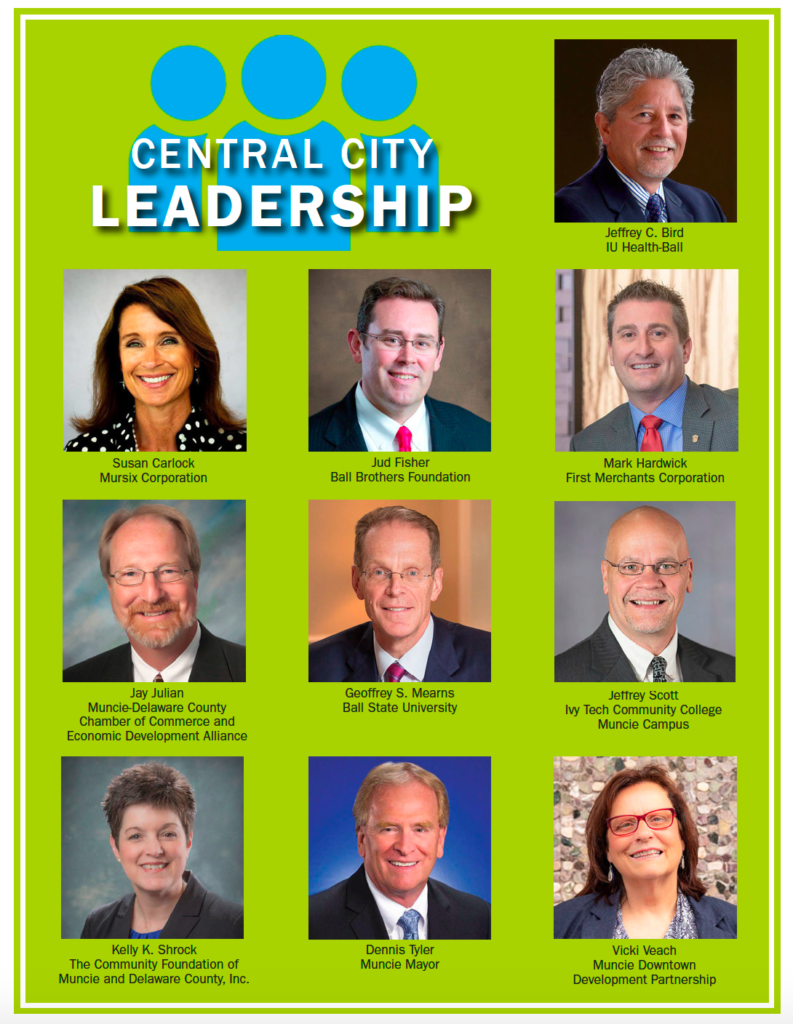 Some might wonder why, with effective economic development entities already in place, is such a group necessary. The answer to that question lies not in the need for short-term projects that add jobs and attract new businesses, but in  long-range projects that help renew the city’s central beleaguered areas, replacing decay and blight with thoughtful  growth that compliments and underpins  Muncie’s place-based strengths. This work correlates to the Economic Development Alliance’s Vision 2021 plan set forth by the community.

Vandewalle & Associates, a Wisconsin based public relations firm assisting the group, describes Next Muncie’s efforts as “catalytic redevelopment,”or projects that naturally play to the city’s existing strengths, gaining momentum from an already-flowing energy ignited by previous revitalization. Bird believes the volunteer group’s efforts will help the community connect the dots, so to speak, fusing the central city’s growing synergy with long-view development projects that will inject new life into blighted and inactive parts of Muncie’s core. 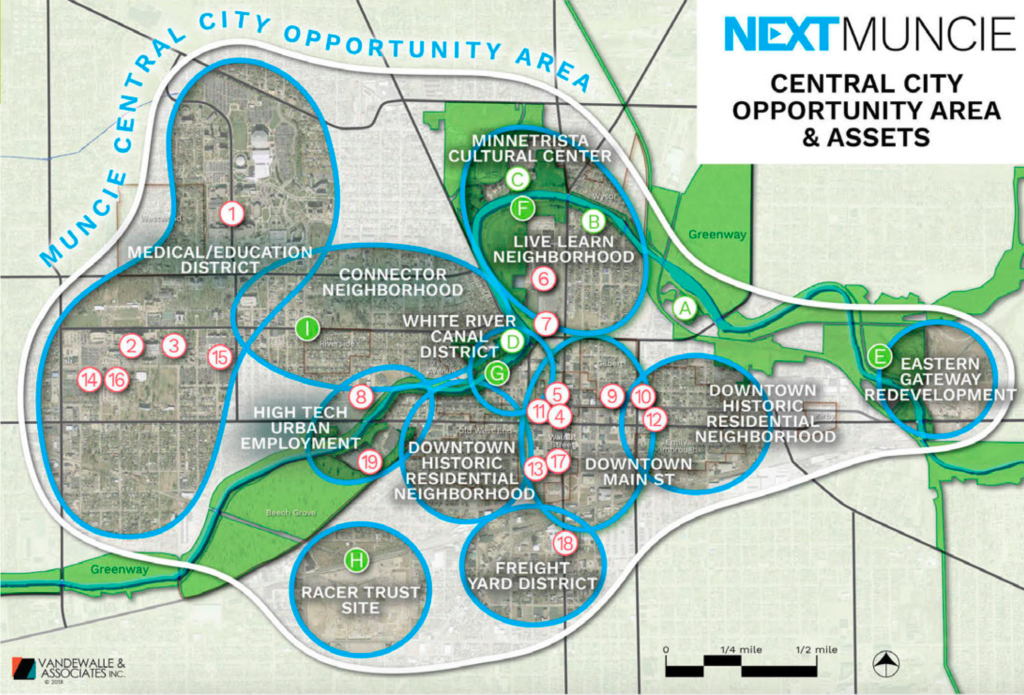 In trying to better understand the mechanics of the projects they’re pursuing, Vandewalle representatives provided the team with an example of a similar effort underway in Waterloo, Iowa. There, officials also want urban revitalization that uses a nearby river as a linch- pin to connect struggling areas. Bird said leadership team members came away from that presentation optimistic.

Unlike Waterloo, Bird said, Muncie already has many of the necessary components for success–components they’re still trying to establish out in Iowa.

“We’re starting off in a much better place,” Bird told Alliance. “We have infrastructure, leadership and other things important to quality of place that are already in Muncie. We have a great outdoor venue downtown.  We have successful Rails-to-Trails projects. The ‘med- ed’ district leadership is already on board. We have Opportunity Zones already established. We are years ahead of where they started and we are hitting the ground running. But, there’s still lots of work to be done. We feel like we’ve got some infrastructure already established that sets us up for potential successes.”

A primary Next Muncie goal is bridging the so-called med-ed district with areas on the east side of downtown that they’re planning to partially revitalize via a riverfront housing complex and retail hub. Thiswould bring modern buildings and new residents to a less active side of the central city. Yet, it would be directly connected to the med-ed district via streets, trails, sidewalks, etc.

Their hope is that by adding attractive, new housing along the White River, as well as with recreational opportunities like Cardinal and White River Greenways and downtown entertainment options, Muncie will emerge as a place early careerists find appealing as a place to live and work.

“Quality of place is essentially foundational to attracting and retaining early careerists,” Bird said, referring to young professionals in search of a place to call home. “We have confidence  that the demographic of people who work at IU Health/Ball Memorial Hospital and Ball State University are demanding more options for  mixed use communities. We want to be in a position to offer them things they demand in the communities where they want to live and work.”

Ball State University President Geoffrey Mearns echoed Bird’s thoughts about luring new residents and said some of them could be living in brand new riverfront housing units within the next few years.

“I believe we can be cautiously optimistic that, as early as 2020, there will be residential units at that particular (White River) site,” Mearns said. “That means apartment living with decent amenities to include retail, restaurants, access to downtown, access to the river and the White River Greenway.”

Central City Leadership Team member Vicki Veach has, for decades, been a proponent and cheerleader for Muncie-Delaware County, helping in various capacities to land some of the area’s most exciting attractions. Now in her seventh year as executive  director of the Muncie Downtown Development Parternship, Veach thinks Next Muncie’s goal of establishing more modern housing in the city’s core is essential to future success.

“We  have very few options for housing in the core of downtown,” Veach said. “So when we try to attract employees from the hospital or university we’re extremely limited in our offerings.”

With projects addressing that specific  hurdle on the front burner, Veach said optimism for Muncie- Delaware County’s rebirth should be high.

“Next Muncie brings some needed sustainability to all of the visions and plans that are currently in place for the downtown area,” Veach said. “This will help us build stronger collaborations and connections with other individuals and groups involved. All of this will contribute to the success of the central city and Muncie in general, including getting more people to live downtown. The potential for Muncie, going forward, is exciting.”

You may view the entire article and see the full 2018 Fall Edition of the Alliance magazine, by clicking (or tapping on your screen if using a smartphone or tablet) on the magazine’s front cover image below. 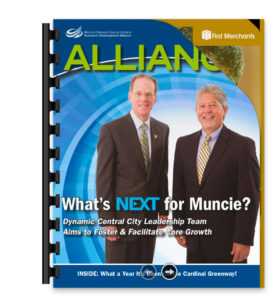