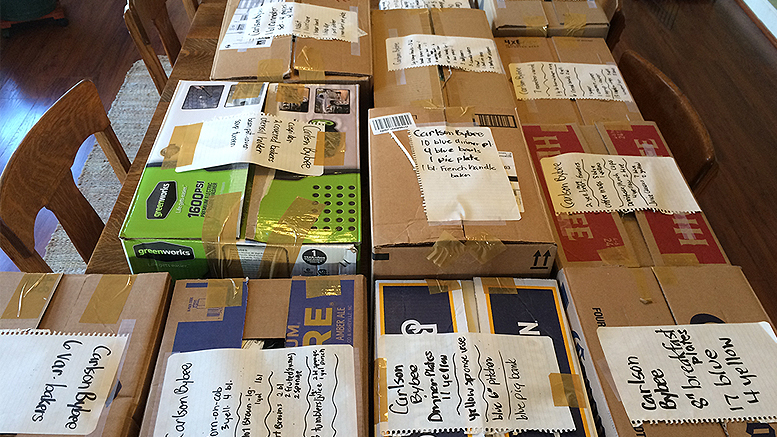 For anybody who read my column about the end of Bybee Pottery last Friday (see column below) and wished they had the opportunity to buy some, I have good news.

Well, sort of wrong. Yes, the historic Bybee Pottery shop in Waco, Ky., that had opened in 1809 did close its doors to the public in 2011. What I hadn’t counted on, and didn’t know about, was that two members of  Bybee’s founding Cornelison family – Ron Stambaugh and Jimmy Cornelison, both longtime employees  – took it upon themselves to keep producing the pottery.

“We just do it in a smaller amount,” said Ron, who had been understandably upset by my premature announcement of Bybee’s demise. In its heyday, Bybee produced three kilns a week worth of pottery. Now, Stambaugh and Cornelison produce a kiln of pottery every six weeks or so. That doesn’t mean Little Bit of Bybee is low on stock, though.

Visiting the shop’s website, Bybeepottery.com, reveals a wide range of pieces available in multiple colors, along with things like baskets, bees wax candles, specialty food items and more. Folks can visit the shop, or order Bybee products on line.

By the way, the pottery is made with the same red clay that it has always been. It’s even fired in the same kiln, and comes out with the same slight imperfections that collectors treasure as proof of its handmade originality.

Due to her predilection for emptying shelves, my wife Nancy’s collection of Bybee Pottery will be hauled down to Little Bit of Bybee in a few days. I, for one, am kind of sad to see it go. 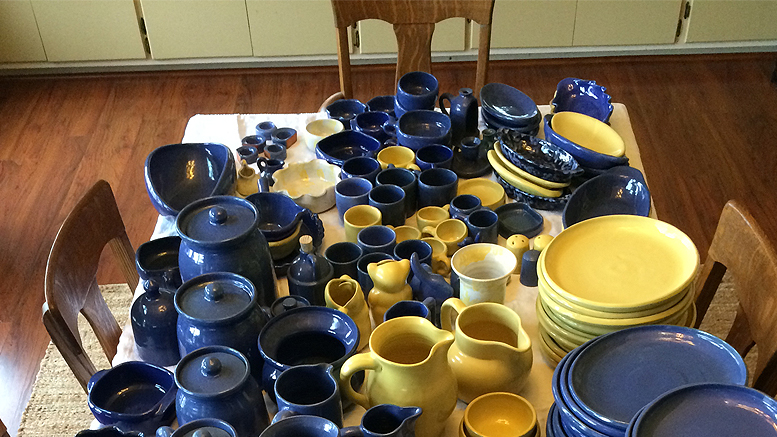 My wife and I have been living with Bybee for many years now, but those days are coming to an end.

No, Bybee isn’t some creepy relative we’re finally kicking out of the house.

Nancy and her free-spirited Lutheran girlfriends spent years collecting Bybee Pottery. So devoted were they, my workaholic professor-of-a-wife once played hooky from Ball State to shop there, claiming she was heading south to lecture students at Eastern Kentucky University. Driving through EKU’s  campus, she rolled down her car window, hollered, “Don’t smoke!” and rolled it back up.

The ladies would leave Muncie in the evening, drive through the night, then get to the red clay of the Bluegrass State near Waco at two or three o’clock in the morning. Then they would follow the ritualized customs of Bybee shoppers.

Using some sort of personal item, they would mark their place in a line of other such personal items forming outside the Bybee shack’s locked front door. These personal items would hold their places in line while they slept back in their cars until seven o’clock or so. About then they’d mosey across the highway to the Stop ‘n’ Go for coffee and doughnuts. When the pottery shop’s door finally opened at eight, they joined the swarming horde of fellow Bybee-crazed females rushing inside and begin grabbing every piece they could lay their hands on, whether they wanted it or not.

Within minutes, the hundreds of pieces that had been stocked on the shelves were claimed.

Then, their loot securely piled at their feet, the ladies would begin trading. In honor of my Swedish heritage, Nancy collected only the blue and yellow pieces matching the colors of Sweden’s flag. If the woman on the dirt floor several places to the left had blue or yellow pieces, Nancy would trade whatever pottery she’d gathered for them. Soon the women were all bargaining with each other for rust reds and forest greens or whatever colors they collected. Before they headed to the cashier after an hour or two, they would have the pottery they wanted, or at least had settled for.

By late afternoon, the pottery-laden ladies would have driven back to Muncie like conquering heroes.

And why not? They’d successfully made another nighttime trek to a place that first opened its doors in 1809. That was the same year some skinny, ambitious kid named Abe Lincoln was born just a bit over yonder. Bybee’s kiln was the inside of an old railroad car, for crying out loud. The pottery business had been in the Cornelison family for six generations. Almost as impressive, at least for rock ‘n’ roll aficionados, was Buzz Cornelison, who’d be inside wrapping customers’ pottery in protective pages of newspaper. In faster, more exciting days, Buzz had been a member of the band Exile, whose hit “Kiss You All Over” had helped steam up the windows of countless kids’ parked cars.

Bybee Pottery – to which Nancy had been introduced by the Muncie friend she considered Bybee’s leading diva, Dondra Bennett – was just plain cool to be connected with.

On reflection, I now consider this a minor American tragedy. It’s not that Bybee Pottery was so beautiful. It wasn’t. It was primitive. It was functional. It was cheap. In part, that’s because the dishes didn’t stack well, each being infinitesimally different from the others spun on those busily whirling pottery wheels. But, man, that place was a working, breathing history lesson.

The guy Nancy is selling hers to is a Bybee dealer, a tough line of work when there’s no Bybee Pottery being made anymore. Located near Louisville, he buys what Bybee he can get his hands on. Nancy’s haul amounts to about 200 pieces. Twenty years ago, over multiple trips, she paid about seven-hundred-and-eighty bucks for all that stuff. What it’ll fetch now is anybody’s guess.

The other day when I asked why she was selling it, she mentioned two new cultural phenomena. The first was “Swedish Death Cleaning,” which may be my ancestral homeland’s most popular export since Swedish meatballs. Put bluntly, it means ditching your junk before your kids have to do it for you. The other movement involves a Japanese woman named Marie Kondo, who is a TV-show neatness guru.

Hold a household object, she suggests, and ask, “Does this bring me joy?” If it doesn’t, pitch it.

So recently Nancy asked herself that question, her face pressed to the bottom of a big Bybee bowl, and decided it didn’t bring her joy. In a blind panic, I ran for the only piece of Bybee I own – a little blue jug full of Jim Beam bourbon, capped with a cork –  and sighed with relief when it still made me happy!

Anyway, it’s goodbye Bybee at our house now. But in the back of my mind I picture us sitting side-by-side on the couch fifteen years from now, watching “Antiques Roadshow,” when some goober with a familiar load of blue and yellow pottery learns it’s now worth millions. As Nancy faints, I smile wryly and think, “Told you so.”