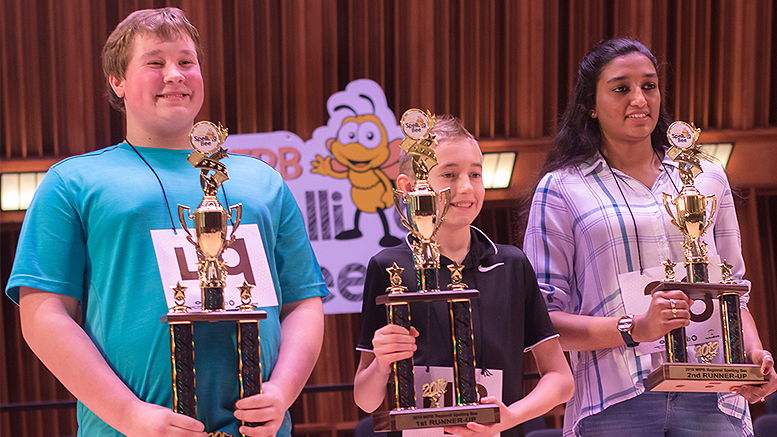 Muncie, IN— After 35 rounds, Andrew Toney spelled his way to the top spot at the fourth WIPB-TV Spelling Bee.

After the competition ended, Toney, a student at Lee L. Driver Middle School in Winchester, said he was feeling “very nice.”

Toney, a seventh grade student, will now go on to compete in the Scripps National Spelling Bee in May near Washington, D.C.

The first runner-up was Trooper Bullock from Wes-Del Jr./Sr. High School and the second runner-up was Mahathi Raju, a student at Yorktown Middle School.

WIPB broadcast the regional bee LIVE. You can watch a recording of that broadcast at www.wipb.org.

Ball State University Teachers College generously contributed the funds to cover the Scripps fees for all of the schools to participate. Anita Welch, Associate Dean of Ball State Teachers College was one hand to watch the competition and congratulate the winners.

“These are our future, all of these students,” she said. “It is our obligation as educators to help them succeed in all their aspirations.”

Toney was first runner-up in last year’s WIPB Spelling Bee and through the Scripps RSVBee Program, he traveled to the national competition. RSVBee was launched by the Scripps National Spelling Bee last year to provide an opportunity for more spellers to participate in the National Finals in the Washington, D.C. area. The invitational program provides an additional path for spelling champions to experience Bee Week and compete in the national finals.

Presenting sponsors of the 2019 WIPB Spelling Bee were Family Vision Care and MutualBank. Other supporting sponsors include Avila Orthodontics;  Dr. Leland C. Wilhoite, DDS, and Boyce Systems. Our Speller Shirts Sponsor are the employees of Navient and the Championship Word Sponsor is The Muncie Optimist Club