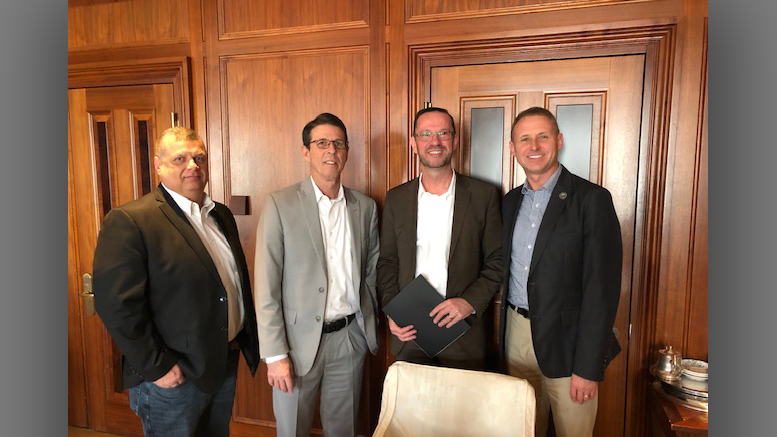 Delaware County, IN—Delaware County officials concluded a seven day trip to Germany and the Netherlands on Thursday, April 18th.  County Commissioner James King along with Brad Bookout, Director of Municipal and Economic Affairs, and Bill Walters, Director of the ECI Regional Planning District facilitated meetings with several companies and trade organizations who have an interest in establishing and or promoting Indiana as a location for development or expansion.

The busy schedule consisted of meetings with the Transatlantic Business and Investment Council, the Chamber of Commerce from both Brandenburg and Munich Germany, the Investor Acquisition team at the U.S. Embassy in Berlin, the U.S. Consulate in Munich, as well as multiple mid to large sized German companies with interest in the United States.  In addition, the team met with the site selection company Pons Atlantic Partners and were presenters to over thirty businesses taking part in the USA Masterclass, “Doing Business in the U.S.” event in Amsterdam. During the meetings, two German companies with the need to expand operations to North America pledged to visit Delaware County as early as this summer.

Currently, Europe represents one of Indiana’s largest regions for foreign direct investment and trade ties. Over 450 European businesses currently call Indiana home.  This accounts for employment of almost 113,000 Hoosiers and the number continues to grow.  Having had success with a trip to Italy in 2018, the Delaware County delegation has saw positive signs and increased interest from European businesses. Indiana and the Midwest in general is an attractive area for foreign companies to invest.  CNBC recently ranked Indiana as one of the top three states for the lowest cost of doing business and the lowest cost of living. Indiana’s total manufacturing output in 2018 exceeded $98.4 Billion and 7,076 companies exported in excess of $37.8 Billion in
goods and services.

In conclusion, the Delaware County team is focused on attracting investment that will diversify the local economy, increase the tax base, provide a range of employment opportunities, act as a multiplier for local businesses and increase our region’s global footprint.