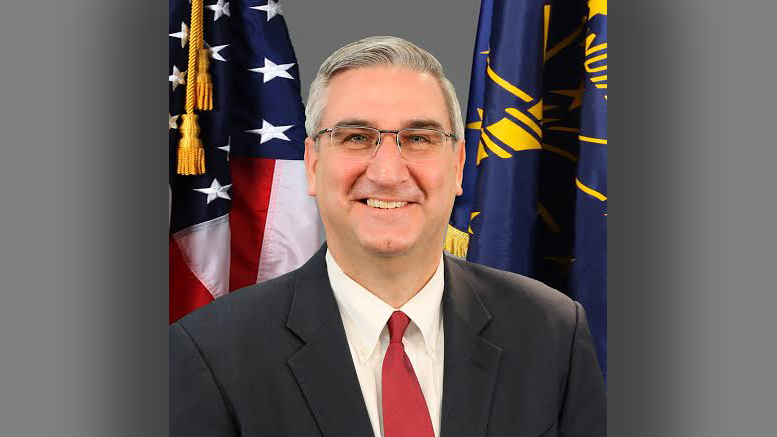 By: Ball State Marketing and Communications—

Muncie, IN— Indiana’s top elected official will give the keynote address at Ball State University’s Spring Commencement on May 4, 2019.

Indiana Governor Eric Holcomb will speak during the ceremony, which begins at 10 a.m. on the Arts Terrace. About 3,200 Ball State graduates are expected to receive their diplomas. It is the first time an Indiana governor will give an address at Ball State’s Spring Commencement while in office.

“We are very grateful to Governor Holcomb for speaking to and inspiring our graduates and their families,” said Ball State President Geoffrey S. Mearns. “The Governor has supported higher education and Ball State during his time in office. We look forward to Governor Holcomb joining us as we celebrate this major achievement in the lives of our students.”

Governor Holcomb said he is eagerly anticipating his visit to the Ball State campus on such a special day.

“Ball State University has been inspiring students for 100 years, and I’m honored to speak to this historic Centennial graduating class,” Governor Holcomb said. “As these students embark on fulfilling careers, I am excited to celebrate this major milestone in their pursuit of lifelong learning.”

President Mearns noted that Governor Holcomb’s wife, Janet, who is a Ball State graduate, has been a longtime supporter of the University. During Ball State’s Centennial Celebration this academic year, Mrs. Holcomb attended a special kickoff on campus in September, rode in the Centennial-themed Homecoming Parade, and hosted a luncheon at the Governor’s Residence in Indianapolis for 18 high-achieving students presented full scholarships to fund their final year of study.

“I’m grateful to the Governor and the First Lady for their continuous support for Ball State, especially during our Centennial,” President Mearns said. “It’s a privilege to call the Holcombs friends and supporters of our University. They are an inspiration to the Ball State community.”

A lifelong Hoosier, Governor Holcomb is a veteran of the United States Navy, served as the state’s 51st Lieutenant Governor, was a trusted advisor to both Governor Mitch Daniels and U.S. Senator Dan Coats, and is a former state chairman of the Indiana Republican Party. The Governor is a graduate of Pike High School in Indianapolis and Hanover College in southeastern Indiana, where he majored in U.S. history with a focus on the American Civil War and the Reconstruction Era.

The First Lady grew up on a horse farm near Muncie. She also developed a love of the arts, particularly drawing, early in life and went on to complete her bachelor’s and master’s degrees in fine arts at Ball State. As a master’s candidate at Ball State, the First Lady also held a graduate assistantship with the David Owsley Museum of Art. Mrs. Holcomb now runs a family business in Madison County.

The Arts Terrace has been the site for Ball State’s Spring Commencement since the early 1940s. Tickets are not required. The processional begins at 9:30 a.m., with lineup at 9 a.m. The ceremony begins at 10 a.m. The event will be streamed live at bsu.edu/live.

In case of inclement weather, the ceremony will be at Worthen Arena.

Founded in 1918 and located in Muncie, Ball State is one of Indiana’s signature universities and an economic driver for the state. Ball State’s nearly 22,000 students come from all over Indiana, the nation, and the world, and its 780-acre campus is large enough to accommodate premier facilities and 19 NCAA Division I sports but small enough to ensure the friendliness, personal attention, and access that are the hallmarks of the University.