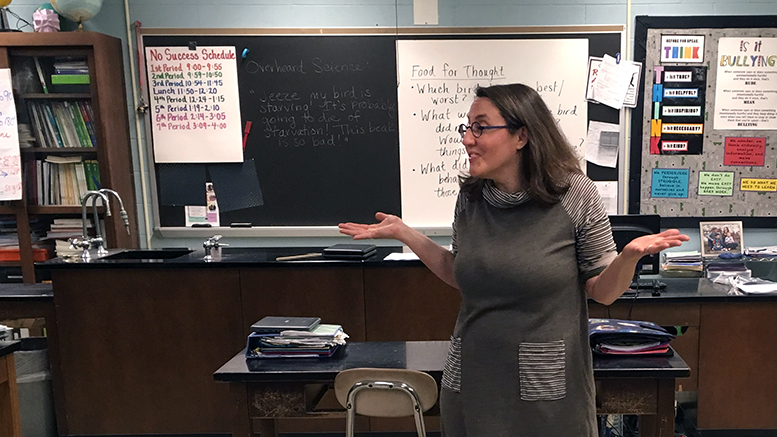 Nominations from public schools across Delaware County were reviewed by a panel of veteran teachers, administrators, college professors, and education experts. Members of the BBF staff then conducted interviews with the top candidates and visited candidates’ classrooms. Now in its seventh year, the Award is designed to honor outstanding public school teachers in Delaware County who bring innovation, enthusiasm, and 21st century skills into the classroom.

“Each of our three finalists share common approaches to teaching that are preparing Delaware County students for success in the real world. They teach with great passion, but even more importantly, they create learning environments where students are required to think critically, problem-solve, and collaborate,” reflected Ball Brothers Foundation’s president and chief operating officer Jud Fisher.

“Ultimately, it was Erica Collins who was selected as the 2019 Award winner,” continued Fisher. “Her classroom at Northside Middle School is one of high expectations and engaging, hands-on learning. Erica is driven by a sense that her students will grow into adulthood in a world of rapid technological change. She is preparing her students to think creatively, to collect and synthesize information, and to justify their decisions and ideas. Simply put, her classroom is a place of joyful exploration.”

Collins’ background includes teaching elementary school on the west coast and three years of teaching in Muncie. She addresses students in her middle school science classes as “scientists.” Her “scientists” collect data, record observations, and draw conclusions in written reflections that Collins uses to help assess student learning. This is rooted in Collins’ deep belief in the importance of helping to hone students’ writing skills in order to prepare them for future career success.

In addition to her role as a teacher, Collins and her family are active Muncie residents who are engaged in their neighborhood association, church, and sports activities. Collins also serves as Northside Middle School’s GEAR Up coordinator, a Purdue University after-school program focused on STEM (Science, Technology, Engineering, and Math) activities.

While Collins will be recognized with a $15,000 grant divided equally between the school district, Northside Middle School, and Collins’ classroom, the two award finalists will each benefit from a $1,000 grant award to be spent in their classrooms. Profiles of each of the three 2019 Excellence in Teaching Award honorees will be featured on BBF’s Facebook page in the coming days.

Ball Brothers Foundation’s announcement of this award is made in conjunction with National Teacher Appreciation Week which is celebrated each year during the first full week of May. Collins joins six other award winners from previous years:

The Excellence in Teaching Award is one of two competitive awards given by Ball Brothers Foundation each year. The other award—the John and Janice Fisher Governance Award—honors an outstanding board member of a Delaware County non-profit. Nominations for the Fisher Governance Award are due August 15, and details are available at ballfdn.org.

In addition to these awards, Ball Brothers Foundation makes grants to non-profit organizations totaling over $7 million annually. Grants are primarily awarded to organizations in Muncie and Delaware County, though limited funding is directed to organizations at the regional and state level. Grants support arts and culture, education, the environment, health, human services, and public affairs.